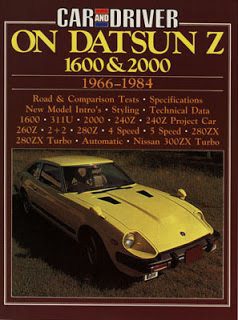 Car&Driver names their 10Best. A few dozen auto websites and blogs tell you about it straight away. GoodCarBadCar gives you more than that. Sure, the 10Best are named below, but so is an interesting fact about each. I do declare, GoodCarBadCar’s own awards will be revealed beginning on the 20th of this month thru till New Year’s Eve.

Car&Driver differs from many print publications in their award formats. So many place great distinction upon one new car. The problem therein? What if that one new car wouldn’t have cut the mustard amongst the previous year’s competition? That would be embarrassing. Also, is there really only one notworthy car displayed each year? No, there’s plenty. We live in a great age for automotive ingenuity.

So, if you were a member of C/D’s 10Best last year – come on back, y’all. If you’re new or significantly revised and below the maximum price limit (2X the average price of new cars sold in America), come on down. Eight – yes, eight, of last year’s winners made it back onto C/D’s list.

BMW 3-SERIES: 17 straight years for the 3-series in 10Best, aided no doubt by a turbocharged 6-cylinder that outmuscles a 90’s-era M3 and can manage a tussle with last year’s M3.

CADILLAC CTS: The CTS just happens to be MotorTrend’s Car of the Year and the only direct 3-series competitor on the list. Although priced like a 3, the CTS is sized like a BMW 5 and can honestly stand toe to toe with both.

CHEVROLET CORVETTE: If 430 horsepower isn’t enough, but 505 is way too much, one simple option box ‘check’ gives you 436.

CHEVROLET MALIBU: Stuck in the past, the 4-cylinder engine is still mated with a 4-speed auto. However, the 6-cylinder/6-speed auto combo is world-class.

HONDA ACCORD: Seemingly ordinary, the Accord now offers 200 horsepower more than the original 1976 Accord.

HONDA FIT: The next Fit has already debuted, but the current Fit can hustle through C/D’s lane-change test faster than a Ferrari F430 Spider. Deal with the rough ride, folks. It’s worth it. 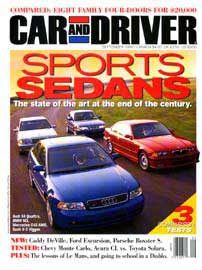 MAZDA MX-5: The optional hardtop can be lowered in 12 seconds, adds just 79 pounds to the featherweight Miata, and doesn’t take sole possession of your trunk.

MAZDASPEED 3: The turbocharged, hatchback 3 forces its front wheels to deal with an extra 130 lb-ft of torque as compared with a ‘regular’ 3, itself a pretty decent little hatch.

PORSCHE BOXSTER/CAYMAN: Since coming into existence in the 90’s, the Boxster has seen horsepower upgrades ten times.

VOLKSWAGEN GTI: Apart from 197bhp, awesome seats, wicked 5-spoke wheels and a communicative nature, the GTI also has the advantage of awesome commercials.