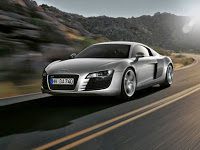 British car magazine, CAR, whose editors proclaim on the cover that they offer the definitive view, has named their Performance Car of the Year.

If you’re looking for consistently sound opinion, CAR may not be the place for you. Once known and perhaps even renowned for a magazine that centred on dynamic peformance, CAR has evolved into what seems to be a car-as-a-conversation-piece style magazine, with none other than Piers Morgan contributing.

Nevertheless, the PCOTY feature is certainly suggested reading. The Audi R8 was joined in the final three by the BMW M3 and Honda’s Civic Type R. The Audi overcame some high-strung group members (Caterham 7 R400, Lamborghini Gallardo Superleggera, Porsche 911 GT3 RS) and the M3 and Civic didn’t put up enough of a challenge.

Having already battled the Renault Clio F1 Team R27, Vauxhall Corsa VXR, and a Mini Cooper with Works package, the CTR was relegated in the final round despite obvious credentials. “A great hot hatch…. but not quite torquey or communicative enough to feel really special in this company,” said the judges.

And the M3? CAR says: “Because, as good as it is, it doesn’t move the M3 game on massively. Yes, it’s quicker than the old car, more refined, practical and as sideways as ever, but we expect all those things from the M3.”

So the R8 takes the crown. One paragraph by Chris Chilton makes very clear the overall reasoning for Audi’s win. “And then I pointed the R8 home and knew we picked the right car….. The icy white markings on the dials glowed back from the dash, the Bang and Olufsen hi-fi murmured quietly, and I tried to figure out how this car costs only £76,000. It’s still a lot of money in anyone’s reckoning, but not for a car of this calibre. In the context of an M3 that costs £50K, a Lamborghini that shares many of the R8’s parts and costs over three times as much, and a Porsche that costs £94K but can’t be driven in the rain, the R8 easily cements its place as a worthy winner.”

In order of their lap times around the Cadwell Park circuit (as driven by British Touring car great Matt Neal), here are CAR’s candidates and a brief summary by CAR and the inevitable GoodCarBadCar take as well.

PORSCHE 911 GT3 RS: “Even Neal thought it was too hot to handle; naturally we wanted to marry it.” GCBC says: “A regular GT3 is enough 911+, the RS adds way too much cost for way too little improvement.”

CATERHAM 7 R400: “Like being hardwired into the tarmac; if lapping circuits is your thing, nothing beats it.” GCBC says: “Proof that a little less weight will do you good.”

LAMBORGHINI SUPERLEGGERA: “Couldn’t beat the GT3 on the road but was even more exciting on track.” GCBC says: “Amazing that extreme examples of extreme cars can face such competition now, such as the GT3 RS, Ferrari 430 Scuderia, and 911 GT2.”

AUDI R8: As happy chasing Lambo’s on the track as tailing eVextra’s on the M25. Brilliant.” GCBC says: “Audi now has more than power, looks, and Quattro on its side; the R8 is a pure driving experience.”

BMW M3: “We still don’t like the steering but what fun – and what an engine!” GCBC says: “The original M3 had a four fewer cylinders and a lot less luxury…..”

SUBARU IMPREZA RB320: “Last of the saloon Impreza’s divided opinion. Mighty fast but hard work.” GCBC says: “Showcasing passion that may never be revealed on the new WRX’s or STi’s.”

NISSAN 350Z: “Quick, but far from the sideways here at Cadwell its roundabout antics suggest.” GCBC says: “The Z, as usual, laps with the big dogs for a substantially smaller cash outlay and looks good doing it.”

AUDI S5: “Old style Audi – safe and competent but not fun on track; A5 TDI better on road.” GCBC says: “Not fun on track, true. But stinking fast and heart-wrenchingly beautiful.”

HONDA CIVIC TYPE R: “Almost racer-like in its responses but amazing VTEC engine needs another 40 bhp.” GCBC says: “Needs a communicative chassis and steering before it needs another 40 horsepower, but it looks sweet.”

RENAULT CLIO 197 F1 TEAM R27: “A proper oldschool hot hatch and great at Cadwell; but hardwork on the road.” GCBC says: “If the weight remained equal to that of the old Clio, then the long-titled new Clio would be in with a shout.”

VAUXHALL CORSA VXR: “Torquey engine and smooth ride great on road but VXR outclassed on circuit.” GCBC says: “Have you seen this little sucker go ’round the Nurburgring?”