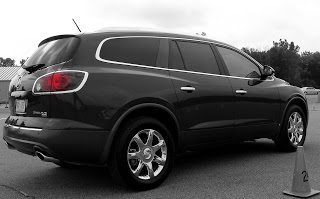 Search… I mean, search, for another automotive blog where a young import-loving guy posts twice in one afternoon; consecutively; where the titles both feature the name Buick. Email goodcarbadcar@gmail.com if, not when; you find one.

And we ain’t joking around. Nor does the joke start at the next sentence. The Enclave is good. I apologize to and for those who can’t submit to this fact. Don’t believe for one minute that The Good Car Guy would ever buy a Buick Enclave. I started writing about cars when the smart fortwo hit Canada. Polar opposites; the smart and Enclave? Not quite, but pretty close.

I wouldn’t be skipping the Enclave, however. I’d be skipping the whole class of vehicles. Large, upscale crossovers aren’t my thing and the absence of children in our life doesn’t seem to bode well for Buick salespeople who want an Enclave parked outside my door. I don’t need it, I don’t want it.

But I know the Enclave is good. A fellow blogger at GM’s Milford Proving Grounds just two days ago told me that he enjoyed driving the Saab 9-7X Aero a whole lot more, but the 9-7X Aero seemed pointless. And although he’d never have previously considered a Buick, this Wired Magazine correspondent’s father just bought an Enclave. Hmm? How’s that end up happening later in life?

The Enclave will never handle like that Swedish-American muscle SUV (did I already say pointless?) but it shouldn’t and won’t. The Enclave should possess true Buick characteristics and have a strong sense of desirability and some urban chicness. Nope, I’m not in the market for an upscale utility crossover, but I do know what a Buick needs to be and represent if I am ever to be tempted by any sort of Buick.

When I broke two wrists at once, the doctor asked me which news I wanted first; good or bad. Well, I asked for bad first. (There was no good.) Call me Dr. GoodCar and let me offer suggestions on treatment for Buick’s maladies. 1) Build more Enclave-like vehicles. Not crossover/utility/SUV type cars, but beautiful cars. The Lucerne and Allure/Lacrosse are not beautiful, and that actually hurts the Enclave. 2) Learn to make the vehicles as quiet as the Enclave while also putting them on a diet. Don’t lose the quiet, but lose some weight. You’re too fat, Buick. 3) Ignore loyal buyers. Sorry to sound harsh and uncouth, but the loyal Buick buyer has a life expectancy which ends….. next year. Don’t cater to him. A good car is a good car is a good car. If you make it good, old guys and gals’ll like’em, and so will I.

To the Enclave, more specifically we go. Prior to my Enclave drive, I was in a Pontiac Torrent GXP for about five miles. It’s worth reading about. Talk about two SUV’s with different priorities. Actually, don’t talk about it right now. Keep reading – I’m trying to hold your attention. The GXP is a performance edition of a somewhat boring vehicle. Enclave’s are an exciting new addition to a traditionally boring brand. Buick’s were once an aspirational purchase. When Cadillac’s were cool and became the obvious choice for a rich dude in Elvis Presley’s era, a Buick wasn’t just a respectable choice. These were respectable Cadillac alternatives. Give me an early 60’s Electra or a first generation Skylark, please.

Now Cadillac is fighting to be taken seriously as a worthy hi-lux player, and Buick is disregarded by a huge percentage of anybody born after 1950. Yikes. (Read about Enclave’s success here.)

Now the Enclave is an aspirational purchase. You would feel good owning this vehicle. You’d enjoy living with it and be, at least, comfortable driving it day-to-day. Enclave has all the luxury you’ll ever need (luxury = need?) plus the space your family requires. A luxed-up all-wheel drive Enclave does weigh a hair under 5000 pounds, though, and that’s a real down side after driving a Torrent GXP.

Granted, these two GM vehicles aren’t competing. (Read the Enclave’s 3 To Beat here.) The Enclave has to fight off Saturn’s Outlook and the GMC Acadia instead. The Torrent proved the performance SUV case, at least as far as driving dynamics go. Buick’s Enclave, on the other hand, is no fun to drive. 275 bhp sounds like a lot, but we’re talking about 5-0-0-0 pounds here, folks. No biggie, though. I don’t seek more power every day at home – I try to conserve. So, I’m not looking to worsen the 3.6L V6’s fuel economy ratings of 16/24 US mpg. Power will suffice.

Nonetheless, the power-to-weight deficit, when combined with a bit of pillowiness over yumps and the disconnected feel of the steering… well, then I begin to mind the dynamics of the vehicle. Then again (again), we’re intentionally driving aggressively and a Buick crossover isn’t going to – and shouldn’t – behave like a Saturn Sky. No, I want some pillow-like qualities. Ya know what; I don’t want to submit to a writhing steering wheel fighting to maintain the straight-ahead. I want my Enclave to wrap me in a warm cocoon at the end of a 9am-5pm day, serenade me with satellite radio, preserve me and protect me when necessary, and provide me with the space I need for my peoples and their things. Quickly. While looking goooood.

To meet those demands the Enclave gives you: tri-zone automatic climate control, power seats and a tilt and telescopic wheel; six speakers with speed-compensated volume and XM sat-radio; ABS, StabiliTrak, traction control, Xenons, side curtains for all three rows, cruise control, a 50,000mile bumper-to-bumper warranty and tire-pressure monitoring; seven seats; a capable V6 with a 6-speed automatic; 18 or 19-inch wheels and a really wicked front wheelarch. For proof of that just look at it this pic, edited to really show the wheel, arch, and curves. Taken at Milford by The Good Car Guy just two days ago. 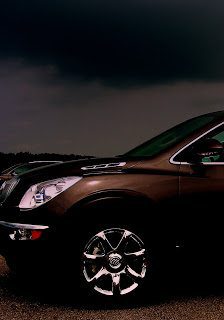