As one of the strongest competitors in the small-car segment, the debut of a second Mazda 3 is big news. In Canada, the Mazda 3 routinely comes closest to knocking the Honda Civic off its perch as the best-selling car in the country.

Now, we have a new Mazda 3. True, we haven’t yet seen pictures of the hatchback. It’s also true that this isn’t really the second 3. Long before Mazda changed up the nomenclature, the 323 and Protege and Protege5 held some appeal with consumers. But the 3 moved the game on; quite successfully.
(Click here for all Mazda-related posts on GoodCarBadCar)
Few would be surprised by Mazda’s decision to use design characteristics from the handsome new Mazda 6 on the new 3 sedan. Regardless of the dimensions, it looks longer; lower; and leaner. Expect a slightly-tinkered 2.0L to remain as the base engine in the North American markets. The base engine from the Mazda 6, a 2.5L with about 170 horsepower to be standard in a 3 hatchback or optional across the board.
The 3 is vital to Mazda’s success. With around 1.8 million sold, almost 1 in every 3 Mazdas that fall into the hands of consumers are Mazda 3s. 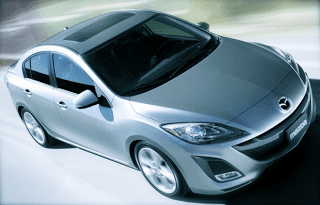