Sure, 400 bhp and 450 lb-ft of torque sounds sweet. Two turbochargers on a BMW V8 combining to generate the power? Tasty indeed. But BMW’s X6, with awkward model names like xDrive50i and xDrive35i (300bhp 3.0L twin-turbo six), must compete in-house before it even considers conquest sales. Could this be the German version of the Isuzu VehiCross, Suzuki X90, or Chevrolet Tahoe 2-door?

Reminiscent of Porsche’s scheme with the incredible Cayman, the X6 will battle the X5, 5-series wagons, and even the X3. In fact, the oddities of buyers who purchase a vehicle like this will be proven by their cross-shopping with other versions of the ‘newest and latest’. The Cayman is hardtop only, whereas the Boxster allows you to drop the top. The Cayman is a better performer, but not so much as to demand such a price increase. It mightn’t be as pretty, either.

The X6 poses similar issues. It’s an impractical, niche product that may be better than an X5 on the road, but not so much as to necessitate the purchase of an expensive and, dare I say it, ugly duckling. Yes, it’s true. From some angles, the X6 is stunning….ly awful. Not to say there won’t be interested parties. 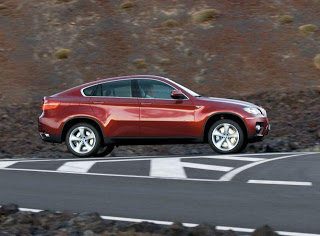 This BMW is the newest and latest thing, after all. And it happens to offer a V8 engine that could have federal environment ministers seeking new portfolios. Industry; or perhaps Public Works or Transport. Some place where gas guzzling is permitted. This 4.4L will want to play.

I wanted to hold my tongue. I tried. But the pictures of this dog are everywhere, and it was eating at my insides. Apologies to the designer.