Could it be that a truck will be punished by The Good Car Guy for being cheap? Of course, cheap has numerous definitions, one of which indicates something of little value or even devalued. See, Ford’s Ranger won a GoodCarBadCar.net Top 5 for being the cheapest truck in America. 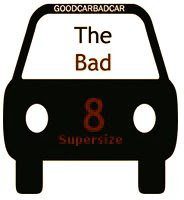 Now the Ranger is back in a place of prominence for, well… losing, and thus finding itself in The Bad 8 Supersize. One problem is that very thing, the fact that the Ford Ranger isn’t supersized. Even small trucks have to grow up these days. Lacking power is problematic, too. Being not-at-all-too-pretty hurts. But most of all, the Ranger’s downfall occurs because of refinement, the complete and total lack thereof. Drive a Ranger and discover (rather, try not to) noise, vibration, and harshness unlike any other new vehicle available in North America. Try to keep your head from hitting the roof after bumps and yumps.
Sure, Ranger owners paid next to nothing for the dishonour of owning the Ford. They received next to nothing in exchange, however.
—–
Alternatives: 6 MacBook Pros, an iPod Touch & a bus pass, Toyota Tacoma, Nissan Cube
Necessary Incentivizing To Switch To The Good 12 Supersize: Buy 1 Ranger, receive 60% off an F150
Anything Else? Don’t even attempt to suggest fuel savings make a Ranger purchase justifiable. If you want to save fuel and tote stuff around, any small wagon would save a lot more fuel.