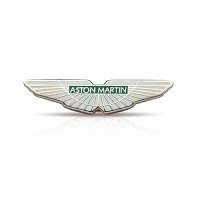 From an owner’s perspective, the five Aston Martins pictured in the Gallery below offer dramatically divergent driving characteristics. Sure, they’re all rear-wheel drive. Each comes standard with – or is available with – a V12 engine. Every new Aston Martin is ridiculously quick in comparison with anything this side of a Ferrari 458 Italia. After all, 420 horsepower is a starting point for the range. Indeed, all five Aston Martins are, to the pauper’s eye, astonishingly expensive. The “cheapest” model, an Aston Martin V8 Vantage, starts at $120,750 in the U.S.

But it must be pointed out once again, these five products of Aston Martin, thought up at the company’s Gaydon HQ, are truly very different cars.
Right?
You’ve got yourself the supercar, the Aston Martin One-77. Limited production, magnificent power, exotic construction. It’s all there. Move on down the ladder to the Aston Martin DBS. A lovely James Bond car if ever there was one, the DBS is a DB9 on steroids; a DB9 gone mental; a DB9 for the GT lover whose inner being yearns for a sports car. Recently, Gaydon HQ has added the Aston Martin Rapide, an upper-crust sedan competitor for the Porsche Panamera, direct competition for the Bentley Continental Flying Spur. Except it’s not really a sedan at all but a 5-door hatchback. Interesting. Finally, we have the splendid Aston Martin V8 Vantage, V12 Vantage, and DB9. Quite likely the most gorgeous Aston Martins, they’re also the oldest models on file.
Yes, so different and yet so similar. The Good Car Guy has complained about the lack of creativity in Aston Martin’s production cars before. It all sounds so irrational at first. Isn’t gorgeous enough? Why must each car stand out from the fleet? At that time, GoodCarBadCar.net displayed the front end of every Aston Martin, a photographic nightmare for each car, perhaps excepting the audacious One-77.
See, Aston Martin believes its stylists have got the proportions down. Hammer hitting nail on proverbial head, they might say. So, what’ve they gone and done? Absolutely nothing. Any time you’ve got this much obvious talent working for your company you’ve gotta let them run wild…. just a little bit?
Let’s use BMW as an example. For decades, BMW’s cars were conservatively handsome; uniquely BMW. There was the twin kidney grille, the Hofmeister kink, and rear-wheel drive proportions. It became increasingly clear, however, that every BMW was just an enlarged or shrunken facsimile of other BMWs. In 1998, for instance, a BMW coming your way could’ve been a 3-Series, 5-Series, or 7-Series and you’d never know the difference until it pulled up beside you on the sidewalk so you could gauge its largesse. BMW went haywire in its search for differentiation – a terrible 7-Series, a horrible 5-Series, a bad X3, and a lame 3-Series – but now that the firm is returning to sanity you’re able to see the method in their madness. Criticism was harsh but sales didn’t come close to declining. And now there’s model differentiation. We have the wonderful BMW Z4, a lovely new BMW 5-Series Touring, and surely more to come.
With all their obvious design talent, couldn’t Aston Martin differentiate without disheartening the believers? While it’s true that Aston Martin sales aren’t in decline; while the vast majority of auto enthusiasts (and non-enthusiasts) would agree on the beauty of Aston Martin automobiles; and while it matters far more what millionaires think than what you and I assume they think, Aston Martin still has a problem.
I’m bored.
I know what the next Aston Martin is going to look like. It’s going to look good. Probably really, really good. But I won’t care for long. Take one Aston Martin Vantage and enlarge. There you have the Aston Martin DB9. Now lower the DB9 and add a bodykit – that’s an Aston Martin DBS. Take the DB9 again and pull the bumpers just enough so a couple more doors will fit. Good, an Aston Martin Rapide. Start with a DBS but make everything more of an Aston Martin caricature. Voila, the Aston Martin One-77.
I’m bored. I’m put to sleep by the release of new Aston Martin images. Something’s gotta change.
Profile views of each Aston Martin are in the Gallery below.
Related From GoodCarBadCar.net
Do All Aston Martins Have To Look Alike? Rapide Gallery
Low Volume Automaker Sales In The USA – January 2010
Top 10 Most Expensive Sedans In The World
Aston Martin Rapide By The Numbers
Aston Martin DBS Volante Gallery