As pictures flow across the web today (see earlier Genesis Coupe post here), opinions are varied. Rightfully so; for the rear-wheel drive sporting coupe from the upstart Korean automaker, a potential competitor for the oh-so-American Ford Mustang and oh-so-Japanese Nissan 350Z, is varied itself.

It is very common for cars to be colour sensitive, especially vehicles with extreme angles or unique proportions. Then again, it is common for consumers to have completely different reactions to a vehicle depending on the setting they’re in (auto show, dealer showroom, magazine, highway fly-by) and the angle at which the vehicle was noticed.  For instance, Infiniti became the lifelong automotive love of The Good Car Girl when she noticed the hind end of a G35 coupe not long after its introduction; following it for some time on the Trans-Canada Highway. Nothing could’ve changed the passionate reaction she had to that car and its ilk. (See the FX35 Memoriam here.)
So, back to the GenCoupe.  Looks do matter.  Otherwise, designers wouldn’t… er, design.  Stylists would style. And marketing mavens wouldn’t attempt to convince you that, “yes; the windshield rake on that minivan does lend itself to Aston Martin comparisons”. In fact, looks matter a whole lot more when it comes to two-door vehicles which have the sole purpose of looking better than their sedan equivalent. Without style, there’d be next to no reason to choose a BMW 3-series coupe over the sedan.
Yet, the Hyundai Genesis Coupe isn’t exactly what the concept led us to believe.  Troublingly, the GenCoupe divides an individual’s own opinion.  Do I like it?  Or do I not?  The Genesis Coupe will likely be quite a stormer, with 300 horsepower, decent traction, and a quick-shifting gearbox.  It may not be an all-out sportscar, but a budget GT.  Contrast the GenCoupe with the Porsche Cayman in the same way a Maserati GranTurismo would differentiate itself from the Ferrari F430.
That doesn’t answer the all-important coupe question.  Fast; yes. But a looker?  Here are five angles of the Hyundai Genesis Coupe. Feel your way from the first shot (poor) through to questionable, decent, good, and very good. 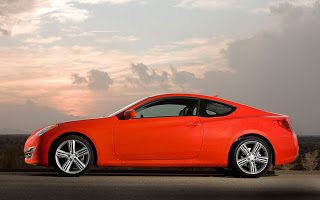 Disagree with the order, or with the premise altogether?