ACROSS THE POND – SKODA

Europe has in its repertoire a whole host of weaponry that the new world of North America will never lay claim to. Tourists flock to Europe’s historic cities. Sports fans are catered to by massive crowds at football games. Scientists walk on land which featured a huge population many hundreds of years prior to the

Viking discovery of North America. Politicos can cross border after border of nations with drastically different governmental organization and theory – all within a day.

For the auto enthusiast, Europe lays claim to a multiplicity of automobile manufacturers that have either never officially campaigned on our side of the Atlantic, or haven’t done so in years. We suggest it was their failing reliability or implicit desire to be unique in a more conservative marketplace that forced their departure.

Whatever it was; our collective wish is often different now. Rather then, “Go home”, we shout, “Come on over”. In most cases, it doesn’t appear to be working.

Skoda, a Czech make which has been under Volkswagen’s hold since 1991, sells four cars in English-speaking Europe. (GCBC’s unilingual status precludes us from discerning the activities of this week’s feature companies in countries such as Andorra and Bosnia.) Ironically, Skoda’s origins date to 1894 when its founder, Vaclav Klement, sought out the parts to repair his German-made bicycle. The Germans responded to his Czech-written letter with a German-written letter saying this: “If you would like an answer to your inquiry, you should try writing in a language we can understand.”

From this, Klement began to repair and then build bicycles; then motorcycles, and then cars. Skoda now competes in the World Rally Championship and builds cars in a fair number of countries including Bosnia & Herzegovina and India. Skoda built over 550,000 vehicles in 2006. 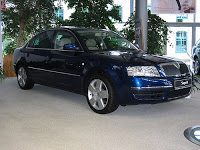 Skoda names its stretched, subtly rebodied, previous-generation Volkswagen Passat the Superb. The backseat is absolutely capacious and luxurious features abound. The car is better looking than the last Passat ever was, thanks mostly to more appropriate proportions. The uppermost trim level is named Laurin & Klement, in honour of the founders of the company that eventually became Skoda. Equipping the Superb with VW’s older 2.8L VR6 and an uplevel trim would give you a similarly priced car to Volkswagen’s own GTI. 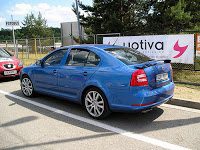 y on top of all the hardware. Underneath this Skoda lies the architecture of the current Golf, and on top lies similarly conservative sheetmetal. Similarly conservative, but not similar. Skoda’s have not been known for stepping up to the plate with home-run styling, and it is only in this concern that the Octavia falters. The Octavia vRS is a seriously competitive performance edition, featuring much of VW’s GTI performance paraphernalia in wagon or 5-door hatch formats. You’ll pay substantially more for a true GTI, however. Up to £2000 more.

Fabia is the name of Skoda’s sub-Octavia lineup. The newest Fabia has crossed over from the field of boring styling to hip and funky. Painted orange with a white roof….. mmmm, it looks good. Skoda starts the bidding for the Fabia about £3000 lower than for the Octavia, which rings in around £11,000. The Fabia is very much a Volkswagen Polo which itself is sized very close to the second generation Golf. A variety of diesel and gas engines are available on the new Fabia, with a likely hi-po diesel in the upcoming vRS. Horsepower sits between 60 and 105 for now. 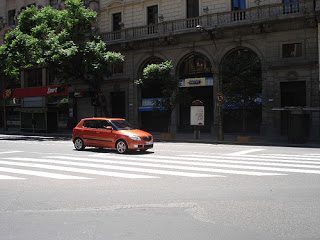 Skoda’s coolest car may well be the Roomster. One of Europe’s fastest growing segments is the small people-carrier. Where we are offered the Mazda5 and Kia Rondo, Europe prefers to skip over big MPV’s like the Honda Odyssey or Toyota Sienna and buy Mazda5-like vehicles. The Roomster is a small-on-the-outside big-on-the-inside vehicle, capable of holding a normal sized family and their luggage. Many vehicles of this type have been odd ducks and shamed members of the family – cars like the Citroen Berlingo and Renault Kangoo. Skoda sees the Roomster as a competitor to the Honda FR-V and Renault Scenic. Traditional Skoda pricing positions the Roomster as a high-value item. Plenty of space in a package that fits between the Fabia and Octavia. Like the Octavia, the Roomster supplies a ‘Scout’ version – very much in the mold of the Volvo Cross Country or Subaru Outback line of thinking. 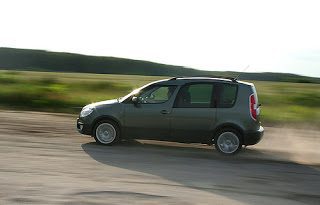 The Roomster is a striking vehicle in a category full of frumpy but fun-to-drive people haulers. Skoda’s Fabia finally offers stand-out looks in one of the most active sectors in all of Europe. The Octavia is a traditionally sized family car. Too traditional? Or just a wickedly sweet Q-ship? The Superb can’t compete forever on last decade’s technology. But it does show Skoda’s honesty as a producer of cars for the people. Take it or leave it – Skoda keeps you comfortable and safe and proves you to be a contemplative car buyer.

—
GoodCarBadCar Auto Olympics pickup where they left off real soon. One semifinal and the two medal matches remain. The next ‘Across the Pond’ will feature Renault.