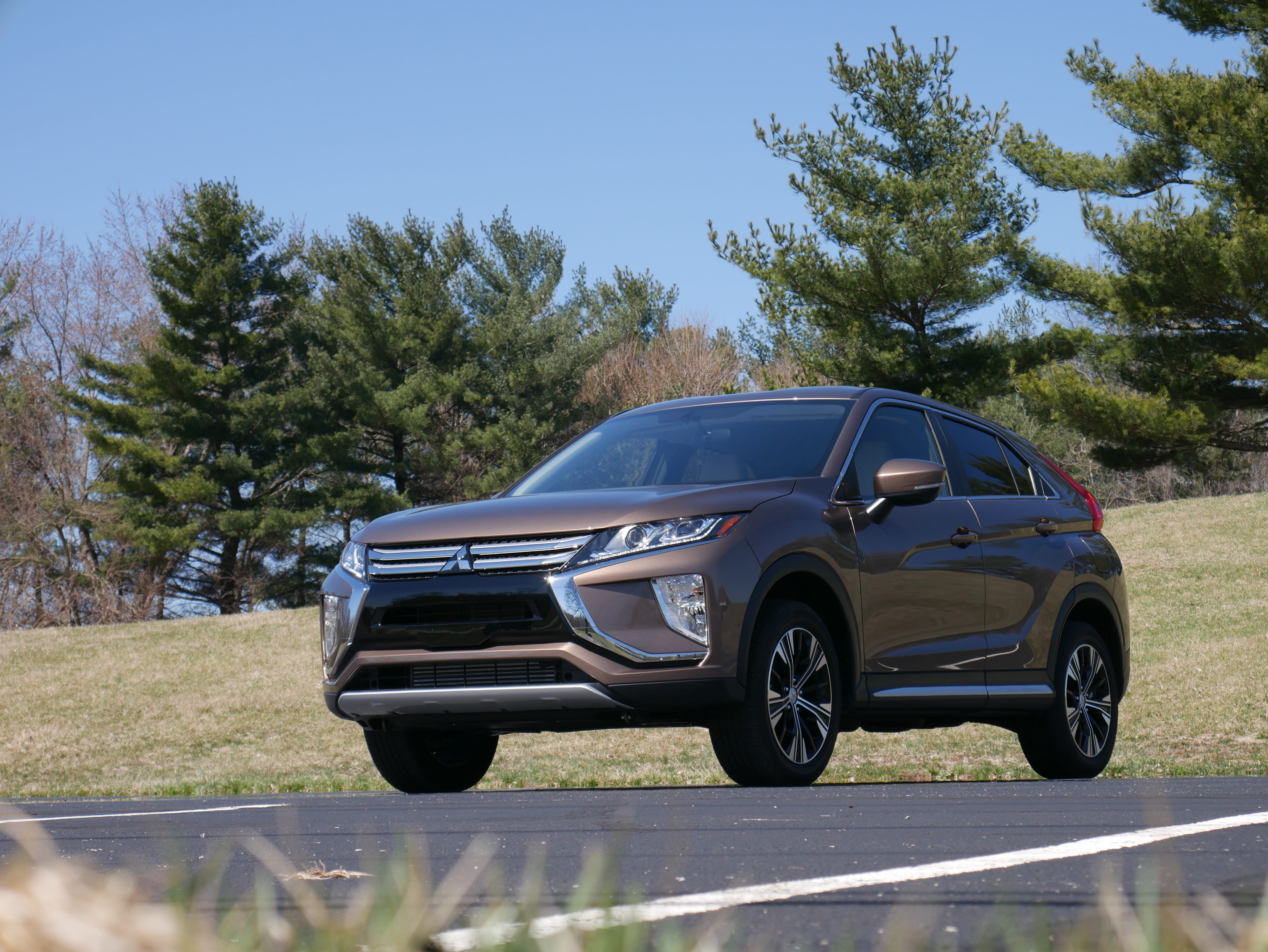 The Eclipse Cross is Mitsubishi’s effort to reinvigorate the brand with a new vehicle in a popular segment.

The company revived the Eclipse name and added the word “cross” to drive home the fact that it’s a crossover—as if you couldn’t tell from just looking at the thing!

The Eclipse Cross is a valiant effort from a brand of shrinking importance to stay relevant in an ever-changing North American automotive environment.

The vehicle’s downsides are both a product of the overall industry itself and Mitsubishi’s approach to it. The end result is a competent crossover that’s doesn’t stand out from the competition in any way.

The last thing the world needs right now is another subcompact SUV or crossover that’s completely uninspiring, and that’s exactly what Mitsubishi gave the market. The model hit showrooms last year, and it hasn’t changed much for 2019.

While it won’t completely change Mitsubishi as a company, a competent small crossover like the Eclipse Cross could move the needle in the right direction even if it’s not going to reinvigorate the brand in a big way like the company hoped.

Mitsubishi claims the Eclipse Cross embodies the same affordable, sporty experience that came in the coupe that first wore the Eclipse name. I don’t think so.

The styling of the crossover is modern and builds on what the Mitsubishi Outlander and Outlander Sport have already started.

It’s an aggressive and uniquely styled crossover, specifically at the rear, which features a horizontally split rear window and cool looking taillights with a light bar stretching across the rear hatch. Its styling may be its high point.

Too Simple of an Interior

The interior is modernly styled with a clean design, but it’s a little too boring for something that’s this expressive on the outside. The interior still has some of the cheapness to it that its competitors lack.

There’s too much cheap-looking plastic on the center console and dash. Mazda and Honda’s vehicles put the Mitsubishi to shame. Having said that, it’s a major step up from many of Mitsubishi’s other vehicles.

When it comes to technology. Mitsubishi placed the optional 7-inch touchscreen right on top of the dash in plain view. It’s a decent system, with plenty of good features like Apple CarPlay and Android Auto, but it lacks the smoothness of other systems out there and screen resolution could be much better.

The touchpad infotainment controller is also decent, but not anything special. It requires too much attention to be easily operated while driving. Having said that, I actually found it easier to use than the touchpad system in the Lexus LS 500 I drove. There’s just a lot less to Mitsubishi’s system, and it was easier to navigate.

There are buttons to either side of the screen as well. While this helps alleviate some of the reliance on the touchpad, they are also touch-based buttons and not physical buttons. There’s no tactile feel, and it can be hard to hit them on the fly.

Mitsubishi obviously learned nothing from Honda’s mistakes, because it left out a good, old-fashioned volume knob. It ed some touch buttons to the far side of the screen. Not only are they hard to reach, but they’re difficult to use.

Honda has moved back to a volume knob, and Mitsubishi should think of using one in future versions of the Eclipse Cross.

All but the lowest trim level of the Eclipse Cross come with Mitsubishi’s Super All Wheel Control as standard equipment, which is actually quite good. It’s a high point of any of the company’s vehicles.

The Eclipse Cross is not a huge vehicle. Think small hatchback car but on some stilts for that crossover look and good visibility everyone seems ready to pay for.

I’d compare it to other subcompacts, but many people will lump it in with compact crossovers like the Honda CR-V and Toyota RAV4.

Adequate But Not Great Legroom

Forgetting what segment it really falls into for a second, Eclipse Cross’ front seats offer plenty of room and the rear ones provide a decent enough space. I could sit in the rear seats comfortably with the front driver seat adjusted for my driving position.

That said, I’m not a huge guy at five feet eight inches. A couple of six-footers would be much tighter, especially in the rear seat.

In terms of the actual numbers, the Honda HR-V has more front and rear legroom, but only slightly. The Hyundai Kona offers more front legroom but less rear legroom. The story is similar for others in the subcompact segment.

Other subcompact crossovers, like the Toyota C-HR, Mazda CX-3, and Chevrolet Trax offer about the same as the Kona or less, so you could say the Eclipse does a decent job here.

Splitting the Difference Between Segments?

What’s interesting about the Eclipse Cross is that I would place it with the models I just mentioned in terms of size, but it’s right on the cusp of competing with vehicles like the Honda CR-V, Toyota RAV4, and Mazda CX-5.

Those models have larger exteriors and bigger interior than the Eclipse Cross.

The Mitsubishi Eclipse Cross does its job, however, it’s not the what the company would have you believe. It’s not a spiritual successor to its previous sporty coupe in crossover form. It’s a crossover built for people who value style and comfort over driving dynamics.

In short, it looks good, is comfortable, and handles well enough for most everyday duties. It is not a performance vehicle or even an everyday crossover with some sporty inclinations. It’s most comfortable in traffic and in urban or suburban environments. It can zip from light to light with ease and cruise around a subdivision comfortably.

You can navigate the roads that most people will encounter easily, and even if you do find some slick roads or a difficult gravel track, the all-wheel-drive control is dummy-proof. You push it once and it goes into the next setting.

You can cycle through different settings depending on the type of terrain you see, whether it be rain, snow, or gravel. It also has the goods to get the job done reasonably efficiently on the highway. All in all, it’s a good vehicle, just not a special vehicle.

Is It Worth It?

Although Mitsubishi upped its game with the Eclipse Cross, I can think of several other crossovers I’d rather have for the money or just a little more. I’d turn to the Honda HR-V or the Hyundai Kona first. Their infotainment systems are better, egonomics better, and driving dynamics excellent.

If driving is truly important to you, look to the Mazda CX-3 which makes other crossovers and many cars feel horrendous when it comes to handling and driving dynamics. The Eclipse Cross simply can’t compete with the segment leaders. However, it can outpace vehicles like the Toyota C-HR, Chevrolet Trax and Fiat 500X.

When you compare the Eclipse Cross on price, things get interesting. The vehicle is actually more expensive than the Hyundai Kona, Honda HR-V, Mazda CX-3, Toyota C-HR, and Fiat 500X.

If you jump up to the compact crossover segment, it’s more affordable than the Toyota RAV4, Honda CR-V, Mazda CX-5, and Ford Escape. It’s only a thousand dollars or less in most instances, but it is more affordable.

This was without a doubt on purpose. As I mentioned above, by placing the Eclipse Cross here, Mitsubishi is able to tap into a customer base that’s between the subcompact and compact crossover segments. It can capture sales from those people who need a little more car than a subcompact offers but don’t want to go for the larger size and price tag of a compact crossover.

Should I Buy Something Else?

I would. The Eclipse Cross is the best Mitsubishi vehicle on sale today. If you want a Mitsubishi this is the model to buy. However, I’d bite the bullet and buy a slightly more expensive Honda CR-V, Mazda CX-5, or Toyota RAV4.

In those vehicles, you more space, better driving dynamics, a more comfortable interior, and an infotainment system with a real volume knob and no touchpad controller.

The Eclipse Cross is so close in price (it starts at $23,595) that it would make sense to pony up for the better vehicle in the long term.

In the case of the Honda CR-V and Mazda CX-5, you’re only going to spend $755 more when comparing base models. That’s not a lot of money, and once it’s spread out over the course of the loan or lease you won’t even notice it.

What you would notice if you bought the Eclipse Cross is the fact that there’s just not quite enough room in it, and you wouldn’t be able to forget that for less than a thousand dollars more you could have gotten a bigger vehicle with better technology and superior interior materials.

Other vehicles that it competes with have singular attributes that stand out. For instance, Mazda’s crossovers are the best to drive, Honda’s are the most impressively packaged, and Toyota’s are typically the most reliable and highest quality at their price point.

Those are wide generalizations, but they’ve proved to be true in the vehicles I’ve tested. I can point to no one thing in the Mitsubishi Eclipse Cross that really stands out, and in a vehicle that brings back a name people know and remember, that’s a problem.

Note: Mitsubishi provided the test car for the purposes of this review.