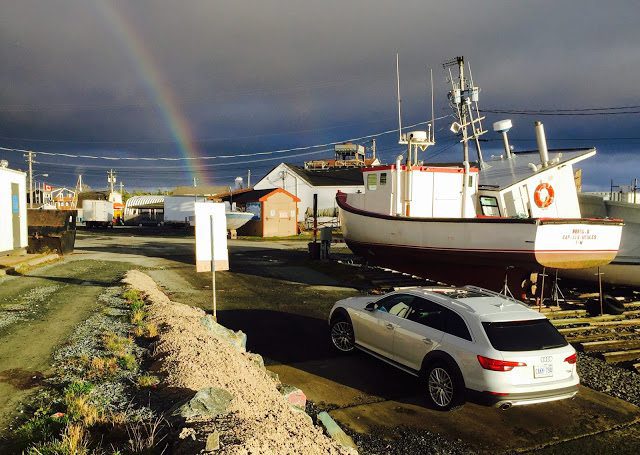 GM’s now defunct Pontiac brand became synonymous with lower bodyside cladding. By the time product guru Bob Lutz smoothed out the sides of Pontiacs, the brand was ready to give up the ghost.

But not all cladding is ribbed, body colour stuff like the plastic General Motors slathered across Grand Ams and Grand Prixs and numerous other cars.

Designers also affix extra plastic to vehicles in order to toughen up the exterior appearance.

Wrap the wheelarches. Run many feet of black cladding along the bottom of the doors.

The goal is to make the lower portions of both bumpers so matte there’ll be no mistaking the rugged mission of your Jeep, or your Land Cruiser, or your G-Wagen.

Or your European luxury station wagon.

The ride height of Audi’s second-generation A4 Allroad is only 23 millimetres higher than the Audi A4 Avant on which it’s based; ground clearance is up by 34 millimetres to only 165 millimetres. This is not a high-riding SUV. The 2017 Audi A4 Allroad does not even remotely offer a commanding view of the road ahead.

WHAT IS IT?
The 2017 Audi A4 sedan is the fifth in a line of compact Audis dating back to 1995. Linked to those A4s have always been wagons, or Avants in Audi parlance. 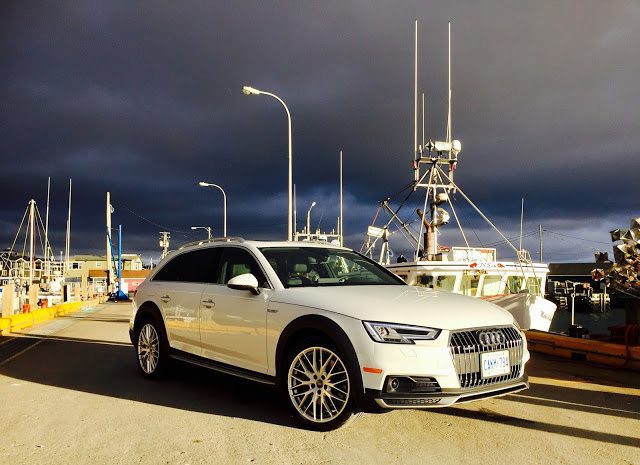 Up a notch in size and price, Audi’s second-generation A6 Avant was transformed into an Allroad with an adjustable suspension and SUV styling cues to create a premium alternative to the Subaru Outback that had arrived half-a-decade earlier.

Audi no longer offers that car, nor do they sell an A6 Avant, in North America. But Audi brought the Allroad formula to the fourth-generation A4 in the summer of 2012, killing off the A4 Avant in the process (in North America.)

HOW BIG IS IT?
It’s a wagon, but that doesn’t mean it’s your grandfather’s 1982 Ford Country Squire.

Audi’s own Q5 crossover, by no means as spacious as its exterior dimensions suggest, offers 10% more passenger volume and 20% more cargo volume behind the rear seats than the 2017 Audi A4 Allroad.

But compared with the Audi A4 sedan, the Allroad’s cargo area is not only more flexible in shape, it’s 86% larger. The Allroad is nearly an inch longer than the sedan, bumper to bumper, and requires 2.6 inches of additional clearance at the roof.

DOES IT WORK?
It was only a few weeks ago that we reviewed the slightly lower, slightly lighter, more aggressively tired, 2017 Audi A4 sedan. The sedan is essentially this Allroad, only lower and lighter and with stickier rubber and a trunk. You can, therefore, read the words from this same section in the A4 sedan’s review, and subtract a fragment of edginess from its handling, enhance its ride quality by a pinch, and add more cargo volume. Otherwise, the Does It Work? response from that review fits here.

“On a ten-minute test drive with a sales consultant yammering away in your ear, it’s easy to be impressed by the new A4’s off-the-line pull, the material quality and assembly, and the new car’s reduced noise, vibration, and harshness. But it’s more difficult to take note of a car’s niggling issues, the minor flaws that you’ll regret regret not noticing when you signed on the dotted line.

That’s where car reviewers come in, or at least where they should come in. I spent a week driving the 2017 Audi A4, and I can (and will) discuss at length its winning characteristics. But Audi can do that, too. So can your local Audi dealer’s sales consultant. In fact, since you are interested in the car, you can likely do so, too. Positivity is the easy part: it’s 2016, cars are nice. Expensive cars are especially nice.

But you won’t possibly think highly of the 2017 Audi A4’s shifter, which possesses no real detents and needs to be thumbed into park via a separate button. Parallel parking in three or five points seemed to always result in the car being in neutral rather than reverse. In the long run, it’s minor, and you’ll get used to it. Maybe.

The new A4 also does an exceptional job of silencing wind and road noise, but that opens up an avenue for engine clatter, diesely engine clatter, to make its way into the cabin. Rarely does the 2.0T sound pleasant. The engine noise is by no means alarming or obnoxious, but you will notice this minor fault in Audi’s NVH work.

The rear seat’s centre hump is massive, and for such a lengthy car, the rear seat lacks real space overall, a common complaint in this class. The trunk is vast and properly shaped, however, so you won’t have trouble taking four people and their stuff on a trip. But five?

With Audi Drive Select in Comfort mode and the transmission in D, the dual-clutch automatic is reluctant to provide much in the way of throttle response from rest. Perched on a slope, perpendicular to traffic, betwixt corners on a high-speed road? You better goose the throttle, because a quarter-inch of travel gets you nothing otherwise. Or change the drive modes.

Everything about Audi’s MMI is user-friendly, enough to negate the need for a plug-in-only and rather limited Apple CarPlay. (CarPlay is great, but it’s not all things to all people all the time.) But why does the volume knob, conveniently located on the centre console, have to be so far away from the MMI controller, aft even of the shifter? It’s an awkward arm bend away.

These are the kinds of “faults” that jump out during a week with the 2017 Audi A4 Quattro 2.0T precisely because the car is so composed, so comfortable, so technologically advanced, so refined, quick, and quiet.

Not historically considered a dynamic tour de force, the new A4 both rides and handles better than before. It’s still not a feelsome and interactive machine, but the 2017 A4 is a more competent corner carver while, at the same time, able to traverse rough pavement with greater alacrity. Brake feel is much improved, steering weight and directness (in comfort mode) is more natural, and the 252-horsepower 2.0L turbocharged four-cylinder provides loads of mid-range punch, helped along by a dual-clutch that can snap off downshifts in a flash.

Cabin comfort is better, too, particularly with our car’s sport seats. The bolstering isn’t what you’ll find in an RS model, but the seats nicely blend comfort with stability.

We expect high levels of build quality in Audis, and the A4 is certainly no slouch. It’s in the way the steering wheel stalks move, the climate control knobs twirl, and the cross cabin vents slide. The workmanship befits the lofty price point.

The pervasive sense of quality won’t win headlines. That’s where Audi’s customizable virtual cockpit steps in. Besides all the safety gear we’ve come to expect in heavily-optioned luxury cars, Google Earth in the middle of your gauge cluster is the item that will most impress your friends. Not only is the system attractive to look at, it’s quick to transition between modes, just like the centre screen above the dash. That centre screen doesn’t tuck away, mind you, but it feels and looks much more expensive than the unit in Mercedes-Benz’s C-Class.”

IS ANYONE BUYING IT?
Audi’s Canada A4 sales figures don’t separate the A4 sedan from the Allroad. We know that overall, A4 sales are on the rise thanks to the newness of the car and despite a general downturn in passenger car sales.

In the United States, the first Audi A4 Allroad proved to be a rarity, with Audi’s own Q5 outselling the Allroad by approximately ten-to-one. With the new car only just reaching dealers and only just beginning to benefit from this marketing campaign, Allroad sales increased in September and October after 21 consecutive months of decline. But even in October, Americans were 12 times more likely to purchase or lease an A4 sedan. 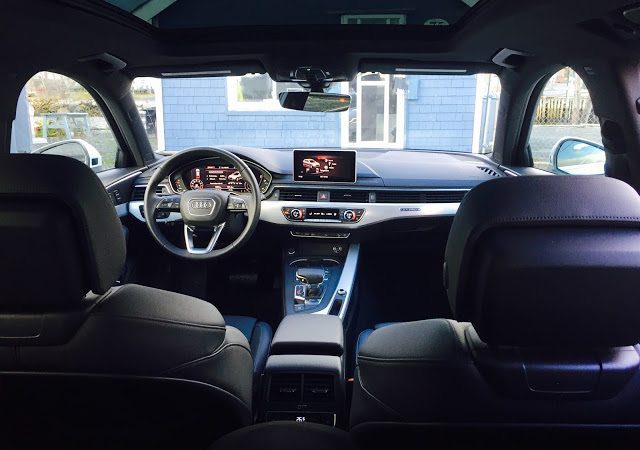 SHOULD I BUY SOMETHING ELSE INSTEAD?
Consider three options, only one of which lines up directly against the A4 Allroad because most other premium brands don’t market an elevated, SUVified, compact wagon in North America.

The Subaru Outback 3.6R Premium with a technology package costs $43,370. It’s not remotely as fun to drive nor as prestigious as the A4 Allroad, but it’s very refined and way bigger inside.

Without the Allroad’s added ride height – not noticeable in real-world driving anyway – the BMW 328d xDrive Touring is a diesel-powered wagon that starts at $51,945. It’ll feel comparatively chintzy inside and won’t be as driver-centric as you think BMWs ought to be. But, man, it’s cool.

The Volvo V60 Cross Country starts at $47,315, undercutting the A4 Allroad by $2380. Arguably, the Volvo looks better, as well. Don’t mistake modern Volvo wagons with the boxy car your uncle, the college professor, drove in the early 90s. But the V60 Cross Country does offer 16% more cargo volume than the Audi A4 Allroad.

And then there’s the obvious option. Set to be launched as an all-new second-generation model soon, the Audi Q5 is Canada’s top-selling premium brand utility vehicle. The Q5 is priced right, looks the business, and actually allows its occupants to feel like they’re sitting up a little higher. You could get the hi-po SQ5 ($60,695) for less than the cost of our heavily optioned A4 Allroad tester.

HOW MUCH SHOULD I PAY?
Presumably, what you want is a luxurious wagon. There aren’t many choices. But pumped up with the higher Technik trim level and a further $6910 in options, the Allroad starts to approach the territory of the larger Mercedes-Benz E-Class wagon.

We don’t always promote the complete and utter avoidance of options, but in the case of the basic 2017 Audi A4 Allroad Komfort, the car still looks terrific, it’s still handsomely equipped, and it’s still fitted with this $64,405 A4 Allroad Technik’s excellent powertrain. Except it costs $14,710 less.

WHAT’S THE VERDICT?
Admit it. You thought the idea of a sport-utility wagon seemed silly when Subaru first brought the Outback to market in the mid-90s. Now, the Outback is just a normal part of automotive society, and you get it: the Subaru offers genuine SUV ride height, a genuine all-wheel-drive system, and a rugged image fought for over the course of two decades.

The 2017 Audi A4 Allroad is, by comparison, a little lacking in sensibility. Audi increased the ride height so negligibly that you don’t notice its benefits in traffic – when looking up at the minivan driver beside you – or in terms of lost handling prowess when caning the wagon on your favourite rural road. So why did they bother?

No, seriously. Why? Crossovers are fine. Canadians are buying far more SUVs/crossovers than cars now. But the Allroad, at best, only barely crosses over from the A4’s domain into the Q5’s territory.

Why do we need all the cladding, why is the ride height increased at all? Presumably, because the Audi A4 Avant that still exists in other markets simply wouldn’t pass muster in North America.

Thankfully, for those who can accept the pretentious SUV cues, the 2017 Audi A4 Allroad is an objectively great car irrespective of our product positioning opinions. We said two months ago that all of the Audi A4 sedan’s rivals, “do something better than the new Audi A4. None of them do so many things so well.”

Timothy Cain is the founder of GoodCarBadCar.net, which obsesses over the free and frequent publication of U.S. and Canadian auto sales figures. Follow on Twitter @goodcarbadcar and on Facebook. The Allroad was supplied by Audi Canada’s press office.