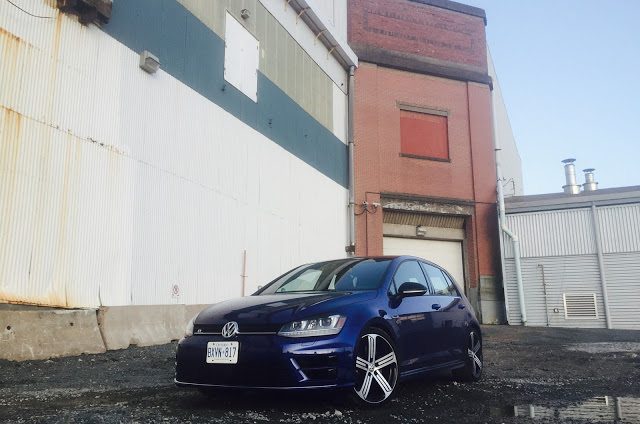 But the $11,400 spread is hugely misleading. To begin with, that GTI base price refers to the 3-door model – the Golf R is 5-door only. The Golf R is only $6000 more than the least expensive 5-door Golf GTI.

Then factor in the addition of all-wheel-drive – standard on the Golf R; not available on the Golf GTI. Traditionally, on models where all-wheel-drive was a standalone option, Volkswagen Canada has charged $2300. Factor that into the difference of these two cars and the margin is skimmed to $3700.

Then consider the equipment differences. To get a Golf GTI 5-door with Golf R-like kit, you’d need to step up to the 220-horsepower Performance model which costs only $1900 less than the basic Golf R, and that’s before the R’s $2300 all-wheel-drive system is factored in.

They won’t be equipped identically – Volkswagen offers features on the GTI that aren’t available on the R, and vice versa. But it’s fair to say that the R, especially with its rarity and superior resale value, is far more than just a $40K GTI with 82 extra ponies.

The 2016 Volkswagen Golf R is a whole ‘nuther beast.

WHAT IS IT?
40 years ago, Volkswagen began selling GTI versions of its Golf small car. In North America, the Rabbit GTI arrived about three years later. 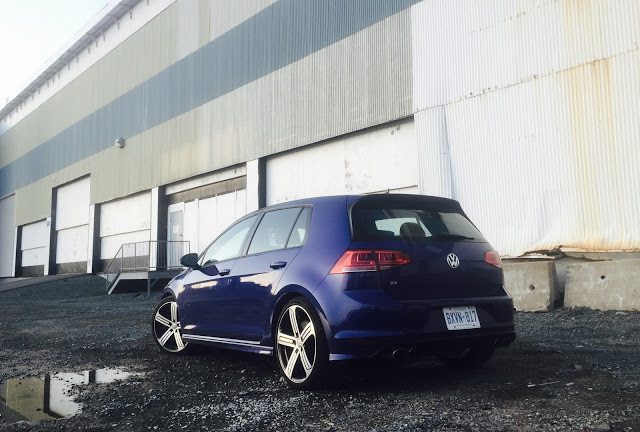 The idea of a higher-performance, more luxurious, all-wheel-drive Golf wasn’t fully realized until the end of the fourth-generation Golf’s Golf R32 run.

A 3.2L V6 engine and all-wheel-drive didn’t help the Mk4 Golf R32’s weight problem. Yet the first R, equipped in North America with a 6-speed manual transmission and only available with two doors, remains a highly respected car.

The Mk5 Golf R32 ditched the manual transmission for a direct-shift gearbox but was again a two-door car in North America.

The Mk6 Golf R, reviewed by GCBC three years ago, lost the numerals in its name, gained the option of two extra rear doors, and lost two cylinders. A 2.0L turbocharged four-cylinder was more powerful than the old V6, and Volkswagen ditched the DSG in favour of a 6-speed manual.

Now we’re in the seventh-generation of Volkswagen’s venerable Golf line, and the R will enjoy a longer run during the Mk7’s tenure as a four-door model only.

All-wheel-drive is still standard. This time, you can stick with the 6-speed manual or spend an extra $1400 on a two-pedal DSG.

In Canada, the Golf R is available in six colours, two of which are white, and one of which (Onyx White Pearl) costs extra. The lone option is a $2015 Technology Package.

Delivered to GCBC Towers by Volkswagen Canada in mid-May, our 2016 Volkswagen Golf R was equipped with the Technology Package, the standard 6-speed manual, and Lapiz Blue paint. 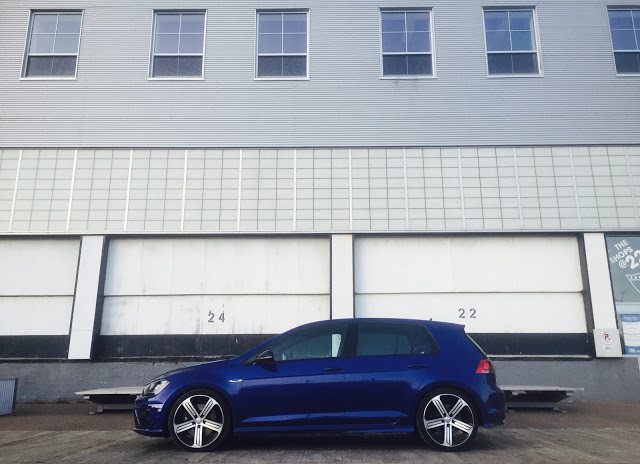 HOW BIG IS IT?
The 2016 Volkswagen Golf R is every inch a Golf, which means the R is three inches shorter, bumper to bumper, than the Ford Focus hatchback and 14 inches shorter than the sedan version of Honda’s tenth-generation Civic, Canada’s best-selling car. The Golf offers more passenger volume than the Focus hatch; less than the Civic. The Golf R’s 645-litre cargo area is deeper than you think it’ll be – extra rear legroom at the expense of some cargo capacity wouldn’t go amiss.

Weighing in at 3305 pounds, the Golf R is 267 pounds heavier than the Golf GTI we tested late in 2014. The R is also about an inch lower than regular Golfs and about a centimetre lower than the GTI.

‘;
document.getElementById(“vinads_div”).innerHTML = lfAd;
}
});
DOES IT WORK?
The fourth iteration of Volkswagen’s high-performance Golf R isn’t faultless. The short-throw shift action can feel a little crude at first. Rear seat legroom isn’t up to the standard of what a future Honda Civic Type R buyer will encounter. Owners of the Audi S3, this Golf R’s fraternal twin, enjoy Audi’s superior MMI system, not Volkswagen’s clunkier infotainment unit. At this price point, you may also expect features like a sunroof and a power passenger seat. Too bad.

And in a world of Ford Focus RS drift modes and the Subaru WRX STI’s Sport Sharp setting, the Golf R can feel positively chock full of decorum. If the Focus RS is the automotive equivalent of running with the bulls in Pamplona and the STI equals swinging from Moab’s Corona Arch, the Golf R is white clothes at Wimbledon.

But strawberries and cream are very delicious, indeed. And when your years of running with bulls and swinging between giant rocks are over, the Golf R provides nearly as much performance with far less noise, vibration, harshness, stiffness, and boy racer addenda.

The EA888 2.0L turbocharged four-cylinder (292 horsepower, 280 lb-ft of torque) is at the centre of the proceedings. Though the DSG in Audi’s identically-engined S3 (and in some Golf Rs) may produce the quicker car on track and on the spec sheet, the dual-clutch transmission displays a measure of lag in real-world driving which, as it turns out, highlights the responsiveness of the 2.0L turbo when married to this Golf R’s manual transmission.

Any gear works at any time. Second focuses your mind, and your right foot, on the 2.0L’s prodigious torque. Third is hugely flexible. Fourth would suffice as the Golf R’s only gear if need be, pulling from low rpm with gusto while quickly pulling you into illegal territory with ease. If you think the GTI is quick, you’ll be amazed by the Golf R, the way turbo lag is minimized and brief prods of the accelerator result in moments of alarming takeoff, a trait the GTI never displays.

Speed can’t be the Golf R’s only goal in life, however. Greater performance is available for less money, whether it be in the form of the Ford Mustang GT or the Nissan 370Z. The Mk7 Golf R is measurably and obviously quicker than the Mk6 Golf R we drove three years ago, but it’s also lighter on its toes, more anxious to turn in, swifter to respond to abrupt driver inputs, and more comfortable while doing so.

The Mk7 Golf’s sturdy structure permitted Volkswagen’s suspension developers to create a decidedly agile car that still knows how to cope with potholes, frost heaves, and expansion joints. Or at least a car that can cope with such rough roads, if the dampers are left in Comfort mode.

Volkswagen’s Mode selector sits to the left of the shifter and shuffles between Comfort, Normal, and Race. But it’s the final press of the button that reveals Individual. Now press “Adjust” in the top right of the touchscreen and leave the sound, lighting, adaptive cruise, and engine in their raciest Sport settings, but switch ride quality to Comfort and the steering to its lightest Comfort mode, too.

Heavier steering does not bring feel into the Golf R’s equation, and the Golf R’s cornering ability is more than sufficient in Comfort mode in 95% of on-road situations.

Now you’re driving a faster and more luxurious GTI that handles like a sharper GTI, a Golf that copes better with winter than a front-wheel-drive GTI, and displays all the refinement and comfort of a conventional Golf.

Oh, and the R has all the practicality and flexibility of a regular Golf, too. Practicality, flexibility? The Golf R is evidently not a Mustang or 370Z. 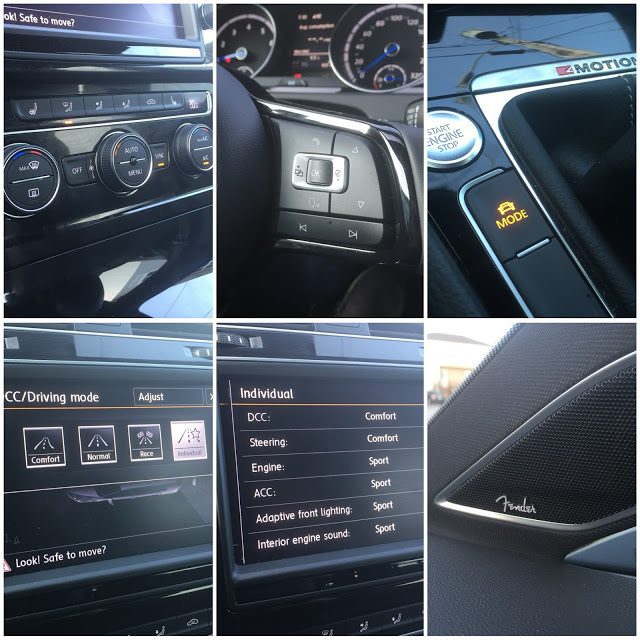 IS ANYONE BUYING IT?
Volkswagen Canada doesn’t break down Golf sales figures by trim line, though we do know that the GTI accounts for 12% of total Golf volume.

That’s a much lower figure than the GTI achieves in the United States, where the overall Golf line is far less popular than it is in Canada. Of the 17,241 Golfs sold in America in the first four months of 2016, 41% were GTIs, another 11% were Golf Rs. That’s 8936 total performance Golf sales so far this year. For perspective, Subaru reported 9974 WRX and STI sales in the U.S. in the first-third of 2016.

SHOULD I BUY SOMETHING ELSE INSTEAD?
There are certainly a handful of hugely intriguing possibilities when it comes to practical performance at the Golf R’s $41,700-$45,115 price point. The most obvious competitors are the more ostentatious, more performance-oriented Ford Focus RS and Subaru WRX STI, both of which feature all-wheel-drive just like the Golf R. Pricing for the Subaru starts at $40,000 and rises to roughly $47,000, but the interior and relative lack of refinement will be a letdown after time spent in the Golf R. The Ford Focus RS takes performance to an obscene level, but pricing begins at $49,669, on par with the 2016 BMW M235i when equipped with its optional $3750 all-wheel-drive system.

None of them bring together luxury, refinement, and performance with affordability quite as well as the Golf R.

HOW MUCH SHOULD I PAY?
Tempting though it may be to grab the most affordable Golf R, come resale time it’ll be helpful to have the $2015 Technology Package: adaptive cruise, blind spot monitoring, navigation, auto braking, front and rear parking sensors. Save $1400 by skipping the 6-speed DSG and you have a car just like our test specimen, a $43,715 2016 Volkswagen Golf R, including $1705 in delivery fees.

WHAT’S THE VERDICT?
If there could be just one car, only one vehicle produced by all the automobile assembly plants around the world, solely one vehicle that satisfactorily meets all the conflicting demands of all new vehicle buyers, the Mk7 2016 Volkswagen Golf R would be a top pick. It can carry surprisingly big loads, but it can also squeeze into a downtown parking spot. It’s luxuriously equipped and full of safety kit, but it’s not nearly as pricey as similarly outfitted cars from premium German marques. The Golf R is supremely quick, but it’s also decently economical. Performance tires will make it fun on a track day, but there’s all-wheel-drive for owners who spend half their year in winter conditions. Sure, it can’t seat eight like a Honda Odyssey, but there’s room for 150% more passengers than you’ll fit inside a Mazda MX-5 Miata.

But we want it to be the Volkswagen Golf R. Almost every time a new vehicle visits GCBC Towers, we’re ready on day seven for the vehicle to depart. Bring on the next one. Put another slice in the toaster. Change the channel. Turn the page.

The 2016 Volkswagen Golf R, on the other hand, need never leave. It’s difficult to envision replacing a minivan, our 2015 Honda Odyssey, with a compact hatchback. But the idea is now under serious consideration.

Timothy Cain is the founder of GoodCarBadCar.net, which obsesses over the free and frequent publication of U.S. and Canadian auto sales figures. Follow on Twitter @goodcarbadcar and on Facebook. The Golf R was supplied by Volkswagen Canada’s press office.