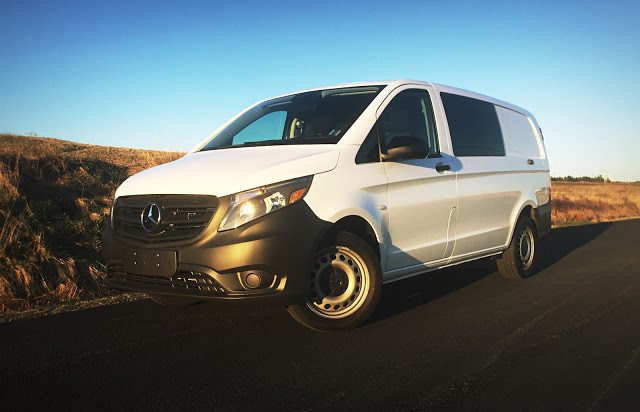 Spent much time in a senior citizen’s home lately? If there’s a space on the wall, they’ll fill it with a picture of a cousin’s grandchildren. If an endtable isn’t tasked with lamp duty, they’ll find a doily.

Mercedes-Benz is a senior citizen among automakers. These folks were building cars when Sir John A. Macdonald was serving his second term as Canada’s prime minister. When Mercedes-Benz sees an open section of wall or a spot that needs filling on an end table, they get down to business.

No midsize luxury sedan with coupe-like styling? Mercedes-Benz gave us the CLS. Is the market devoid of military-grade SUVs with V12 engines? Mercedes-Benz gives us the G65 AMG.

Or should we say, there was a great chasm. Mercedes-Benz has filled the void, built a class of one, stuffed the niche. The 2016 Mercedes-Benz Metris is a midsize commercial van.

WHAT IS IT?
Known abroad as the Vito, North America’s Mercedes-Benz Metris is marketed as both a cargo and passenger van, the latter of which – priced from around $40,000 – will be more likely to end up as an airport hotel shuttle than in your neighbour’s driveway. 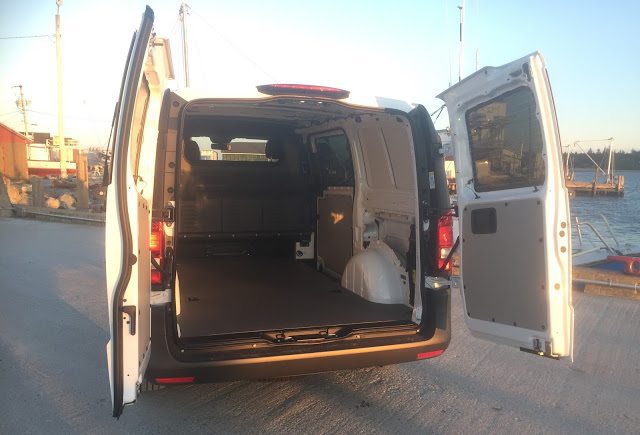 And then come the options. Our test specimen included an $820 window package (rearview mirror, fixed window in the right side sliding door, tinted glass, and fixed windows with defrost and wipers on the rear doors), a $630 cold weather package (heated seats, electrical auxiliary heating), a $550 interior lighting package, a $690 convenience package (steering wheel controls, cruise, extra keys, centre console), a $390 full-width partition, $280 worth of heated mirrors, a $160 fixed front window on the left side of the cargo area, and a $70 “bodybuilder connector” under the driver’s seat. With $2395 in fees, this is a $39,885 2016 Mercedes-Benz Metris cargo van.

HOW BIG IS IT?
Outside, the new Metris is only half an inch shorter than our long-term 2015 Honda Odyssey, bumper to bumper. But the Metris is a half-foot taller and three inches narrower.

That gives you an idea of how the Metris relates to a conventional consumer product, but in the commercial sector, the Metris doesn’t relate to the competition at all. End to end, the 2016 Mercedes-Benz Metris is nearly 13 inches longer than the Ford Transit Connect, nearly two inches taller, and four inches wider, mirrors included. As a result, the Metris’s total cargo area is 42% larger than the Transit Connect’s, an additional 1569 litres. Cargo length in the Transit Connect is two feet shorter than in the Metris.

Stacked up against the big dogs, the Metris obviously comes up short. With a regular wheelbase and a low roof, the 2016 Ford Transit is 18 inches longer than the 2016 Mercedes-Benz Metris and nearly eight inches taller. The Transit’s cargo area is fully one-third larger than the Metris’s and 14.5 inches longer. And that’s the smallest Transit. 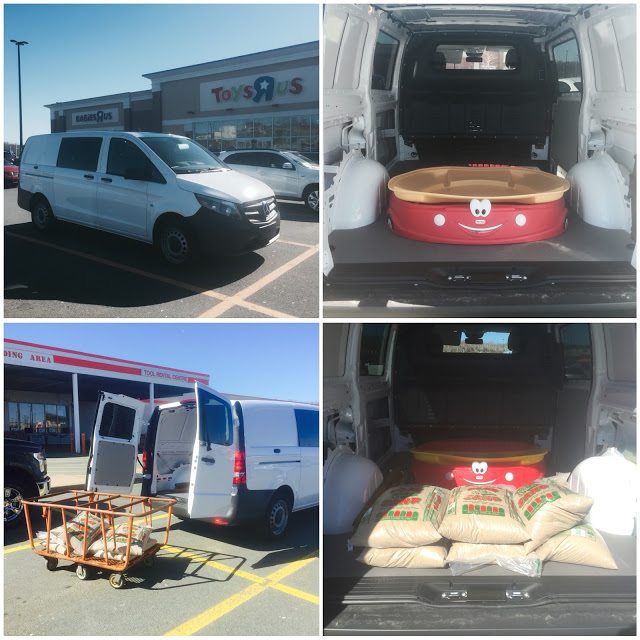 DOES IT WORK?
As a cargo van, the Mercedes-Benz Metris is undeniably terrific. It’s not just in the rectangular work zone that the Metris excels – of course it does – but up front, too. There are a trio of storage cubbies on top of the dash, another couple below the main controls, and a slot beside the key that’s large enough for an iPhone 6 in a wallet case.

At the rear, the left door opens after the right door with a strange, low-mounted handle to reveal a wonderfully low load floor. Heaving 400 pounds of play sand into the back of a pickup truck outside Home Depot would have been awful, but I did little more than slide six bags off the cart and into the Metris. One key letdown in the cargo area? If you want a second sliding door, it’ll cost a whopping $930.

But while the cabin is wisely laid out, the controls are antiquated, noise is as constant an irritation as you’d expect in a big metal box, and driver comfort is way down at the bottom of Mercedes-Benz’s list of priorities. Yes, the armrest is terrifically adjustable. But the driver’s seat can’t be moved back far enough for my not-quite-six-foot frame, the steering wheel doesn’t telescope, and the side mirrors are woefully undersized. Even at this lofty $40K price point, the Metris lacks backup sensors and a backup camera. Worst of all, the seats are uncomfortable. Officially so.

Mercedes-Benz offers a $430 Comfort Seat Package, but our Metris tester didn’t have said package. Which means we were in the Metris with the Discomfort Seat Package. We highly recommend spending $430 so you don’t have a ledge eating into the lowest portion of your back.

Uncomfortable or not, the Metris is surprisingly pleasant to drive. Impressive ride quality, aided by a crazy long 126-inch wheelbase, and stable handling are paired with the CLA and GLA’s 2.0L turbo. 208 horsepower may not sound like much now that Chrysler minivans are cranking out 287 ponies, but all 258 lb-ft of torque produced by the 2.0L are made known at a low 1250 rpm.

The Metris isn’t fun or fast, but it’s dynamically more competent than you expect it to be. 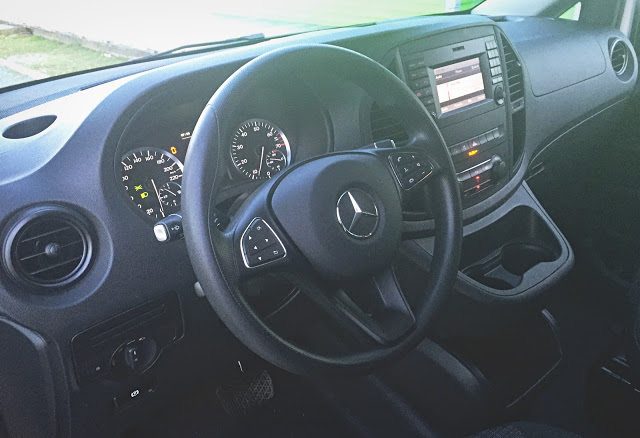 IS ANYONE BUYING IT?
The Metris accounts for one out of every five vans sold by Mercedes-Benz Canada so far this year, one in ten non-full-size commercial vans sold in Canada so far this year. Expect those small numbers to climb higher: the Metris has only been on sale since November. In the Metris’s first five months on the market, Mercedes-Benz Canada reported 311 sales.

In the United States, Metris sales figures were, up until recently, hard to come by. Through the first-quarter of 2016, the Mercedes-Benz Metris produced 6% of the American small commercial van sector’s sales and just under one out of every five Mercedes-Benz sales.

SHOULD I BUY SOMETHING ELSE INSTEAD?
Most of you will.

The Ford Transit Connect is an impressive small van. Ram’s ProMaster City pricing is aggressive. The Nissan NV200 and its Chevrolet City Express twin are particularly affordable. But if they’re all too small, the debate ends here and now.

The Metris, on the other hand, is a fuel efficient alternative to what may, for you, be unnecessarily large full-size vans. If the little vans are too small but you don’t require the excess of a full-size Sprinter, Transit, Express, Savana, or ProMaster, why deal with their dimensions in an urban environment? 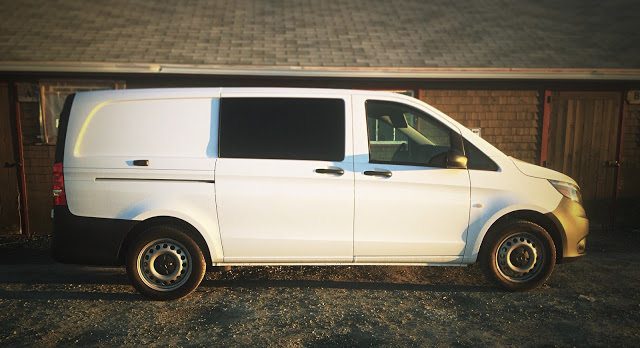 HOW MUCH SHOULD I PAY?
It’s unlikely you’ll be comfortable paying this much for a non-full-size cargo van, but it’s unlikely you’ll have to. Deals on the still-fresh Metris aren’t outrageous. Mercedes-Benz Canada’s current offers include a 3.99% lease APR over five years and a pre-tax, pre-fees payment of $349 per month with $4,050 down. The teasers aren’t even that great: Mercedes-Benz offers three years of no-charge scheduled maintenance, but the Metris needs very little maintenance. Mercedes-Benz makes a point of advertising the Metris’s 25,000-kilometre maintenance schedule.

However, Mercedes-Benz Canada is willing to do deals on vans. The Metris’s big Sprinter brother is presently marketed with $2000 or $3000 in discounts. If the Metris doesn’t soon carve out a niche for itself, prepare to spend less on Mercedes-Benz’s smaller van in the not too distant future. We would consider adding to the $36,295 Metris a $690 convenience package, the $820 basic window package, and $730 backup camera for a van that is moderately affordable but reasonably well equipped.

WHAT’S THE VERDICT?
For many small business owners who need a hugely spacious work van but do much of their driving in an urban environment with small parking spaces and crowded streets, the Mercedes-Benz Metris is the only choice.

That could be bad. Mercedes-Benz could have tried to steal a corner of the market simply by upsizing a small van (or downsizing a big one) and phoning in the execution. Instead, the Metris is an efficient and powerful van with pleasant driving manners and a structure built for heavy-duty work.

Timothy Cain is the founder of GoodCarBadCar.net, which obsesses over the free and frequent publication of U.S. and Canadian auto sales figures. Follow on Twitter @goodcarbadcar and on Facebook. The Metris was supplied by Mercedes-Benz Canada’s press office.