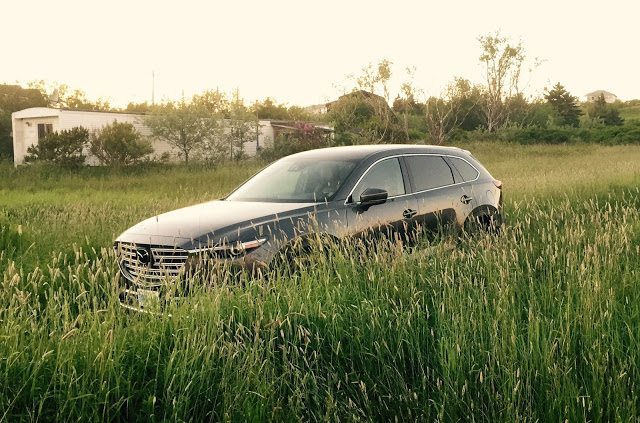 The third-generation Mazda 6 is is hugely agile and interactive, gorgeous outside, and handsome inside.

It’s also dreadfully unpopular, a genuine marketplace flop. The 6 offers no high-power engine, rides stiffly, and lacks the dramatic reduction in noise, vibration, and harshness we’ve come to expect even from mainstream family vehicles in 2016.

Mazda’s second effort at the three-row crossover, the second incarnation of the CX-9, couldn’t succeed purely on the merits of a pretty face and on-road poise.

The price point is too high, competitors have come too far, and the first-generation CX-9 was so rare that built-in loyalty remains a scarcely existent force for the automaker’s most expensive product.

The 2016 Mazda CX-9, however, is not merely Mazda’s version of a jacked-up 6 wagon. The Mazda CX-9 is surprisingly agile, gorgeous inside and out, plenty powerful, rides smoothly, and is sufficiently quiet inside.

Yet given the nameplate’s history, that’s no guarantee of popularity for the second-generation Mazda CX-9.

WHAT IS IT?
As the aptly-named Mazda MPV was entering its final years, Mazda began to implement a new three-row strategy. The six-seat Mazda 5 would appeal to buyers who wanted something small but appreciated a minivan’s sliding doors.

The less affordable Mazda CX-9, which arrived in 2007, would tackle established family crossovers such as the Honda Pilot and Toyota Highlander. Tackle it did not. The CX-9 remained hugely rare. Through the end of 2015, fewer than 13,000 had been sold in Canada. Ford Canada sold 15,615 Explorers in 2015 alone.

A long nine years later, Mazda is finally replacing the first-generation CX-9 with an all-new vehicle. Including delivery fees, Canadian pricing begins at $37,295 for the base CX-9 GS. All-wheel-drive, which is standard on every other CX-9, adds $2500.

Our test specimen is a 2016 Mazda CX-9 Signature. The powertrain is identical to that in every other all-wheel-drive CX-9, but the price jumps to $52,095. $300 worth of Machine Grey Metallic paint is the only option. There are, in fact, no equipment options available on any of Mazda Canada’s CX-9 trim levels.

HOW BIG IS IT?
Compare the second-gen 2016 Mazda CX-9 with two vehicles to get a better idea of its dimensions.

Canada’s top-selling three-row utility vehicle, the Toyota Highlander, is 8.3 inches shorter than the CX-9, bumper to bumper. That’s not an insignificant number. But the Highlander provides 11% more cargo volume behind the second row of seats and 6% more space for people. The volume differential feels far more substantial than that.

Smaller than the CX-9, of course, is Mazda’s own CX-5, Canada’s seventh-best-selling utility vehicle overall. The dimensional gap is significant: Mazda’s big CX-9 is 21 inches longer than the CX-5, five inches wider, and three inches taller on a wheelbase stretching nine inches farther. Cargo volume behind the CX-9’s roomier second row is 12% greater.

DOES IT WORK?
Mazda, at its best, is an automaker that mixes its lightweight philosophy, dynamic excellence, and stylistic talent with the refinement heretofore seen only at Mazda’s rival automakers. The CX-9 works because it’s every inch a Mazda, and then some.

The new second-generation 2016 Mazda CX-9 Signature is 258 pounds lighter than the top-trim version of Mazda’s first-generation CX-9. The CX-9 majors in on-road balance, not merely the capable Mazda 6-like handling but also firm-yet-compliant ride quality over Nova Scotia’s awful coastal roads. And there seems to be little disagreement over the new CX-9’s level of exterior and interior elegance. 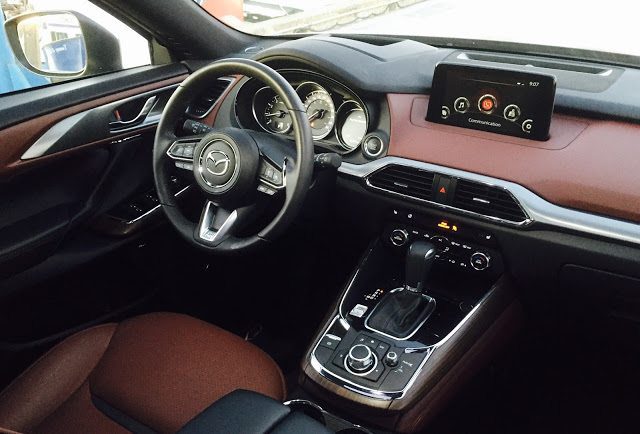 But you anticipated all that. You expected a new family crossover from Mazda to look good, drive nicely, and be lighter and thus wildly more efficient than the CX-9 of 2007-2015, which consumed 28% more fuel in city driving than the 2016 CX-9.

Expectations for Mazda’s level of refinement and the availability of power, on the other hand, were lower. Criticized in all corners for road and wind noise, cabin vibration, and stiff rides, Mazda put such criticisms to bed when it came time to release the second CX-9. There is, it must be stated, an underlying sense of the engine, in part because Mazda successfully squashed road and wind noise, in part because a small, turbocharged, direct injection four-cylinder is by nature an irritant, and hushing such a powerplant isn’t easy.

Otherwise, the CX-9 Signature’s cabin is the tour de force one demands from a Mazda priced above $50,000, nearly $10,000 beyond the base price of Canada’s top-selling premium brand utility vehicle, the Audi Q5. Material quality is high, the sense of solidity is palpable, and the design is sensible and intuitive.

Truthfully, Mazda Connect should be quicker. The centre tunnel’s rosewood trim created a ledge that interfered with my right knee’s comfort. Visibility is by no means excellent. And even at $52,395, there are no ventilated seats and no panoramic sunroof. The keyless proximity access was finicky. These are not major complaints in an otherwise exemplary interior.

Under the hood, there’s only the slightest hint of off-the-line lag, and then the 2.5T makes its presence known as a torque monster, with power available in abundance from 2000 rpm northward, shuffling power through the transmission’s six speeds with alacrity.

‘;
document.getElementById(“vinads_div”).innerHTML = lfAd;
}
});
Alas, the CX-9 can only barely be considered a three-row vehicle. Those two rear-most seats are clearly intended for occasional use by humans unblessed with legs.

What’s worse, the air-conditioning in our tester – a brand spankin’ new CX-9 nobody else has yet driven – was not remotely up to snuff, so useless we have to assume that the problem was unique to our CX-9 Signature and not a CX-9-wide issue. On Saturday, for instance, a 25°C day, running the fan speed on high with the temperature set on its coolest setting was not sufficient even after 45 minutes in the car. In our long-term Honda Odyssey immediately thereafter, six or seven minutes with the temperature set at 19.5°C and the fan speed on its second-lowest setting required turning the fan speed down so we didn’t get a chill.

Yes, and yet, despite a handful of mostly minor character flaws, the 2016 Mazda CX-9 Signature stands head and shoulders above its rivals because of in-motion greatness and the overarching feeling of special.

You don’t get special in a Honda Pilot, Toyota Highlander, or Nissan Pathfinder.

IS ANYONE BUYING IT?
The new CX-9 had only just begun arriving in Mazda’s Canadian showrooms when this Signature model was dropped off at GCBC Towers. Nevertheless, because of a brief stretch of availability at the end of May, Mazda Canada made May 2016 the CX-9’s best May ever.

308 sales doesn’t sound like much, because it isn’t, but we’ll get a better grasp of CX-9 popularity as availability improves in the coming months. 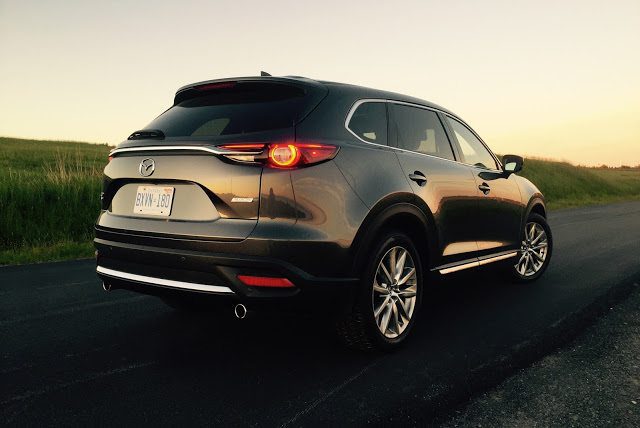 SHOULD I BUY SOMETHING ELSE INSTEAD?
If you need genuine third-row usefulness or worry that our air-conditioning experience won’t be unique to our test example, yes, you should look elsewhere.

You’ll perhaps feel compelled to check out the more family-friendly Honda Pilot and the Ford Explorer, a long-time marketplace favourite, too. You perhaps owe it to yourself to consider the Ford Flex and Kia Sorento, as well.

HOW MUCH SHOULD I PAY?
Mazda’s Signature trim level make the 2016 CX-9 nicer, but it doesn’t really make it better in many tangible ways. If you want a very luxurious Mazda CX-9 we suggest saving $3000 and opting instead for the 2016 Mazda CX-9 GT with the safety-centric Technology Package. 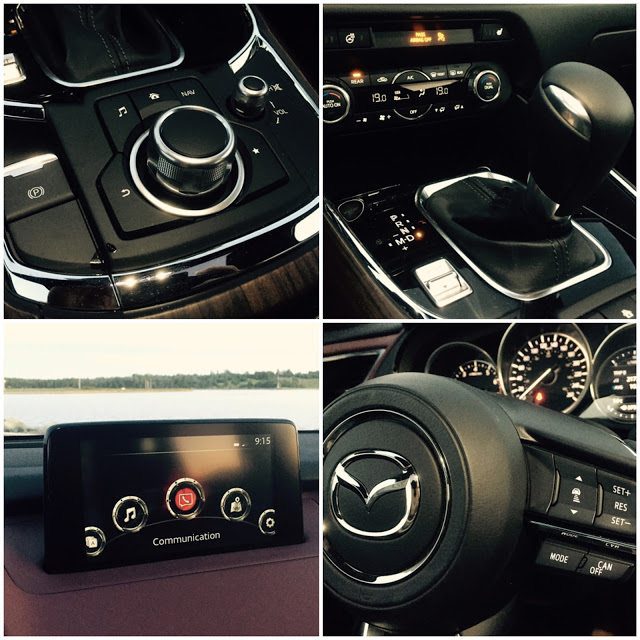 WHAT’S THE VERDICT?
We put more than double the amount of mileage on the 2016 Mazda CX-9 Signature than we typically do on a manufacturer-supplied press car. We didn’t have to do so; we weren’t overrun by vital long drives. We chose to.

Yet pleasant on-road manners, the kind of behaviour that always leads objective car writers to give credit, is par for the course at Mazda. The second-generation CX-9 excels because Mazda further refined the invisible bits in order to cancel out noise and vibration, the CX-9 excels because of Mazda’s addition of plentiful torque, and because Mazda removed the stiff and sometimes objectionable ride of less costly Mazdas.

It’s not perfect, certainly not for families who would otherwise end up in a high-lux minivan. But there are a handful of details which, if remedied, would make the 2016 Mazda CX-9 the undeniable class leader. After an enthusiastic test drive, many prospective customers will justifiably feel certain the CX-9 is already the indisputable leader of the midsize crossover pack.

Timothy Cain is the founder of GoodCarBadCar.net, which obsesses over the free and frequent publication of U.S. and Canadian auto sales figures. Follow on Twitter @goodcarbadcar and on Facebook. The CX-9 was supplied by Mazda Canada’s press office.