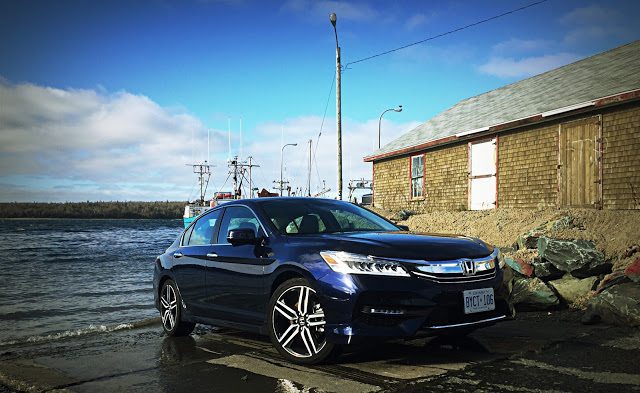 The last time we tested a Honda Accord was in January 2014.

That car, an Accord Hybrid, isn’t part of Honda’s lineup for the 2016 model year, a year that’s hosting a round of updates to other Accords.

Midsize cars aren’t the force they were just a few short years ago in Canada, and the market’s turn away from these intermediate sedans is particularly apparent in Hondaland. The Accord produced 15% of Honda’s Canadian sales as recently as 2008; the CR-V compact crossover just 13%. But those numbers have undergone dramatic change since the recession. The Accord is responsible for less than one-in-ten Honda sales in Canada; the CR-V accounts for a quarter of the brand’s volume.

Nevertheless, there are still 9000 Canadians who buy or lease a midsize car each month.

Which one should they choose? We have a recommendation.

WHAT IS IT?
Launched in 1976 as a curious three-door, Japanese upsized compact hatchback, the Accord has managed to stand the test of time with significant updates every four or five years and mid-generational refreshes. For model year 2016, the ninth-generation Accord which debuted for model year 2013 is slightly restyled inside and out, structurally stiffened, and safer. Also, the Accord is now available with Apple CarPlay and Android Auto. 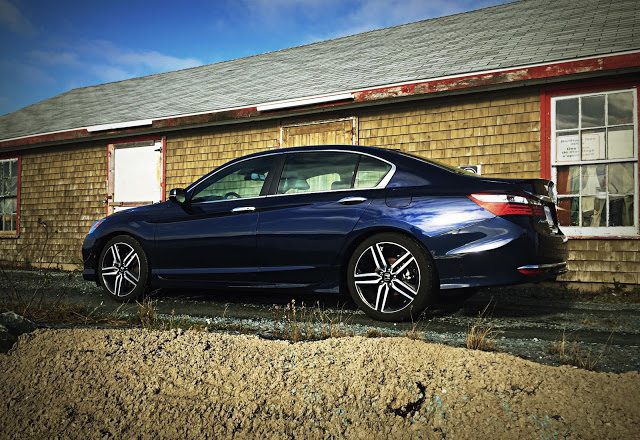 Pricing for Accord sedans in Canada starts at $25,945, or $27,245 with the optional continuously variable automatic transmission. That $1300 CVT can also be tacked on to the base price of the $28,485 Accord Sport four-cylinder and this $32,885 Accord Touring four-cylinder.

To get a V6 in the Accord, you must now skip past the LX and Sport trims and head straight for the EX-L and Touring. The V6 adds $3280 to the cost of a four-cylinder EX-L or $2800 to the cost of this Accord Touring CVT.

HOW BIG IS IT?
The Accord’s available passenger volume, while substantial and sufficient, doesn’t measure up to the 2016 models of the Hyundai Sonata, Kia Optima, Subaru Legacy, Ford Fusion, Toyota Camry, Volkswagen Passat, Nissan Altima, and Chrysler 200. Similarly, the Accord’s cargo volume places the Honda seventh in its class behind the Sonata, 200, Fusion, Optima, Passat, and Chevrolet’s new Malibu.

Yet at 193.2 inches long and 72.8 inches wide, the Accord is 2.3 inches longer than the more spacious Toyota Camry and an inch wider. The Accord is by no means a loser when it comes to the efficiency of its space usage, but other automakers have produced slightly more with slightly less.

Relative to Honda’s growing, tenth-generation Civic, the Accord is 10 inches longer, two inches wider, and two inches taller. This creates an Accord cabin that’s 6% larger, but the Accord’s trunk is less than 3% bigger than the Civic’s.

In addition to size and space and available power, much of what historically separated bigger cars from their compact brethren was refinement, the aura of expense, the impression of solidity. Is that still true with the 2016 Civic, a car which isn’t that much smaller than this Accord? We’ll find out when we spend a week with the new version of Canada’s best-selling car in late January. 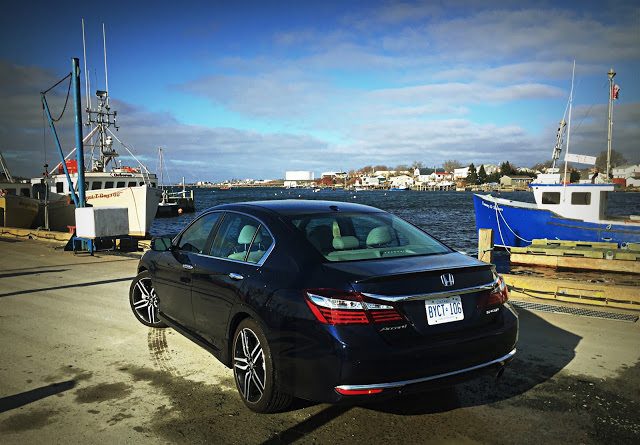 DOES IT WORK?
The Accord’s interior is not without its letdowns. There’s no volume or tuning knob, as Honda’s stylish but unnecessarily flush touchscreen makes an unwanted appearance here. The heated seat buttons near the shifter are clunky and only offer two settings. Excessive piano black finishes quickly appear tarnished. And with a modest centre hump, the Accord’s rear seat doesn’t have the vast large car feel of so many so-called midsize cars.

Yet criticisms against Honda’s built-in infotainment unit are now all but moot, with Apple CarPlay and Android Auto now standard across the board. We’re among the iPhone faithful here at GCBC, so we didn’t test Android Auto. But this, our first experience with Apple CarPlay, was a revelation. Apple didn’t do anything spectacular with this system, but everything in Apple CarPlay operates the way you’d expect it to, rather than in the convoluted, nonsensical fashion of so many automotive infotainment units. The music app is better than iTunes on your iPhone or iMac. Messaging, completed through Siri, is safe and simple. And your occupants will love when someone texts you a message full of emojis.

Underway, with my iPhone plugged in, the Accord’s seats aren’t quite as bolstered as I’d like in a car that can tackle a corner as capably as an Accord Touring on 19-inch wheels with relatively low profile tires. Unless you’re accelerating with some haste, the continuously variable transmission is mostly inoffensive, but it will cramp your enthusiastic style.

Only if you do actually possess an enthusiastic style, that is. Accord buyers who don’t truly enjoy driving probably won’t want this Accord. A less sporting Accord, without this car’s more lively, quicker steering and low profile tires will be more suited to a ho-hum daily commute. An Accord on 17-inch wheels won’t ride this firmly, nor will it turn in this sharply.

But oh, for the common Mr. Smith who enjoys driving; who wants to take the long way home in his Mr. Everyday sedan; who wouldn’t spend extra on the CVT if he could convince his 17-year-old daughter to learn how to drive a manual; who understands that the expensive 3.5L V6 is unnecessary because this Mr. Commonplace 2.4L I-4 revs so sweetly; the Mr. Nineties who remembers Hondas with double wishbones out back and in front; for that guy, this Accord is the one to have.

Sweetly balanced, poised and polished, fun but never raucous, the 2016 Honda Accord is a luxury sports sedan without the outlandish power or luxury price tag. It’s a quiet and composed sedan that only ever lets its hair down when asked, always hinting at an underlying foundation of traditional Honda dynamics but never displaying the expected accompaniment of excessive wind whistling, road noise, and ugly wheels.

IS ANYONE BUYING IT?
In the United States, the Accord isn’t just America’s second-best-selling midsize car, it’s the second-best-selling car overall. Only the Toyota Camry sells more often. Accord volume in the U.S. is down 10% in 2015, however, even though year-over-year volume increased in each of the last three months. Segment-wide, midsize car volume has fallen 2% in the U.S. through 2015’s first 11 months.

In Canada, meanwhile, where midsize car volume is down 7% this year, Accord volume has tumbled 16%. Only the Optima, Altima, and Passat are tumbling faster. November Accord sales spiked to 22% to a segment-leading 1306 units. Honda Canada sells 4.5 Civics for every Accord that leaves the showroom. 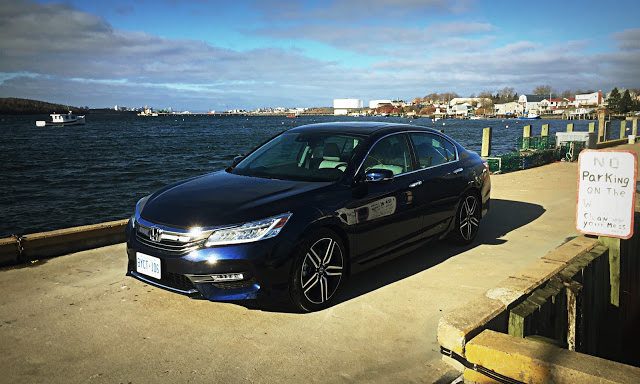 SHOULD I BUY SOMETHING ELSE INSTEAD?
No.

The tradition continues in Korea, with the Hyundai Sonata and Kia Optima offering more equipment for the dollar. If the Volkswagen Passat once again becomes available with a diesel engine, the fuel economy benefits of that car make it an interesting choice. The Mazda 6 is a true driver’s choice, but it might not be big enough inside for your needs. The Ford Fusion is an enjoyable drive and offers available all-wheel-drive. The Subaru Legacy is bland but provides standard all-wheel-drive. The Toyota Camry, particularly in the XSE V6 format we tested last winter, is priced like this Accord and, surprisingly, is unlikely to disappoint the semi-enthusiast driver. 2016 also sees the debut of an all-new Chevrolet Malibu, a handsome, lightweight car that’s earning early plaudits.

HOW MUCH SHOULD I PAY?
If all you need is an Accord that drives like this Accord, the 2016 Honda Accord Sport costs CAD $29,785, or $1300 less if you stick with the 6-speed manual transmission. The Accord Sport features the Touring’s big wheels and quicker steering but loses some of the interior’s less vital bits.

But while some competitors are somewhat superior in some areas, the Accord is among the class leaders in every area. At less than $35,000, the 2016 Honda Accord Touring also makes a case for itself as a veritable competitor of $40,000 German sports sedans. The same simply can’t be said of the Accord’s direct rivals.

Timothy Cain is the founder of GoodCarBadCar.net, which obsesses over the free and frequent publication of U.S. and Canadian auto sales figures. Follow on Twitter @goodcarbadcar and on Facebook. The Accord was supplied by Honda Canada’s press office.