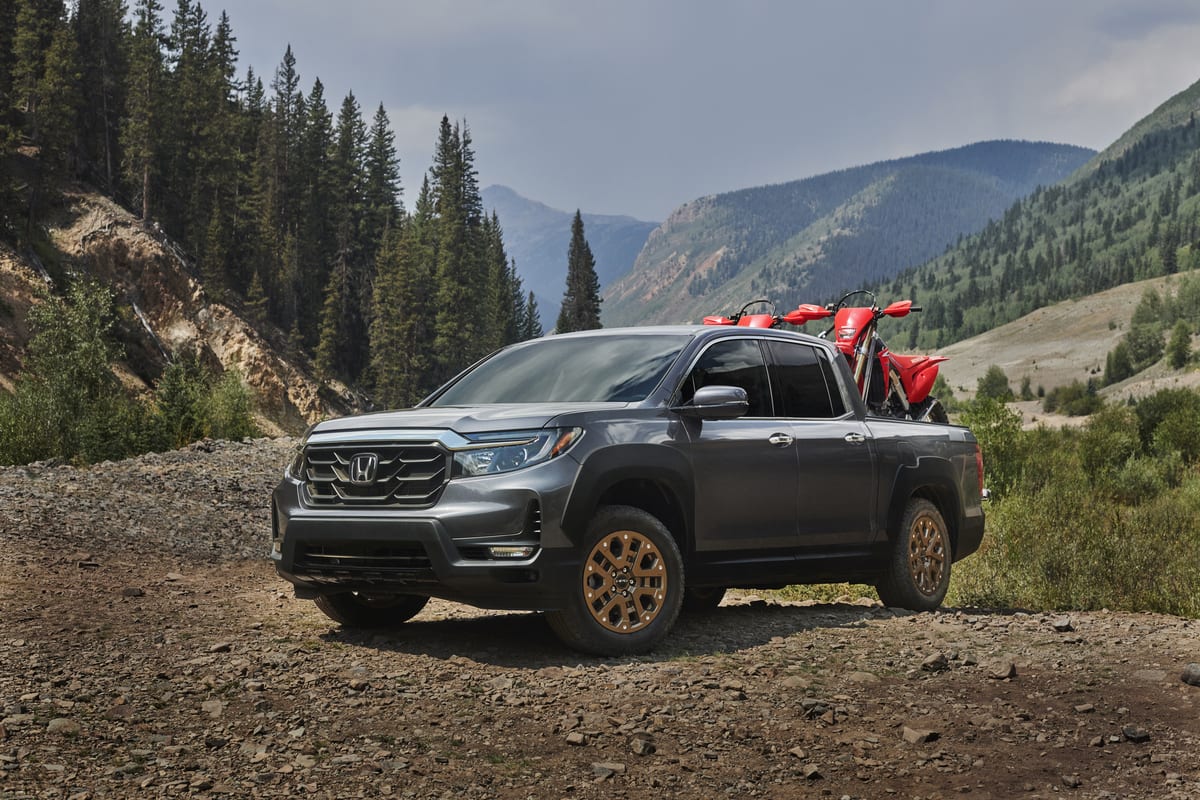 Taking a look at the best of Honda's 2021 models

The Best Honda Vehicles for 2021

Picking the best vehicles out of an automaker’s lineup is an easy job in some cases, but when every vehicle a company makes is solid, it can get quite tricky. That’s the story with Honda, whose 2021 lineup features major updates in some spots and carry-over models for others. 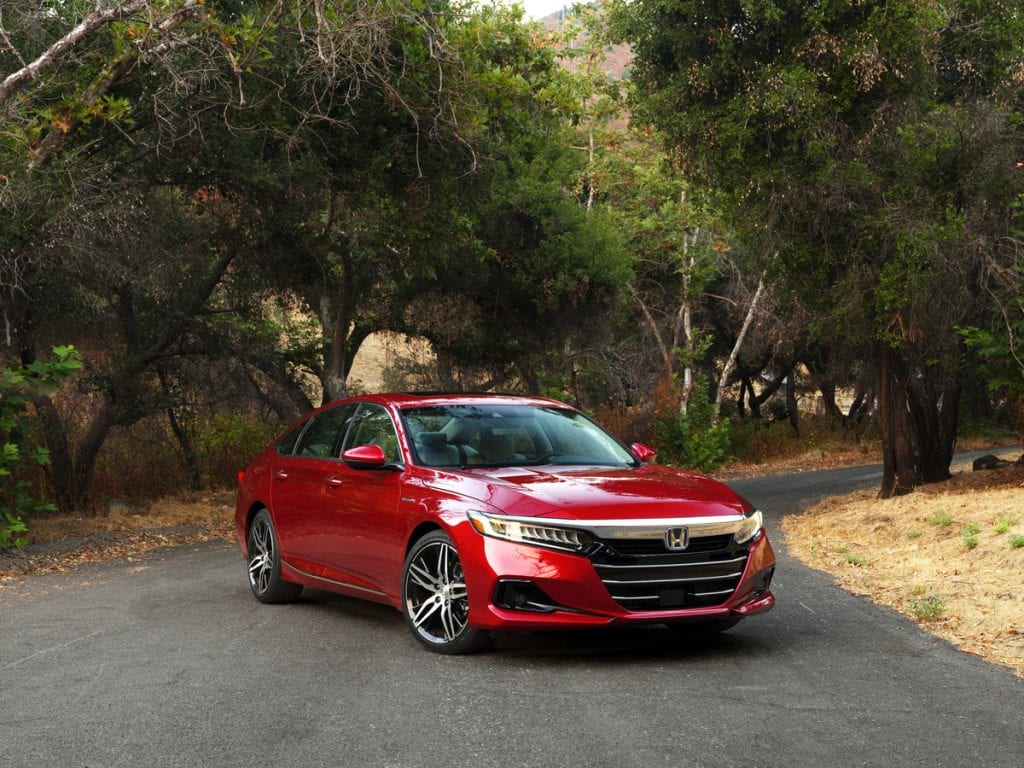 The Accord isn’t just the best of Honda’s lineup, it’s a car that nearly any automaker would love to offer. Now in its tenth generation, the Accord has almost been around long enough to remember Watergate, but Honda has improved the car every year to keep it relevant and at the top of its class in reliability, fuel economy, and standard features.

The 2021 Accord received only minor upgrades from the previous year, but the changes it did get make it even more desirable than before. The new car will have high-end features like wireless Apple CarPlay and Android Auto, and will feature powertrain tweaks that give it better throttle response and smoother acceleration.

The Accord’s sharp style and engaging driving dynamics are what really get buyers interested, and the new model will be no exception. Changes to the car’s engine control systems give it better throttle response, and hybrid models have been given smoother, more linear acceleration. 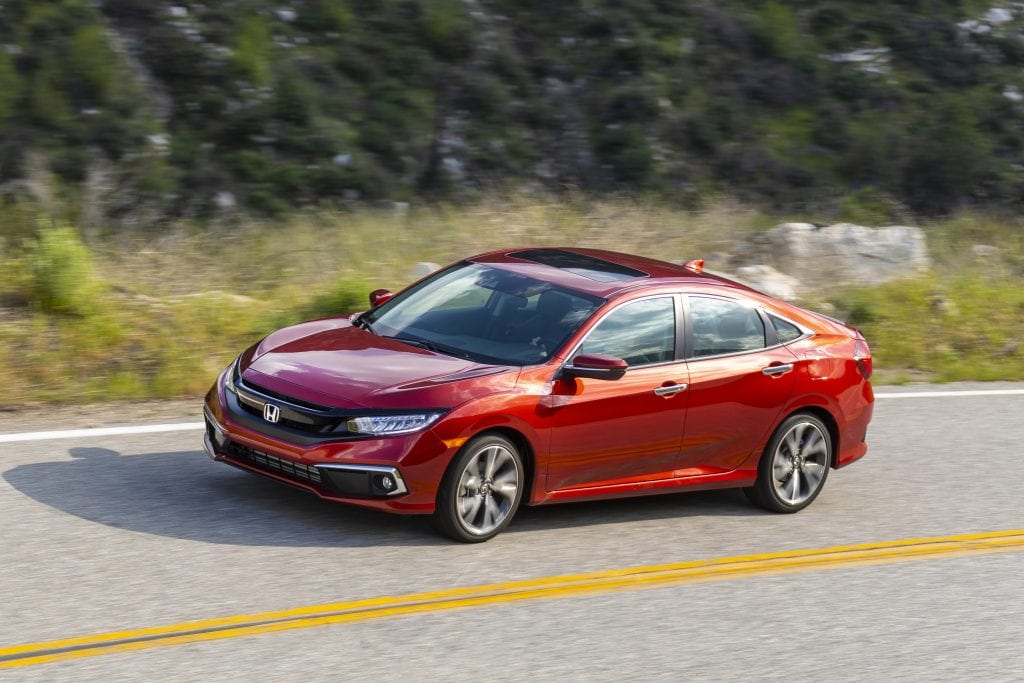 The Honda Civic’s popularity knows no bounds, as the compact car has been a mainstay for almost 50 years. It’s also been a part of Honda’s performance vehicle lineup for many years, having worn the legendary Si and Type R badges, and the recent versions of these cars are innovative rocket ships that can put up some truly impressive numbers.

Power for the 2021 Civic line comes from one of two engine choices. The first is a 2.0-liter inline-four that produces 158 horsepower and 138 pound-feet of torque. The upgrade is a turbocharged 1.5-liter four-cylinder that makes 174 hp and 162 lb-ft of torque. Power is sent to the front wheels through a continuously variable transsmision.

Part of the Civic’s appeal is its flexibility and the level of choice it offers buyers. It’s available as a sedan, coupe, or hatchback, but we’ve settled on the sedan here because it’s the most traditional of the three body styles and offers the most family-friendly interior space. 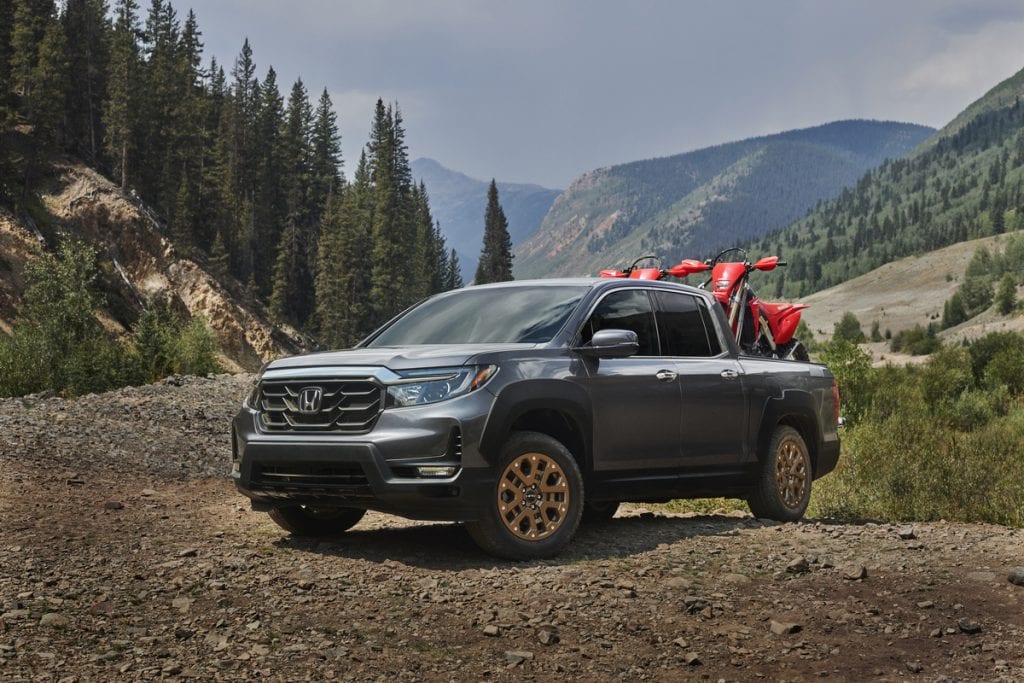 Honda’s truck-but-not-a-truck is about to enter its third generation with a bold new look and innovative new features. The Ridgeline has always been an outlier in the truck market because of its unibody construction and car-like ride, but the automaker has taken steps with the 2021 redesign to make it more rugged and capable, both on-road and off. The new truck will feature a strong, boxy new look, fully automatic torque-vectoring all-wheel drive, and a load of standard safety tech.

Power for the 2021 Ridgeline comes from Honda’s corporate V6 engine. It’s the same 3.5-liter unit that lives in the Odyssey minivan, Pilot SUV, and Passport crossover. That engine is paired with a nine-speed automatic transmission and either front- or all-wheel drive. The new truck will also offer a special torque-vectoring all-wheel drive system that can send up to 70 percent of the power to the rear wheels. Once there, the system can shift power between the individual rear wheels as well.

Part of what has made the Ridgeline such an attractive choice, both for buyers and for this list, is its ability to bend genres and be as good a daily driver as it is a truck. The new model should continue to meet, and will most likely exceed, those expectations. Honda says that the 2021 Ridgeline will be able to tow up to 5,000 pounds and can carry 1,580 pounds of payload, which should make it more than enough truck for the casual buyer. 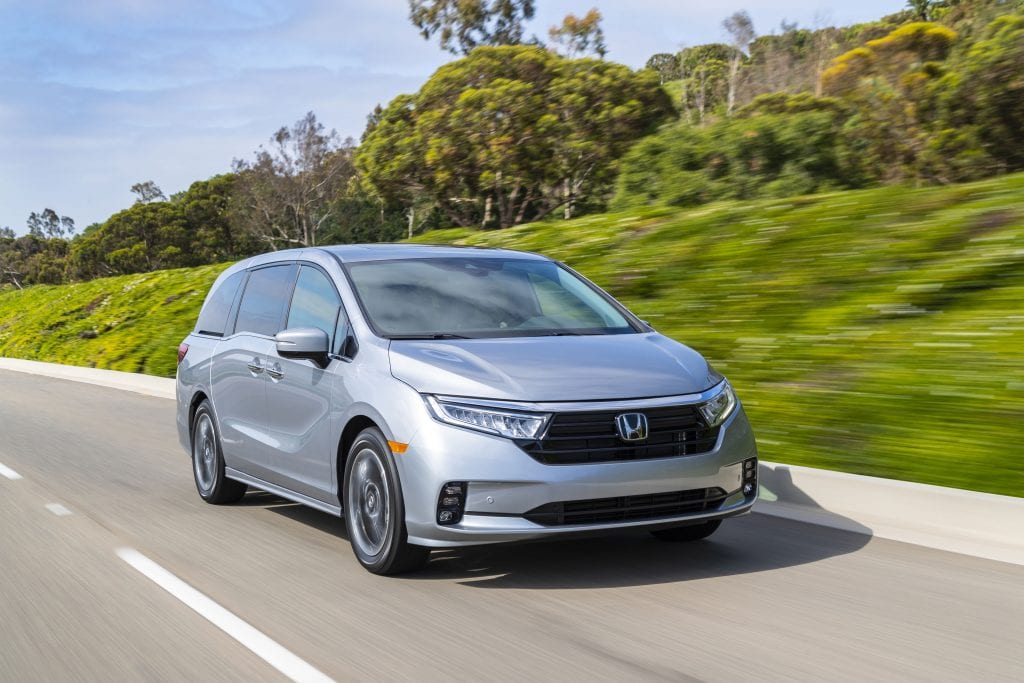 Minivan sales have been on the decline for years, as crossovers and SUVs rule the market, but that hasn’t stopped Honda from delivering one of the best family vehicles of any type in the Odyssey. With a thorough update for the 2021 model year, Honda showed its commitment to the minivan space with thoughtful new features like CabinWatch, which lets parents see and communicate with passengers further back in the vehicle. On top of that, the new van will come standard with the Honda Sensing suite of advanced safety equipment.

Like the Ridgeline, the Odyssey is powered by a 3.5-liter V6. It produces 280 horsepower and 262 lb-ft of torque through a 10-speed automatic gearbox. There’s no hybrid option like there is for the 2021 Toyota Sienna, but the Odyssey will still return respectable fuel economy, landing at up to 28 mpg highway.

The Odyssey has been so endearing over the years because of Honda’s ambition to pack the van with as many innovative and useful bits of tech and gear that it can. The latest Odyssey can be equipped with a vacuum cleaner, an in-cabin communication system, and has enough storage to take the whole family on a road trip. 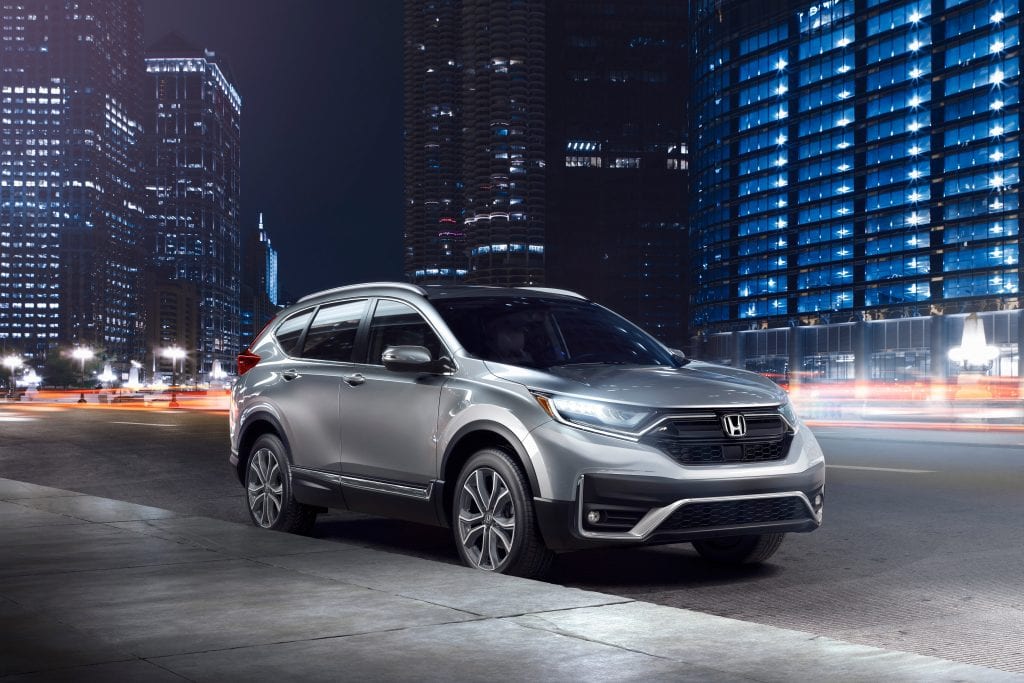 In the early days of compact crossovers, the market was dominated by two forces: The Toyota RAV4 and the Honda CR-V. Both have evolved over the years and both remain at the top of the class. The 2020 CR-V was awarded a Top Safety Pick designation by the Insurance Institute for Highway Safety and picked up a Green SUV of the Year award from Green Car Journal. Beyond that, it’s a solid vehicle with room for families and a solid slate of entertainment and comfort features.

We expect that the CR-V will carry on into the new model year unchanged, which is completely fine. The 2020 CR-V is refined, quiet, and hits all the right notes that a family vehicle should. There’s generous head and legroom and a spacious cargo area that can accommodate a family’s worth of gear with room to spare for a dog.

The CR-V will continue to be powered by either a 190-horsepower turbocharged 1.5-liter inline-four or a 2.0-liter engine with electric motors that combine to produce 181 horsepower. Front-wheel drive is standard and all-wheel drive is available.

Author’s note: Having just driven both the standard 2020 CR-V and CR-V Hybrid, it’s easy to say with confidence that they are among the most useful and refined small crossovers on the market today.

Buyers have gravitated toward SUVs and crossovers for years, so it’s no surprise that Honda decided to capitalize on that craze by expanding its lineup years ago. The HR-V is the smallest crossover that the automaker currently sells, and slots into the lineup below the CR-V crossover.

The 2021 HR-V is powered by a frugal but somewhat unrefined 1.8-liter inline-four that produces 141 horsepower and 127 pound-feet of torque. Power hits either the front or all four wheels through a continuously variable transmission.

The Honda Passport made its return to the automaker’s lineup a couple of years ago as a more rugged and compact version of the super popular Pilot SUV. It shares many design features with its larger, more family friendly brethren, but carries its own distinct adventuresome personality.

Not much has changed for the 2021 Passport. It’s still powered by Honda’s corporate 3.5-liter V6 that pumps out 280 horsepower through a nine-speed automatic transmission. The Passport is front-wheel drive and can be outfitted with all-wheel drive. 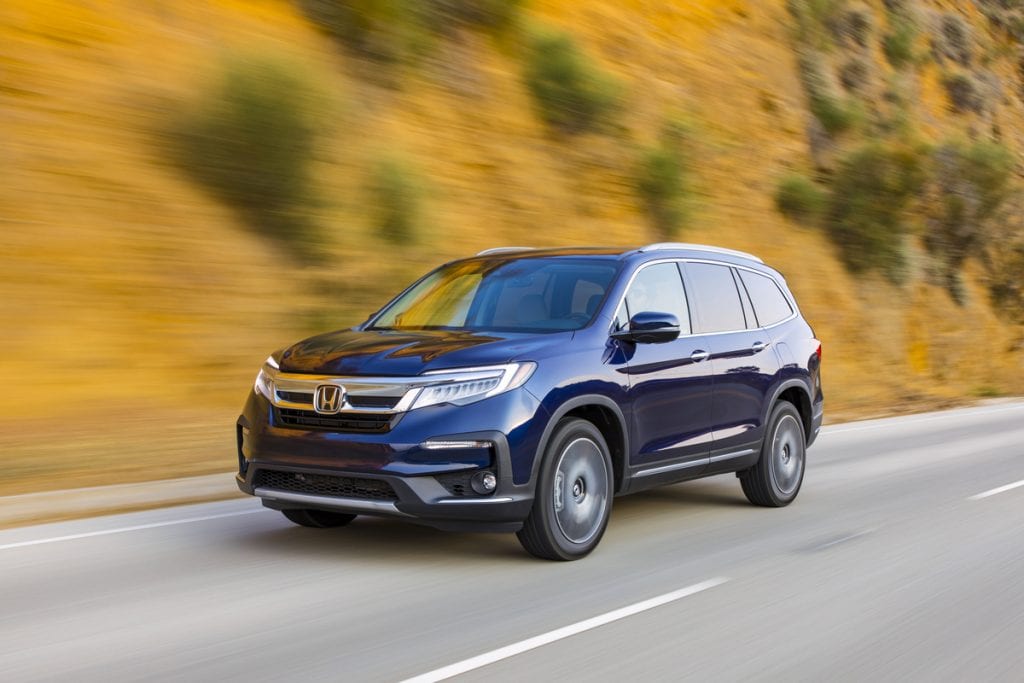 The Honda Pilot is the minivan for people who dislike minivans, and has been the automaker’s big people carrier for years. The latest version picks up a more refined automatic transmission and a new Special Edition trim level.

All versions of the Pilot are powered by a 3.5-liter V6 engine that makes 280 horsepower and 262 lb-ft of torque. The new Pilot gets a refined nine-speed automatic transmission as standard equipment and front-wheel drive by default. All-wheel drive can be optioned in.