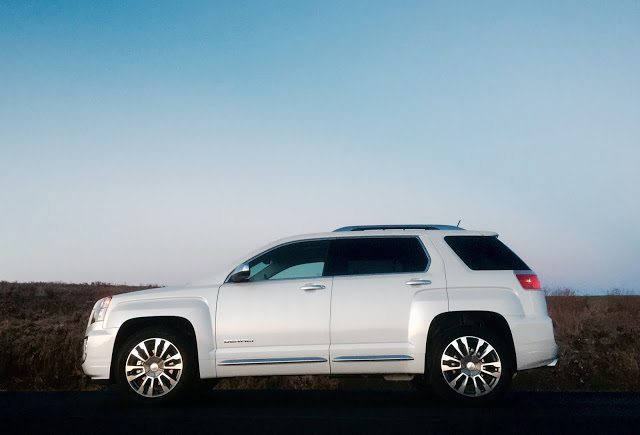 As a successor to the defunct Pontiac Torrent and fraternal twin of the second-generation Chevrolet Equinox, the GMC Terrain arrived in 2009 with blocky, eye-catching styling, a powerful V6 engine option, and an expansive rear seat.

As is typically the case in the United States – and periodically in Canada – the GMC version of the Chevrolet crossover didn’t sell as often as the Chevrolet. But the Terrain is a popular vehicle: it’s the 18th-best-selling utility vehicle in Canada and the U.S. so far this year. Combined, the Equinox and Terrain twins form a dynamic duo even in old age. U.S. sales through the first 11 months of 2015, at 355,143 units, are far in excess of the best-selling Honda CR-V’s total, for instance.

“Old age” is nevertheless an apt descriptor. General Motors introduced the 2016 Terrain at the New York International Auto Show earlier this year. Yet even though 2016 will be the seventh model year for the first-generation Terrain, GM’s press release included the word “new” 13 times, not including the New in New York.

For example, GM says the front and rear fascias are new. Can you tell? There are new wheel designs and a new chrome-trimmed shifter, too.

GM is also careful to use the word, “revised.” The Terrain’s instrument panel centre stack, which needs to be new, is revised, and not noticeably. In the process of revising and making some minor items new, GM didn’t make any meaningful changes to the powertrain, chassis, or interior configuration, where changes are overdue.

Rather than review the slightly updated 2016 GMC Terrain Denali V6 AWD which GM Canada delivered to GCBC Towers in mid-December – a vehicle we already reviewed before this minor MY2016 update – we’ll keep it simple. Prior to a more significant revamp in the future, GMC will still sell tens of thousands of Terrains regardless of the vehicle’s aged state. So here are four reasons why the Terrain will still be successful; why it’s good enough as is, along with four reasons why the Terrain’s old age causes the smallest GMC to feel so thoroughly outdated; why a refresh won’t satisfy the discerning buyer.

#1: Rear Seat Space
For buyers who prioritize passenger space above all else, the Terrain (and its Equinox sibling) are unbeatable in their segment and challenge the most spacious SUVs and crossovers when it comes to rear seat legroom. The rear bench, which slides forward to maximize limited cargo volume, can be slid rearward to open up a cavernous footwell featuring cross-your-legs space and a flat floor.

#2: Ride Quality
The Terrain Denali features dual-stage dampers not available on other Terrains, so it’s possible that the Terrain Denali’s exceptional ride quality – the way occupants are isolated from imperfect roads – is unique in the Terrain/Equinox family. GM’s focus on limiting the scope of the Terrain’s athleticism in order to maximize ride comfort is a blessing to buyers who wouldn’t care if the Terrain was slightly sharper in the corners. 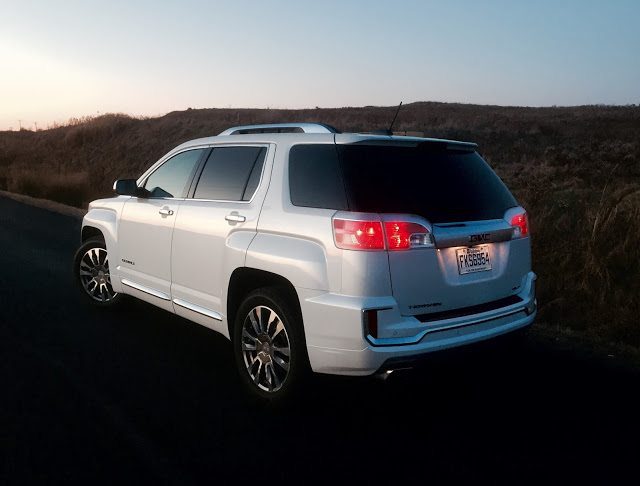 #3: Horsepower
The Terrain Denali’s optional 301-horsepower is a beast. No, it’s not an unequivocally fast car, but power is abundant and torque is always present. The Terrain’s 6-speed automatic is a dampener of fun, hanging on to gears annoyingly while upshifting yet never desirous of a kickdown. But overwhelming the relatively smooth 6-speed’s is the horsepower on tap, the kind of horsepower you can’t get in a Honda CR-V, Toyota RAV4, or Ford Escape.

#4: Right-Sized Exterior
Not too big, not too small? Think of it this way: the Ford Escape is more than seven inches shorter and more than three inches narrower, bumper to bumper, than the Terrain. But the Edge, Ford’s larger two-row crossover, is nearly three inches longer and three inches wider than the Terrain. The Edge’s dimensions, by no means the size of larger three-row crossovers like the Ford Explorer or GMC’s own Acadia, serve to clarify the Terrain’s tweener size: decently spacious inside without any exterior unwieldiness.

#2: Missing Features
This 2016 GMC Terrain Denali stickers at $48,560, so you’re bound to reap the benefits of bounteous luxury equipment, right? Yet the kind of equipment you’d expect in a small GMC SUV even at $40,000 is missing. There’s no dual-zone climate control, no panoramic glass roof, and no four-position lumbar support. Worst of all, there’s no proximity access – you need to blip the fob – and the Terrain demands that you insert a key to ignite the V6.

#3: Dreadful Tech Execution
The lack of proximity access certainly causes the Terrain Denali to feel dreadfully behind the times, but that sensation is unfortunately worsened by poor tech interfaces. Yes, there’s a backup camera, but the picture is grainy, mostly washed out in daylight and scarcely legible at night. GMC’s IntelliLink infotainment unit isn’t tremendously difficult to learn, but it’s slow and not keen on comprehending voice commands. Indeed, the touchscreen’s failings are exacerbated by its distant location, so very far away from the driver, which forces a long reach to access even the lower-left corner. More conventional buttons are arrayed beneath the touchscreen, but they are haphazardly sprayed across the dashboard.

#4: Small Cargo Area
Compromise is key, marital counsellors and realtors like to say. But small crossover buyers who want space for rear seat occupants and cargo capacity don’t need to compromise on their demands in the Toyota RAV4 or Honda CR-V. GMC already did the compromising for you, however, by creating a vast rear seat at the expense of the cargo area. With five passengers in place, the 2016 Honda CR-V Touring AWD will swallow 1000 litres of stuff; the 2016 Toyota RAV4 XLE AWD will accept 1087 litres in the cargo area. With only 895 litres of space behind the rear seats, the 2016 GMC Terrain Denali V6 AWD provides 12% less space for stuff than the CR-V and 21% less space than the RAV4, a loss of capacity made all the more disastrous by the Terrain’s inconveniently shaped cargo area.

Alas, there’s no bigger Terrain deal breaker at GCBC than the Terrain’s inability to hold a family’s worth of luggage and assorted goods for a week’s vacation.

Timothy Cain is the founder of GoodCarBadCar.net, which obsesses over the free and frequent publication of U.S. and Canadian auto sales figures. Follow on Twitter @goodcarbadcar and on Facebook. The Terrain Denali was supplied by GM Canada’s press office.