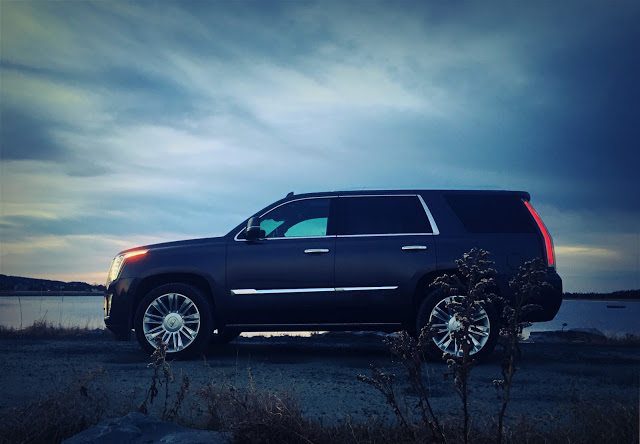 13.4 L/100km isn’t an acceptable figure for the owner of a Honda Civic, Canada’s best-selling car. But 13.4 L/100km represents a a massive improvement for the Cadillac Escalade, a vehicle forced to complete a far broader range of tasks, from accelerating faster and carrying more people to towing heavier trailers and hauling heavier loads.

In the United States, Escalade sales rose 3% to 2,774 units in August 2005, the month in which Hurricane Katrina hit the Gulf Coast. One month later, with fuel prices rising, Escalade volume tumbled 23%, year-over-year, to 2449 units. Two months later, in October 2005, with fuel shortages front of mind, the Escalade joined its full-size platform partners at General Motors in falling further and faster, sliding 49% to only 1504 units. October 2005 sales of the Lincoln Navigator plunged 53%, the Lexus LX470 slumped 36%, and the Hummer H2 fell 54%.

It’s not simply that buyers of expensive SUVs in 2005 lacked the money to pay the higher prices or put up with the same fuel shortages. The image of conspicuous consumption worsened, as well.

Yet a decade after that fuel crisis, our thorough fuel economy test of a more powerful, heavier Escalade resulted in a 26% decrease in fuel consumption. Our results should not turn out to be an anomaly, either. The EPA expects 17 mpg in combined driving. We saw 17.6 mpg.

WHAT IS IT?
This is the second model year for the fourth-generation Cadillac Escalade. The first-generation was a belated answer to the suddenly successful Lincoln Navigator, a Ford F-150/Ford Expedition-based full-size SUV. In first-gen form, the Escalade was only a thinly veiled GMC Yukon Denali, which like the F-150-based Navigator and Expedition pickup offshoots at Ford MoCo, used a full-size pickup truck platform, as well: GMT400.

The third-generation Escalade was by far the most stylistically differentiated yet, but it arrived just in time for an industry-wide meltdown, and following post-Katrina fuel price spikes.

Our GM Canada-supplied MY2016 test Escalade is a top-tier example, not the standard Escalade, not an Escalade Luxury, not an Escalade Premium. This is a 2016 Cadillac Escalade Platinum with one option, $1920 power retractable running boards which do their best to attach salt and slush to your pant legs.

HOW BIG IS IT?
Put it this way: the numbers are far larger than the vehicle feels when being piloted on city streets or rural roads. At 203.9 inches from bumper to bumper, the 2016 Escalade is 11 inches longer than the Honda Accord we drove last week, a significant sum to be sure, but not so much as to make the Escalade at all unmanageable. Width is a greater factor, of course, with door-to-door dimensions stretching nearly eight inches farther across than that Accord. Parking downtown? Don’t be surprised if the width, not the length, is your more problematic dimension. 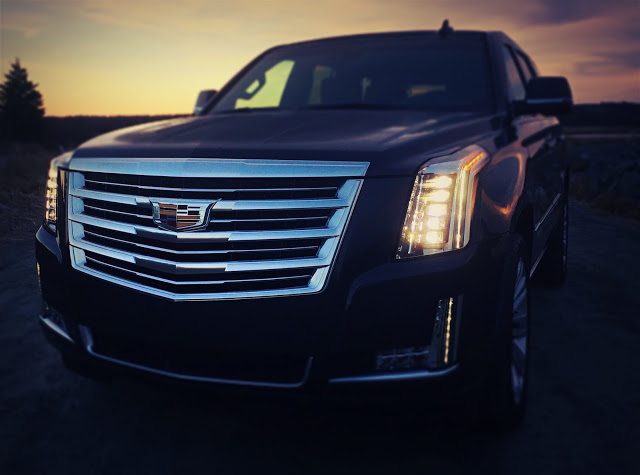 In contrast with Cadillac’s longer Escalade, the ESV, this regular-wheelbase ‘Slade is 20.4 inches shorter from stem to stern. Though the “smaller” Escalade, with a wheelbase of 116 inches and not 130, is thus the more maneuverable SUV, there are obvious sacrifices. Third row legroom is down by 9.7 inches, and cargo volume behind the third row – rather uselessly shaped and totalling only 430 litres in the Escalade – is down 61% compared with the ESV.

Expecting space for a large family? Don’t. The regular-wheelbase Escalade is spacious up front, adequate in the second row, snug in the third row, and entirely insufficient for a seven-person road trip’s worth of luggage behind the third row.

The 2016 Cadillac Escalade looks gigantic from the outside. Fortunately, it doesn’t feel gigantic to drive. Unfortunately, it’s not gigantic inside.

DOES IT WORK?
Even by the standards of Cadillac’s most expensive product, this Escalade is an especially pricey, especially sumptuous Escalade. Material quality soars in this high-spec Platinum trim. Scarce is the piece of luxury equipment that’s not present in this $106,190 example.

The driver’s seat offers three massage settings with three different strengths and adjustable bolstering for your sides and shoulder blades. Centre console storage areas appear with a smooth slide of a wood-slathered cover. The gauge cluster is a technological work of art. Rear seats fold at the press of a button. Running boards glide out to meet you upon approach. Leather and suede are everywhere. 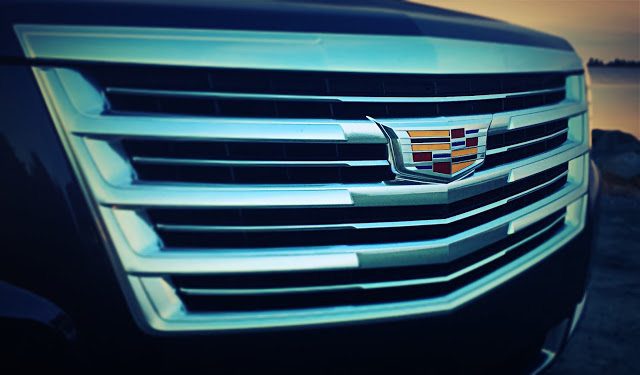 The Escalade’s interior is not a masterpiece, however, nor is it always ergonomically sensible. As automakers attempt to differentiate themselves from one another and position their vehicles further upmarket, too many “solutions” are little more than gimmicky inconveniences. Cadillac goes without depressable buttons for much of the Escalade’s dashboard. The smooth finish looks cool – at first – but becomes increasingly frustrating and ever more decorated with smudges. Cadillac’s CUE infotainment interface is decidedly quick, quicker now than it was, but CUE remains unnecessarily convoluted.

Fortunately, the 2016 Escalade features Apple CarPlay, and just as we heaped praise upon CarPlay in our Accord review last week, here too it is a blessing. Honda’s built-in system is not among the best, just like Cadillac’s. Masking most CUE issues with Apple sensibility is a gift from Cupertino.

Nevertheless, while Apple CarPlay reduces frustration, the Escalade’s greatest feature is found under the hood. The same 6.2L V8 which impressed us a year ago in the GMC Yukon Denali is paired here to GM’s 8-speed automatic, not the old 6-speed that’s no longer a part of the Yukon Denali portfolio, either. As a result, the Escalade goes from simply quick to  soul-stirringly quick. And rather than feeling hampered by a transmission that didn’t want to let the burbly 420-horsepower 6.2L out to play, the 8-speed is a willing partner. No, it’s not as intelligent and consistently swift to engage as the 8-speed/EcoDiesel combo in the Ram 1500 we tested last month, but this 8-speed is a smart cookie, and it makes the Escalade adequately efficient.

With this much power, acceleration from rest to highway speed takes less than six seconds. And with this much pace and 5000+ pounds being carted around, an automaker has a responsibility to make a vehicle handle with some level of sprightliness. The Escalade is no Cadillac SRX, let alone a Porsche Macan, let alone a Porsche 911.  It’s not a performance SUV, regardless of its accelerative capability. But the Escalade’s steering is decently quick and it remains surprisingly level in corners, reacting appropriately to sudden inputs.

Brake feel is terrific, though braking performance leaves something to be desired. If there is one key dynamic shortfall, it’s the magnetic ride control’s inability to match the Escalade’s surprisingly positive handling with Cadillac-like ride quality. The Escalade, however, is always working to manage the bumps and dips and grooves and holes in the road, busily attempting to create the sensation in your posterior of a serene experience. Sure, it’s a wonderfully isolated experience aurally. But Cadillac needs to find a way to match the Escalade’s satisfactorily nimble behaviour with a smoother ride, or sacrifice some of the responsiveness.

IS ANYONE BUYING IT?
Escalade popularity in Cadillac’s home market is on the rise in 2015, but the big brute hasn’t bullied its way back into the hearts of 35,000+ annual U.S. buyers like it consistently did a decade ago. (Those figures don’t include the long-wheelbase Escalade ESV.)

2015 is nevertheless on track to be the highest-volume U.S. sales year for the regular-wheelbase Escalade since 2008.

In Canada, where the market for full-size SUVs is much smaller, Cadillac has already sold far more Escalades in 2015’s first 11 months than in any prior calendar year in our records. (The Escalade launched in 1998 – our records begin in 2004, two years prior to the Escalade’s U.S. sales peak.) Of the 8242 full-size SUVs sold across six nameplates by GM Canada in 2015’s first 11 months, 18% were Escalades; another 5% were Escalade ESVs.

SHOULD I BUY SOMETHING ELSE INSTEAD?
If you want a more pleasing driving experience, the Mercedes-Benz GL-Class (soon to be renamed GLS-Class so it can sound like a Hyundai Elantra trim level) is available with a range of powerplants, but it may look slightly soccer mommy. The Land Rover Range Rover is the next most obvious candidate, particularly if interior appointments are a high priority. But the Range Rover only seats five and pricing starts where the Escalade ends.

HOW MUCH SHOULD I PAY?
If you want your Escalade to look and feel like a genuinely premium Escalade, you’ll have to ignore the fact that pricing begins in the $80s and reach instead for the Escalade in Platinum trim. This is where the suede headliner, leather-wrapped instrument panels and console and doors, massaging seats, and seat-mounted DVD players come into play. GM Canada’s 2016 Escalade Platinum starts at $104,270. We’d skip the $1920 power-retractable running boards of our Escalade tester, but optional 22″ 6-spoke wheels to replace the overly traditional 22″ wheels on the pictured Escalade, at $2095, would make a difference. That’s a $106,765 Escalade. Which is a lot. But it’s a couple grand less costly than the Mercedes-Benz GL550 with driving assistance and towing packages. 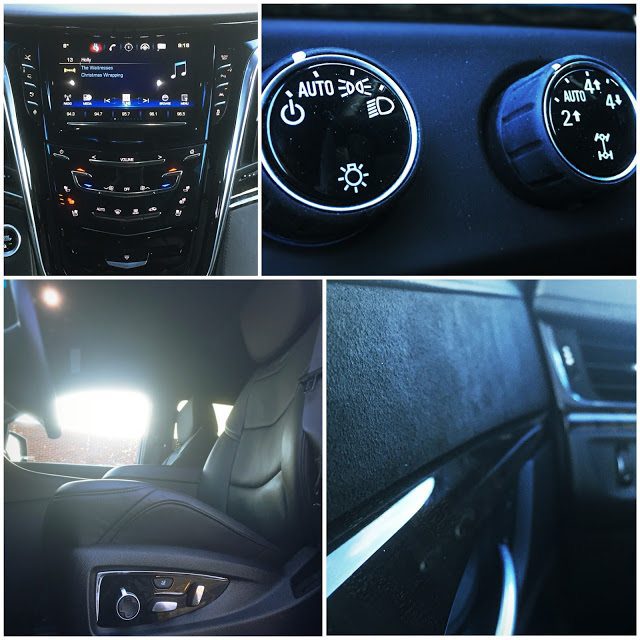 WHAT’S THE VERDICT?
Forget the BMW M3-fighting ATS-V. Don’t even bother thinking about the Volt-based ELR. The CTS VSport we praised two summers ago? The brand’s best-selling model, the SRX?

No, those are not the vehicles which define Cadillac at the end of 2015.

The Escalade is Cadillac. Indeed, the Escalade is the vehicle which most adequately defines Detroit luxury on the whole in the modern era. And with the Star Spangled Banner as the proverbial backdrop, the Escalade succeeds.

But even those demerits don’t alter the fact that the Escalade is a hugely desirable statement maker, an obviously premium answer to a distinctly European question: can Detroit do luxury?

Yes. Albeit in a strikingly different form than Detroit utilized fifty years ago.

Timothy Cain is the founder of GoodCarBadCar.net, which obsesses over the free and frequent publication of U.S. and Canadian auto sales figures. Follow on Twitter @goodcarbadcar and on Facebook. The Escalade was supplied by GM Canada’s press office.