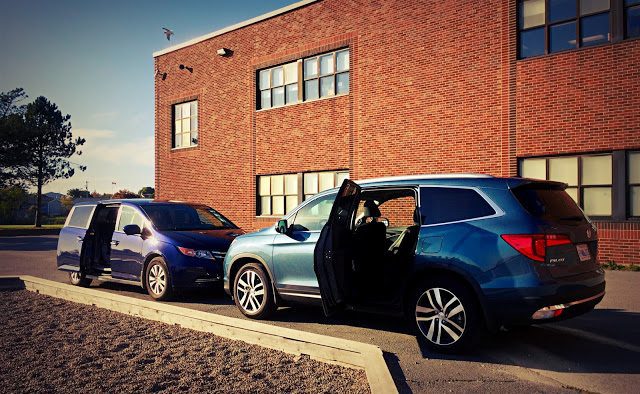 Fuel mileage in our 2015 Honda Odyssey decreased noticeably in October as an inordinate amount of time in the van was spent sitting in traffic, travelling zero miles per gallon; consuming an infinite number of litres per 100 kilometres of nonexistent driving.

After averaging 9.7 L/100km through the first three months with our long-term Odyssey EX, we averaged 10.7 L/100km in October.

October also presented us with an opportunity to test a third-generation 2016 Honda Pilot, the only other Honda with three rows of seating.

While we’d like our Odyssey to be as structurally stiff as the Pilot and be fitted, optionally, with the Pilot’s grippy 20-inch tires, the electronic gremlins of the Pilot and lack of sliding doors made the verdict in our impromptu comparison test a simple one. Not only does the Odyssey create more space in its cabin, it’s also the far less expensive vehicle.

Following the Pilot’s departure from our driveway, plummeting temperatures and small snowfalls in other parts of Nova Scotia made it clear that it was time to switch our all-season Michelin Primacy MXV4s for winter tires prior to the first storm.

After running our previous vehicle on black steel wheels through the winter, we decided this year that the steels had to go. This meant spending extra money to take our winter tires off the steel wheels, the all-seasons off the alloys, and have the winters installed on the alloys and placed back on the vehicle.

After calling around for a few quotes, being very thorough to make sure the tire shops new that this wasn’t a simple swap, I was shocked to find that our local Honda dealer offered the service for $5.00 less than any of the tire shops I called. So surprised was I, in fact, that I confirmed with the appointment coordinator, stating again that I needed winter tires removed from steel wheels and placed on the Odyssey’s alloys.

But when Steffani returned home from the dealer, the cost was 94% higher than the quote we received. She didn’t have time to battle it out with the service desk, and she wasn’t the one who had originally spoken with them, either. But the receipt included a cover page from the service manager saying, “If you don’t feel our service was a 10 out of 10, please contact me.”

In the end, what would have been a very poor review of Portland Street Honda – a place where I was once temporarily employed more than a decade ago but not the dealer from which we acquired our Odyssey – turned into an immensely positive review. It was clear to the immensely polite service manager that we had been promised a much lower price – after all, who would go to the dealer to have a winter tire installation perform if tire shops were willing to do the same thing for $79.99, not $145.45?

The conversation was a brief one, we were credited back the extra money above and beyond the original $74.95 quote, and Portland Street Honda turned a potentially negative experience into a very positive one. Note: only after the discussion of the rebate was completed did I reveal to the service manager the field in which I’m employed.