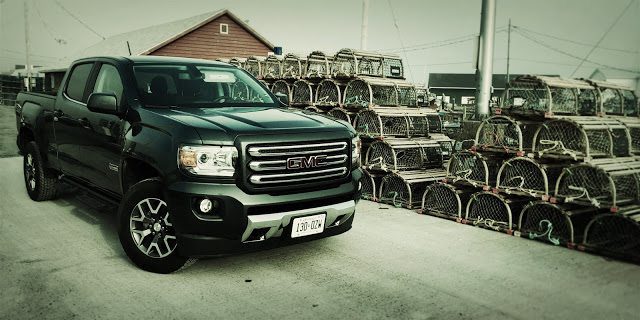 The 2015 GMC Canyon, however, was reintroduced along with its Chevrolet Colorado twin as an all-new design last autumn. Besides the badge, there is no mechanical, architectural, or design link between this and the first-generation Canyon, which was a successor to the GMC Sonoma.

A number of rivals that existed during the last GMC Canyon’s tenure, from the Ford Ranger to the Dodge Dakota and Suzuki Equator, have vacated the North American market. GM now takes the “midsize” truck fight to the Nissan Frontier and the best-selling Toyota Tacoma.

To that fight, the GMC Canyon brings a level of horsepower and refinement that have never before been seen in the category. Yet statistically speaking, you’re unlikely to buy one. The five best-selling trucks in Canada are full-size pickups. Those five trucks, along with the rare Nissan  Titan, account for 93% of all Canadian truck sales. 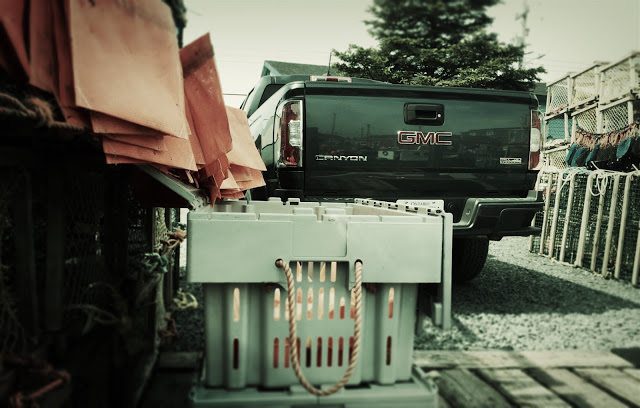 WHAT IS IT?
Like the Colorado, the Canyon is available with four and six-cylinder powerplants, rear or four-wheel-drive, and extended or crew cabs. Our test truck was a four-wheel-drive crew cab in mid-grade SLE trim. Instead of the short, five-foot-two-inch bed of ordinary four-door Canyons, ours had the longer 6’2″ bed from the extended cab model.

Thus, rather than the 128.3-inch wheelbase of other crew cabs and all extended cabs, the Canyon you see here sat atop a lengthy 140.5-inch wheelbase.

Canyon payload ranges from 1470 (in our tester) to 1620 pounds. Unlike many of the four-wheel-drive systems you’ll find on the latest full-size pickups, there is no all-wheel-drive-aping Auto setting in the Canyon. 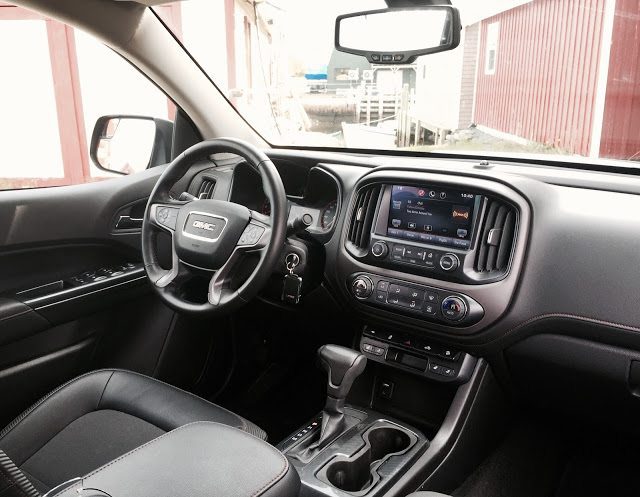 HOW BIG IS IT?
“Small” is not a word one would use to describe a long-box crew cab Canyon, not after seeing it fill a driveway. (“Midsize” is also something of a misnomer given that there is no class of truck smaller than the Canyon/Colorado/Frontier/Tacoma in the U.S. or Canada.)

But the Canyon is noticeably smaller than a crew cab GMC Sierra with the Sierra’s longer 6’5″ bed option: 14.6 inches shorter from bumper to bumper, and more meaningfully, half a foot narrower from starboard to port. As for the four-door, long-box Toyota Tacoma, this long-box Canyon is 3.7 inches longer and a few tenths of an inch narrower. With a virtually identical wheelbase, the Canyon offers 3.2 inches of extra rear leg room.

DOES IT WORK?
You better believe it works. It’s a truck, so you assume it’ll tow and haul and go over things. Indeed, the Canyon tows and hauls and goes over things, despite a front air dam that’ll need removing if you want to go over more things.

Yet that which separates the Canyon (and do we need to keep saying it, the Canyon’s Colorado twin?) from its key rivals isn’t its all-around traditional pickup truck capabilities but rather the Canyon’s muted and comfortable interior, its excellent ride quality, its properly weighted and relatively precise steering, its surprisingly even-keeled handling, and its nicely modulated brakes.

Don’t let praise for the Canyon’s car-likeness reduce its reputation for rugged toughness – it is in these venues that modern full-size pickup trucks have similarly made such rapid progress while also increasing towing capacity and payload, improving fuel economy, and adding power.

The new Canyon is doing the same thing the F-150, Sierra, Silverado, and Ram have already done, only in a noticeably smaller package. Somewhat smaller. Moderately smaller. Okay, marginally smaller.

Undoubtedly, the Toyota Tacoma (and Nissan Frontier) will feel like the truckier truck, and it’ll likely still feel that way after we drive the revamped 2016 model. Yet with so many of us now using our trucks as commuter cars, as minivans, and as primary vehicles, how can we ignore the Canyon’s superior control layout, seats and seating position? Are we supposed to set aside the fact that the 3.6L is far happier to rev than the Tacoma’s outgoing 4.0L V6 and that the reduction in cabin noise greatly reduces driver fatigue on longer journeys because the Canyon is too good at too many things?

From a daily driver’s perspective, there is simply no comparison, not until Honda’s next Ridgeline arrives. For truck users, the Tacoma’s appeal relates as much to its capabilities as it does to the Toyota’s legendary reliability, and that appeal is neither irrational nor without merit.

IS ANYONE BUYING IT?
Yes, and no. In comparison to the GMC and Chevrolet brands’ own full-size pickup trucks, Canadians buy just one Canyon and Colorado for every nine Sierras and Silverados. But with 4104 total sales in the first five months of 2015, the GM midsize twins aren’t unheard-of, outselling common vehicles like the Nissan Pathfinder, Subaru XV Crosstrek, BMW 3-Series and, yes, the Tacoma, too.

Supply remains an issue. General Motors is selling the trucks rather quickly once they arrive at dealers. That doesn’t mean demand is necessarily high, as the much greater market share afforded to full-size trucks can attest. But it does mean demand is at least as great as supply, if not greater. Thus, a buyer’s search to find the truck he or she wants can often be stymied, which either sends the buyer to Toyota, Nissan, the used market, or a new full-size truck.

SHOULD YOU BUY SOMETHING ELSE INSTEAD?
During the majority of our time with the Canyon, we drove around the city of Halifax, Nova Scotia. For a large chunk of that time, we kept the Canyon in the downtown core. Halifax is one of North America’s oldest cities. That means narrow streets; oddly-shaped parking lots; and hilly, low-visibility intersections.

Of course, these geographic features could’ve been handled in a full-size pickup truck – look around, everybody’s doin’ it. But even with the full-size-like length of the Canyon, the GMC’s more city friendly overall dimensions (and especially its narrower width) meant I didn’t have to think about maneuvers in compact parking lots. I didn’t have to think about squeezing between illegally parked cars on either side of a narrow one-way street.

Put it this way. The Ford F-150 SVT Raptor you want so badly because it reportedly counteracts the paltry circumference of your brachium? It’s a full foot wider than the Canyon. Do the math: that’s six inches of extra body on either side of the truck.

HOW MUCH SHOULD YOU PAY?
Still, it seems silly to leave a dealer having paid the same (or more!) for a Canyon than a Sierra or any other full-size truck, even if the Canyon has more options fitted, even if it is more maneuverable. It’s not that much more efficient either. And a small pickup truck with leather seating and automatic climate control almost seems out of place, doesn’t it?

In our books, the ideal Canyon is an extended cab model. The crew cab simply doesn’t offer enough space, and certainly not enough underseat storage, to justify the near-full-size length of the vehicle or to be used as a family vehicle in the way an F-150 SuperCrew can. This is the rear seat of a compact car: adequate but not expansive.

Pay a little less than that and you’ve got yourself an exceptional truck. This isn’t the first time we’ve said so. We named the modestly more attractive Chevrolet Colorado version to our annual Good 12 this past Christmas, the only pickup truck to crack the list.