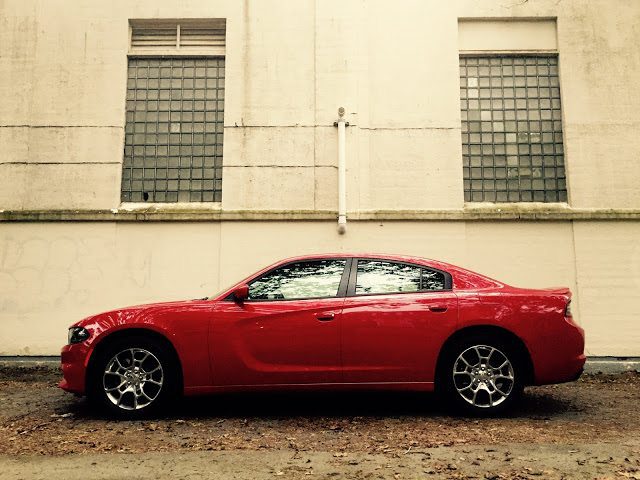 Since this site’s inception in 2007, we have revealed our Good 12 each and every year on or around Christmas Day.

This past Christmas, the Dodge Charger was on that list. At the time, we said it’s crazy that the car is even legal.

Oh, not this Charger. We were talking about the Dodge Charger SRT Hellcat, a version of last week’s GCBC test car which churns 136% more horsepower through half as many wheels.

WHAT IS IT?
Using architecture from Mercedes-Benz’s W211 E-Class, albeit thoroughly evolved since the Charger debuted in 2006, the 2015 Charger is Dodge’s restyled take on the classic American full-size sedan. Assembled in Brampton, Ontario, alongside its Chrysler 300 fraternal twin and its Dodge Challenger coupe offspring, the latest Charger is available with four different engines, rear or all-wheel-drive, and a vast array of trim levels.

Our test car is equipped with the basic 3.6L Pentastar V6 engine and all-wheel-drive. AWD is a $1900-$2,200 option now available only on V6 cars. The SXT trim is a $3,100 jump up from the basic SE. In order to drive a Charger with Fiat Chrysler Automobiles’ 5.7L Hemi V8, you must forgo all-wheel-drive and spend $1,405 extra, compared with the rear-wheel-drive SXT Plus, to stretch to the R/T.

In addition to bumping up the trim level and adding all-wheel-drive, our car was also equipped with a $5,295 AWD Premium Group (power tilt/telescope wheel, cooled front seats, navigation, a bunch of extra safety features, heated rear seats, and a number of other trinkets), the bizarrely overpriced $1,395 black painted roof, $300 paint, and a $495 Rallye Group that upgrades wheels and tires, includes the R/T’s more aggressive front styling, and adds eight more horsepower and four more pounds-feet of torque.

HOW BIG IS IT?
It’s vast on the outside and not as gigantic as you’d hope on the inside, but in motion, the Charger doesn’t feel even remotely as large to pilot as its dimensions suggest. The Charger is six inches longer, slightly more than one inch wider, and no taller than FCA’s midsize sedan, the Chrysler 200. This doesn’t say nearly as much about the tidy dimensions of the Charger as it does about the largesse of modern midsize cars.

As a result, one of the key factors for considering a full-size car like the Charger, passenger space, is eliminated. Not only is rear legroom unimpressive – acceptable, but unimpressive – there’s also a massive centre hump on the floor under which power is sent to the rear wheels. Thus, even though there’s proper full-size width for three across, passengers aren’t blessed with the kind of space they’d enjoy in a Toyota Camry, America’s best-selling car and Canada’s best-selling midsize car. Moreover, the Charger’s child seat hookups, both beneath the seats and behind the headrest, were seemingly designed by someone who hoped they would never need to be latched or tethered.

In terms of cargo space, the 2015 Dodge Charger’s trunk is more than capable of carrying a big load. But again, in an age where consumers desire increased practicality, similar money buys a Jeep Grand Cherokee with more than twice the space behind the rear seats. FCA Canada sells twice as many Grand Cherokees as Chargers. Is cargo volume the only reason? Hardly. But the Charger’s inability to wholly succeed as a family car when the car fills so much of my driveway is the main reason I didn’t fall head over heels last week.

Then again, so too is the ride quality of most of the Charger’s direct rivals. Impala, Cadenza, Taurus, Avalon: these are all cars which excel at cosseting. The Charger nevertheless sets itself apart with a dose of surprising athleticism, even in this non-Sporting example. A Charger SRT this is not, but the Charger SXT Rallye’s quick steering, planted attitude in corners, and very capable V6 engine aid the big sedan in providing owners with a best of both worlds scenario.

The Charger isn’t a sports sedan, of course. It’s not the nimble pocket rocket we’re driving this week: Subaru’s WRX. But the Charger’s knack for walking a fine line is admirable. Dodge has produced a car that’s far from one dimensional. Luxury without the pretense, athleticism without aggression, comfort without coddling.

Even the interior, though let down by a squeaky shifter and a flimsy wiper/signal stalk and some rattles at the base of the rear windshield, is a massive upgrade compared with prior Chargers. Sharply criticized for cheap cabins since returning a decade ago, the Charger now feels worth the asking price. 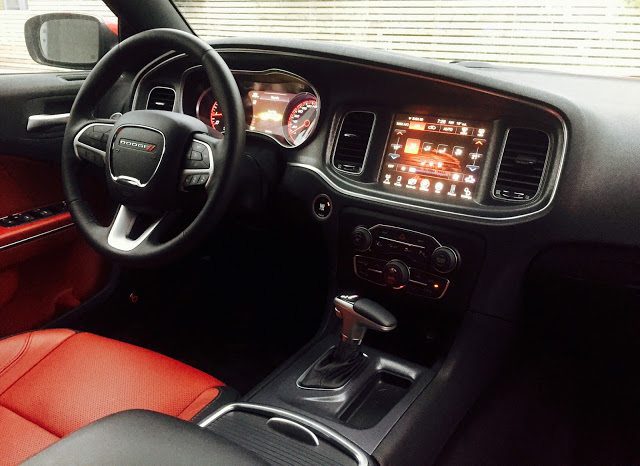 IS ANYONE BUYING IT?
As consumers turn away from cars toward SUVs and crossovers, traditional sedans are paying a high price.  In the United States, where Charger sales are 17 times stronger than in Canada, the big Dodge is on track for 2015 sales to fall to a three-year low. North of the border, full-size cars weren’t big players even before the post-recession turn to utility vehicles. Canadian Charger volume is up, year-over-year, but the car will still fall well short of its 2007 peak, when 7,858 copies were registered. Dodge could top the 5K mark in 2015, however, a figure not seen since 2008.

SHOULD I BUY SOMETHING ELSE INSTEAD?
Not every buyer has converted to an SUV mindset – plenty of Canadians are still spending more than $45,000 on sedans. Those sedans, however, aren’t volume brand machines; they’re luxury cars from Germany and Japan.

To head that direction, however, requires sacrifice, not just in terms of equipment but in terms of space. Regardless, for greater luxury but less space and similar outright pace, consider a Mercedes-Benz C300 4Matic.

Hyundai’s Genesis 3.8 Luxury sedan comes in just under $50K, majors on space and content, and holds its own on a twisty road.

Chrysler’s 300, however, is the most obvious alternative. With all of the Charger’s unseen bits but with higher-class style, the 300 is the FCA big car that doesn’t look like you’re driving a rental or an undercover police car.

HOW MUCH SHOULD I PAY?
Dodge sedans with V6 engines at $48,075 aren’t chock full of mainstream appeal. As a luxury car with a luxury car price tag, the Charger nameplate is overreaching, even if it does live up to the price tag.

Above $40,000, a Charger needs a V8 in order to make a name for itself. Unfortunately, for MY2015 forward, that means all-wheel-drive is unavailable.

The bigger problem with paying for a Charger in Canada won’t be establishing an acceptable price point, but rather finding the car. FCA Canada sells fewer than 500 Chargers per month – fewer than 200 per month this summer – and many of those cars are heading directly to airport rental fleets and RCMP speed traps.

WHAT’S THE VERDICT?
As a family car in 2015, the Charger doesn’t hit all its marks. As a desirable machine, on the other hand, the Charger is a noteworthy new car. It’s not just another version of a tired theme, because the Charger doesn’t feel like other full-size sedans. The driving position is different. The ride and handling are different. The way the engine and transmission work seamlessly together to aid in faster than expected progress? Different.

From the Taurus and Impala to the Avalon and the Cadenza, there are too many unifying characteristics. The Dodge’s whole ambience causes the Charger to emerge from the pack.

Timothy Cain is the founder of GoodCarBadCar.net, which obsesses over the free and frequent publication of U.S. and Canadian auto sales figures. Follow on Twitter @goodcarbadcar and on Facebook. The Charger was supplied by FCA Canada’s press office.