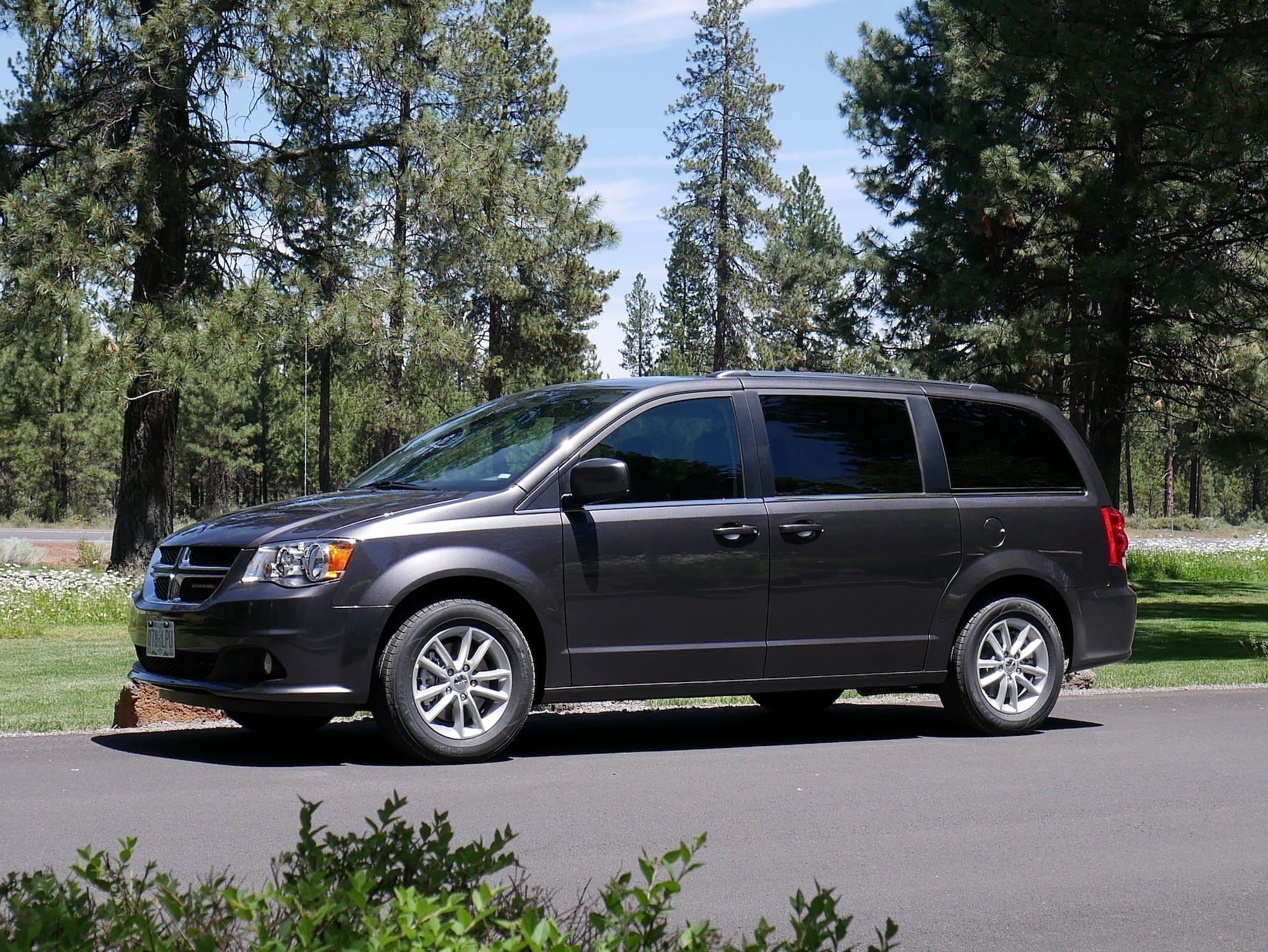 Dodge created the progenitor to the modern-day minivan back in the 1980s. That design has evolved over time with newer and newer generations. However, today it has one of the oldest minivan designs on sale. The 2019 Dodge Grand Caravan that I drove is a decade-old design. That doesn’t stop it from being an important model.

Honda, Toyota, Kia, and Chrysler all have newer designs, but the Dodge Grand Caravan sells far greater than any of them. Much of that goes to fleets, but it doesn’t change the fact that the Grand Caravan sells pretty well. The model’s sales are down this year by quite a lot, but in terms of overall volume, it’s the clear winner in the segment.

To find out why I decided to take the vehicle on a nice spin around Oregon. I had the chance to go out that way for a Chevrolet Silverado Diesel and Silverado HD drive. What I found surprised me—a more than decade-old design still delivers. 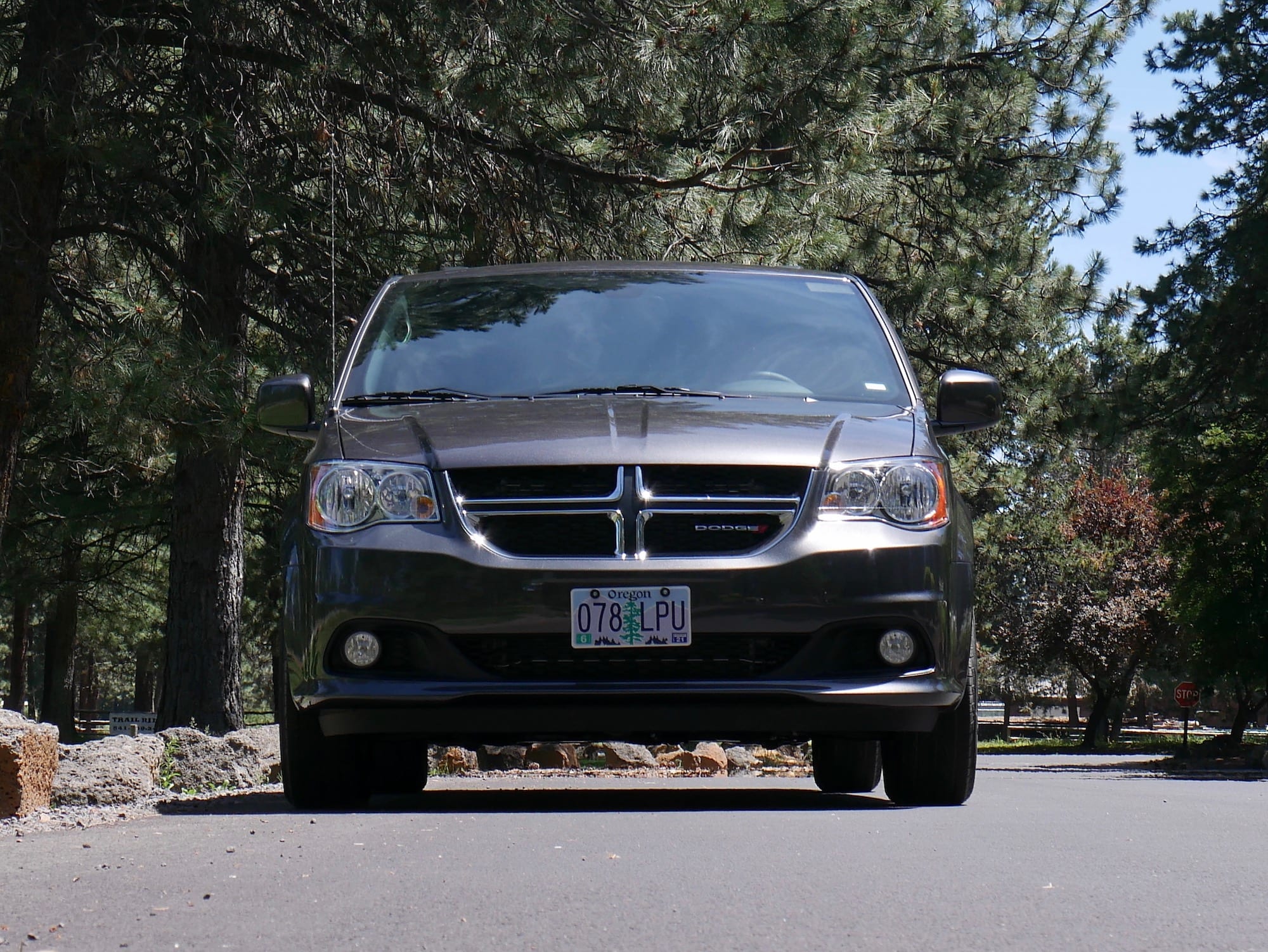 The Dodge Grand Caravan is the value proposition in the minivan segment. It offers all of the minivan essentials, like power sliding doors and a rear power liftgate as well as a generous storage area and plenty of interior room for a price lower than the competition.

While the Grand Caravan might be the value proposition in the segment and lacks some of the features and amenities of its competition, it still manages to deliver a good experience. There’s plenty of room inside the cabin, the powertrain is proven after years of use, and the cargo area will let you do everything you need or want to do with a minivan. 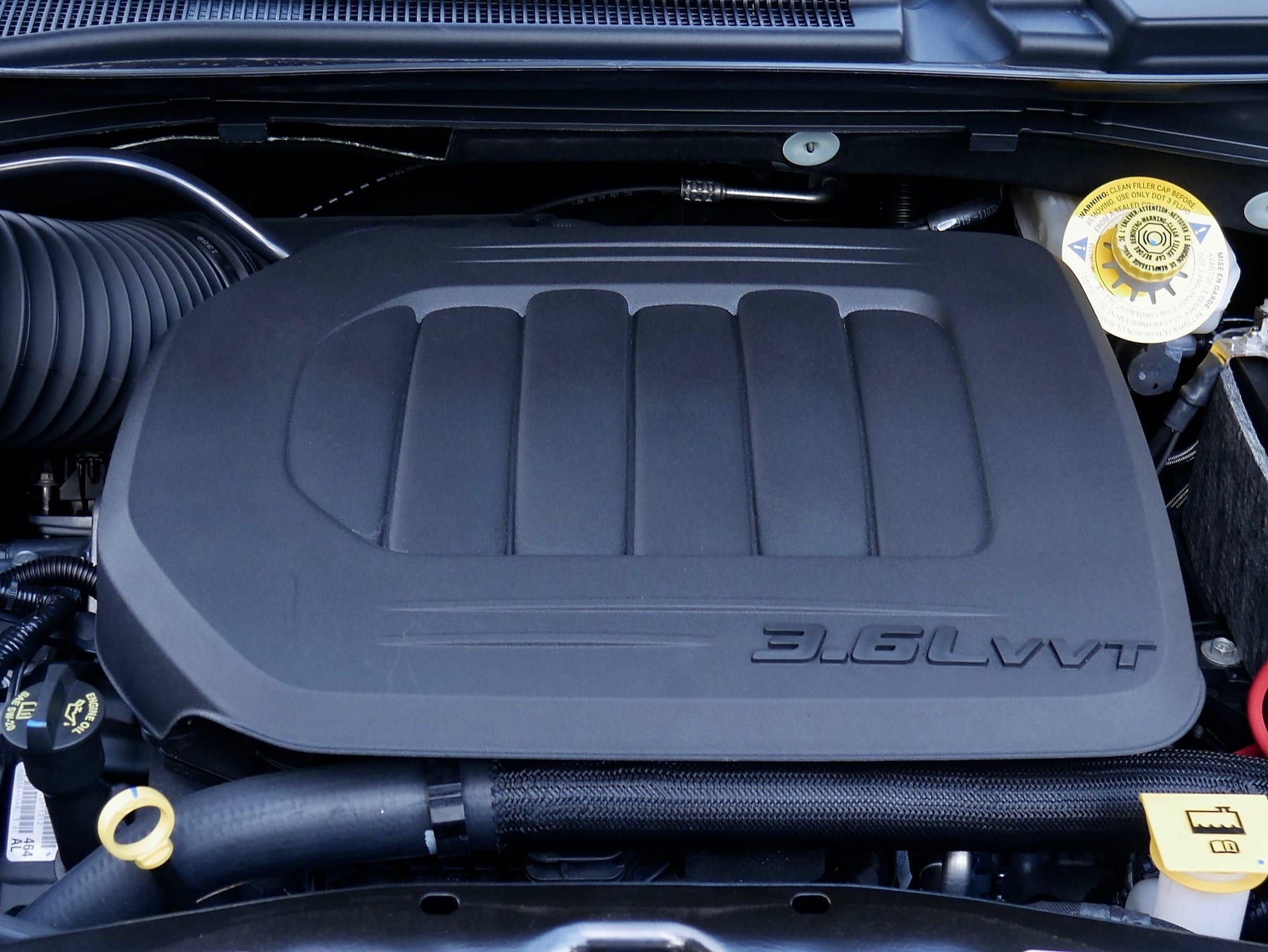 Under the hood of the Grand Caravan is FCA’s venerable 3.6-liter V6 engine. In the Grand Caravan, it produces 283 hp and 260 lb-ft of torque. This engine is used in all sorts of vehicles across Dodge’s lineup and in FCA’s other brands. It’s a great engine, albeit nothing special.

The V6 makes the minivan capable of towing up to 3,600 lbs. The EPA has rated the V6 at 17 mpg city and 25 mpg highway. That’s certainly not segment-leading—Honda and Chrylser’s models do better—but it’s not wildly far off.

The engine moves the vehicle along perfectly fine. I drove the minivan in the mountains around Bend, Oregon. The six-speed automatic transmission did a fine job, but you’ll never mistake this powertrain for powerful – or the van for fast. It’s good for what it’s meant to do—move people around at reasonable speeds and cruise easily on the highway. 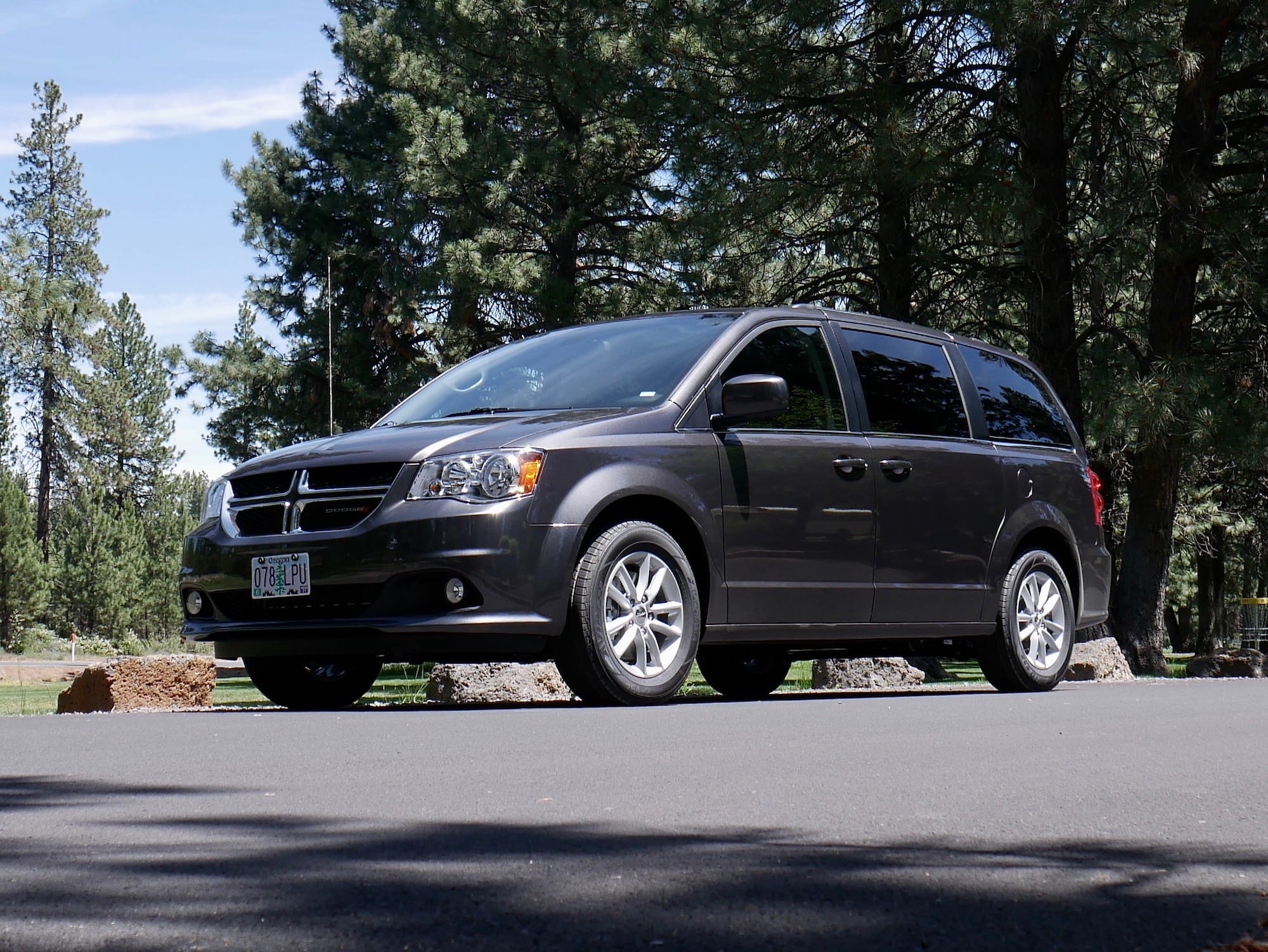 The minivan exterior has always been hard to pull off well. With that said, I think Dodge does a decent job with the Grand Caravan, especially considering the design is so old. There were updates to the design in 2011 and 2014, and these proved helpful towards keeping the Grand Caravan from going completely stale.

Dodge makes no bold style statements with the Grand Caravan. What you see is what you get. While Honda’s Odyssey has some interesting lines, the Grand Caravan is pretty simple. I actually prefer this. I know it’s a minivan. Don’t try to make it cool or make it look like something it’s not.

There’s not much to point to on the exterior of the vehicle that stands out. Dodge does a good job of keeping things vanilla. This is a smart move. Its lack of polarizing style means it’s a good middle of the road option. 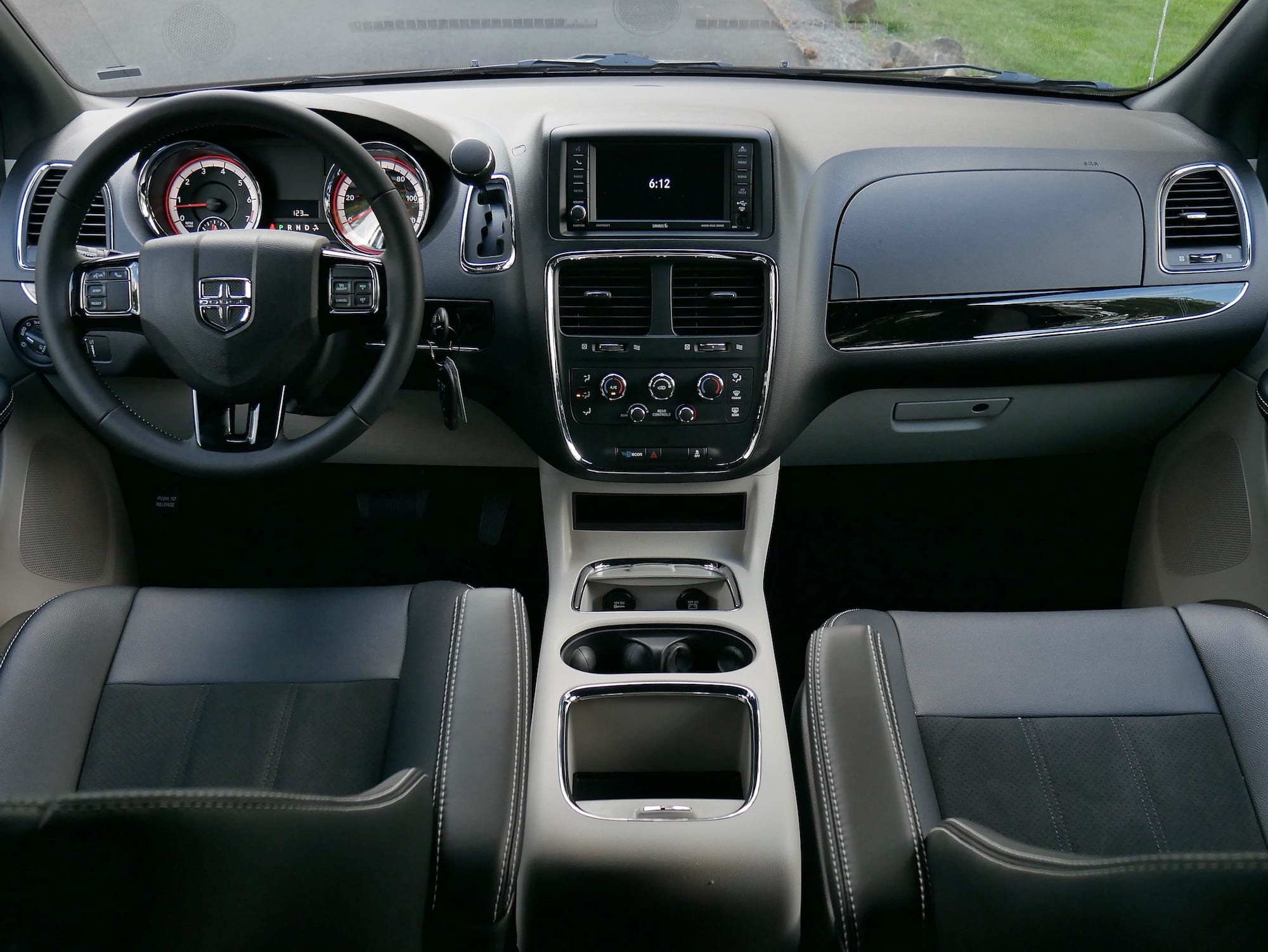 There’s a lot to complain about with the interior of the Dodge Grand Caravan. There are cheap plastics throughout the vehicle and the seats themselves could be a little comfier. They’re a little on the firm and flat side.

Overall, most of the vehicles I’ve driven in the last few years have felt and looked better. The interior of the Chrysler Pacifica is leaps and bounds better and the cabins of the Honda Odyssey and Toyota Sienna are far better, too.

That said, everything felt reasonably sturdy and ready for the rigors of minivan life. You won’t care about spills, people getting sick, or you kids kicking things. Yes, cleaning up is a pain, especially because there’s no handy built-in vacuum like in other minivans. However, you won’t be worried about all of the family caused grime and foodstuffs that come along. You’ll just hopefully dig out the shop vac once a month and do a good deep clean.

Other minivans do this kind of magic trick, too, but they cost a little more. It’s nice to know you can get this kind of wonderful functionality for a bargain price. 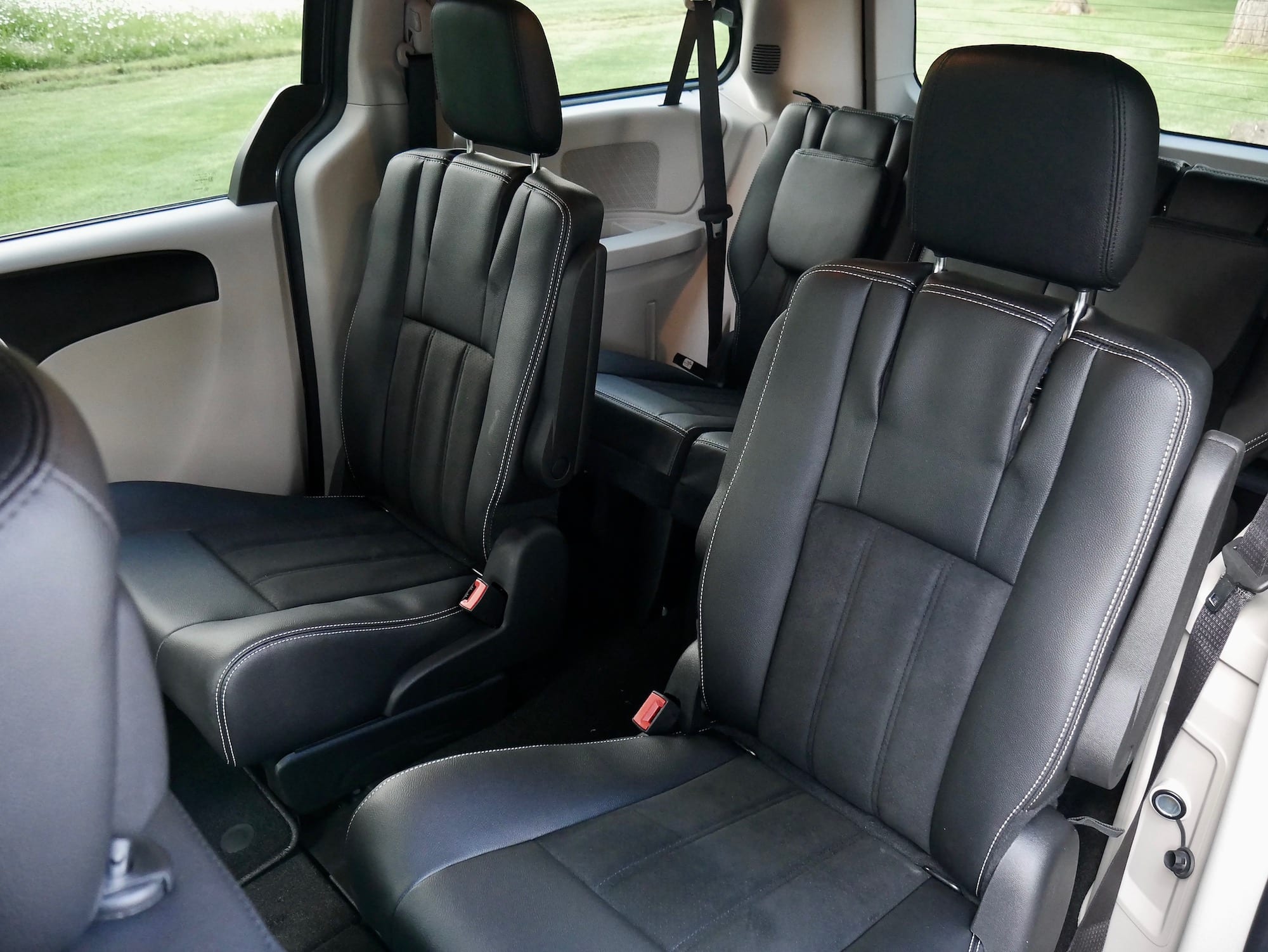 When it comes to technology, the Grand Caravan is way behind the curve. You get a 6.5-inch touchscreen with some buttons to either side and a couple of knobs. It’s easy to use but looks dated and lacks many advanced features its competitors have.

With that said, it does include satellite radio, Bluetooth, and navigation. You can also get a DVD player for the rear passengers that can also be used for gaming systems. All that sounds fine, but the vehicle lacks the copious USB ports, Apple CarPlay, Android Auto, and all the other goodies from other automakers. Again, content is limited when you go with a price this low. 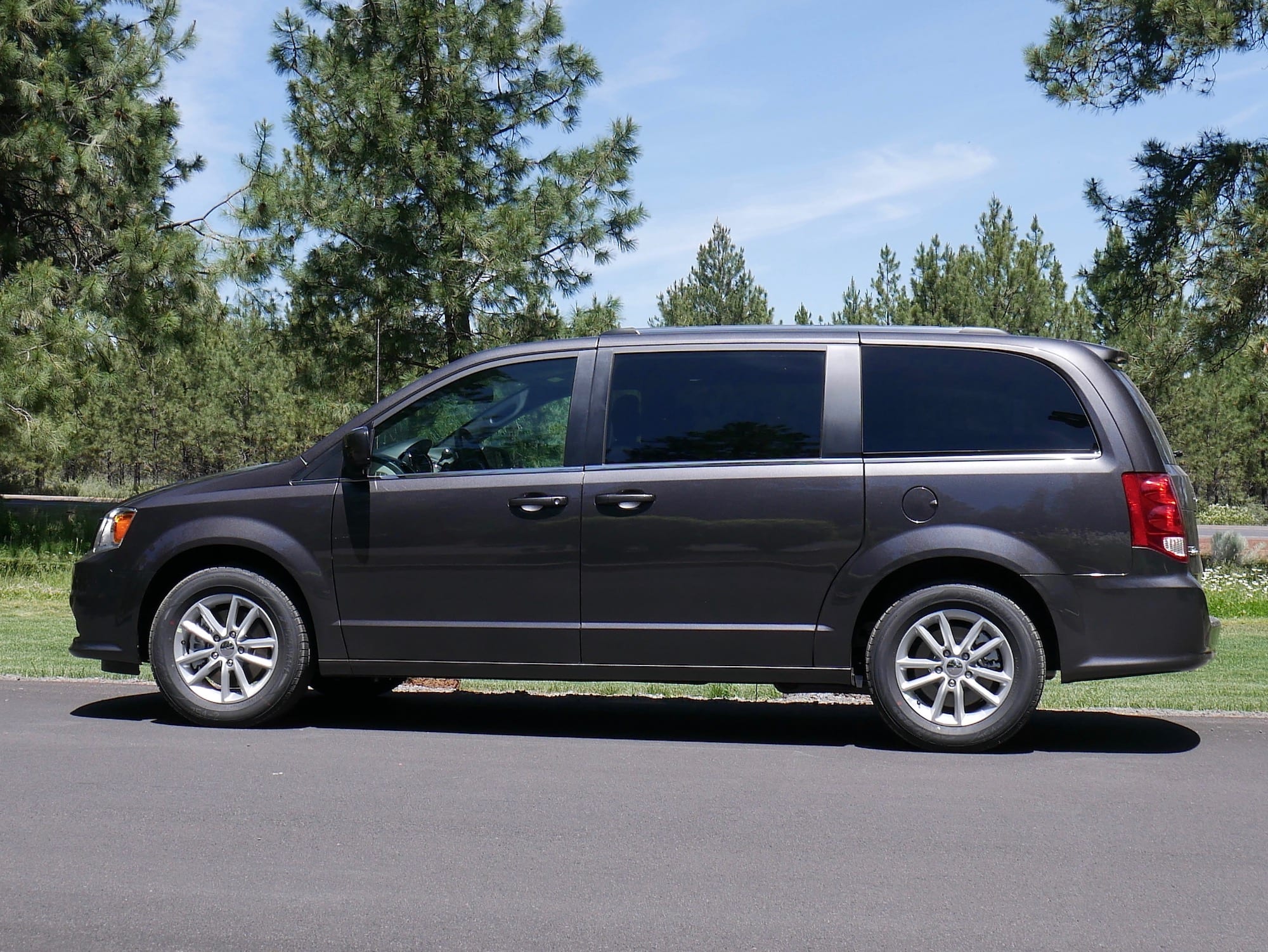 The Grand Caravan measures 202.8 inches long, 78.7 inches wide, and 68.9 inches high. When compared with the competition, the minivan is right on par. The Chrysler Pacifica is a little bit bigger, but only by an inch or so. The Honda Odyssey is about the same and the Kia Sedona and Toyota Sienna are actually a little bit smaller.

Inside, Dodge’s minivan provides 40.7 inches of legroom for the front row, 36.5 inches for the second row, and 32.7 inches in the third. The front row is on par with all of the competition, but the second row and third row don’t do as well. The Chrysler, Honda, Toyota, and Kia all do better in these areas. Some by a couple of inches others by a few. 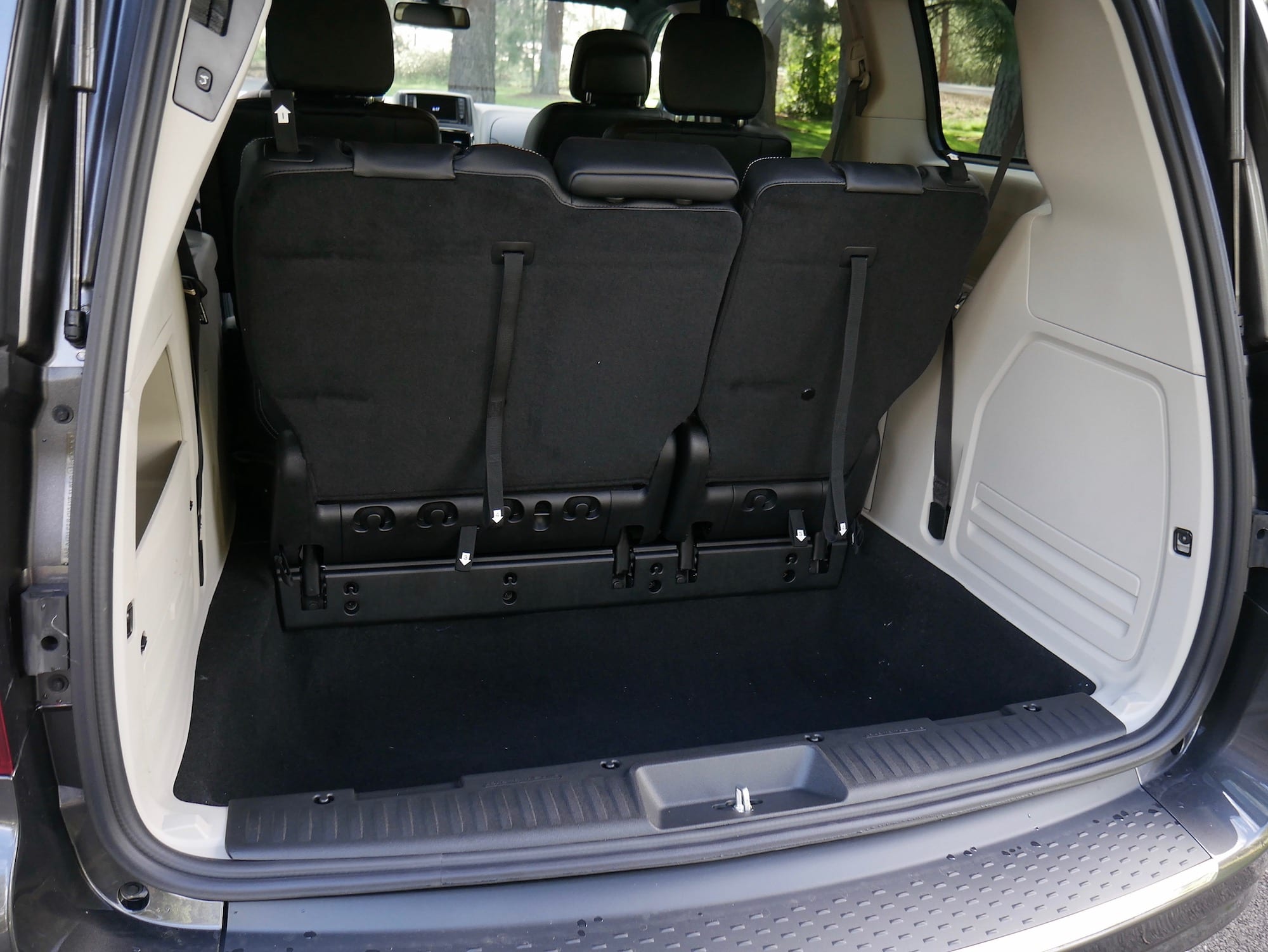 All of the Grand Caravan’s competitors do a better job but only by a few cubic feet at the most. In some cases, though, that can make all the difference. In a word, yes. The Dodge Grand Caravan gets the job done. It will move large families around with ease. There are power doors, seating for up to seven people, plenty of cargo room, and good storage in the cabin. The driver and front passenger have access to more cubbies and bins than they’ll likely know what to do with. I actually like the layout of the interior storage areas better than the Honda Odyssey and Toyota Sienna.

When you think about what a minivan must do at a minimum, the Dodge Grand Caravan delivers. However, there are some concerns.

First off, is the fact that the interior of the vehicle feels and looks cheap. I said it felt sturdy and ready to take on the rigors of family life above. I believe it would fare rather well. That said, I do worry about how it would hold up over many years of use. I think it would be good for about five years, mind you, but that’s a total guess.

With the average age of cars on the road creeping towards 12 years, according to USA Today, I worry that the Grand Caravan might not be up to a dozen years or more at the unforgiving hands of your children. 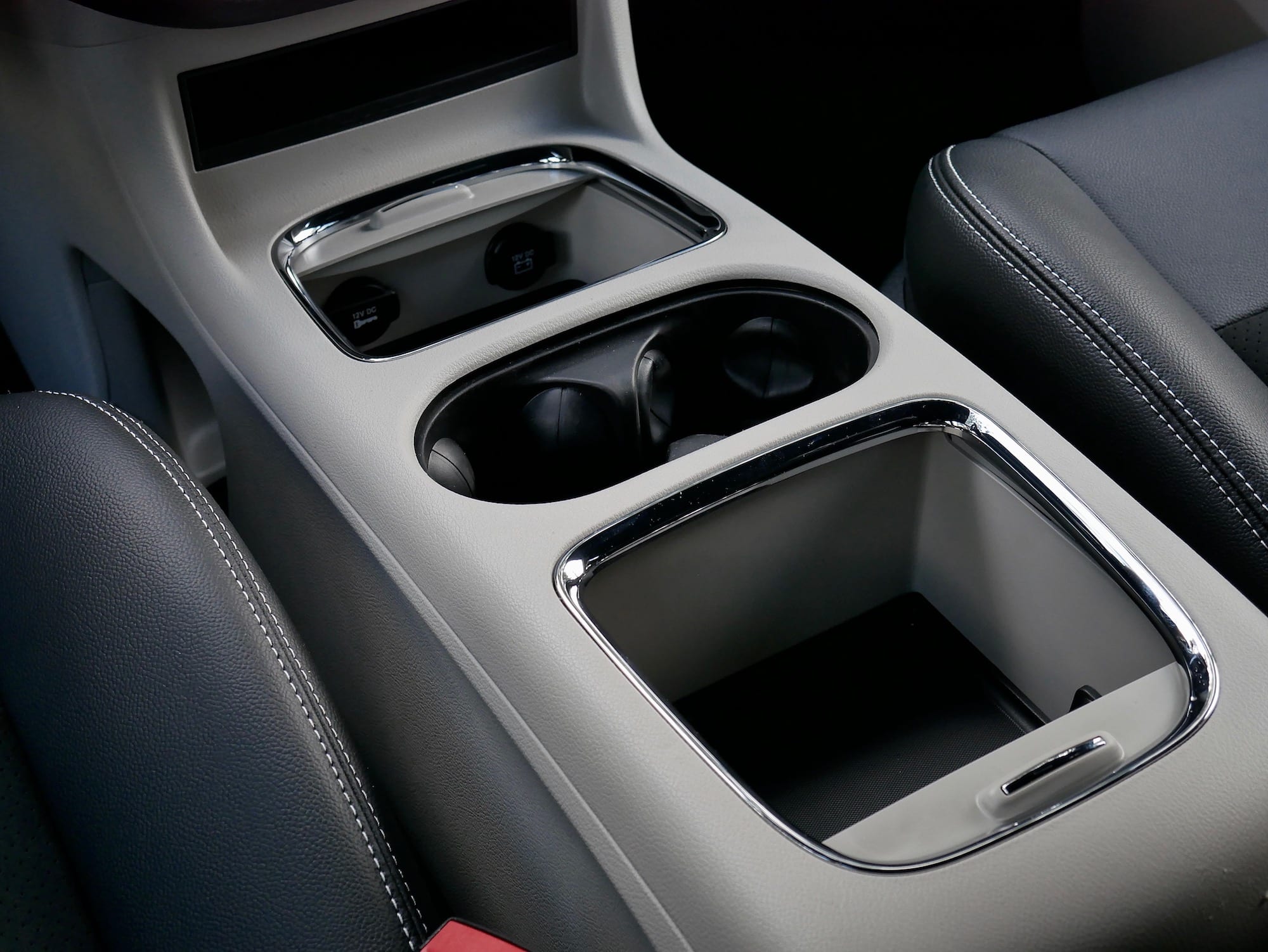 Secondly, with automotive technology and smartphone technology moving so fast, the already dated tech in the Grand Caravan means you’ll be living in the dark ages before you know it. This is fine if you don’t mind that, but for anyone who likes to keep up with the times, a newer design would suit you better.

Those are the two big complaints of the model. I could nitpick about how the engine isn’t as fuel-efficient as competitors, or the fact that the cargo and interior volume isn’t quite as good, but the first two complaints are far more important. 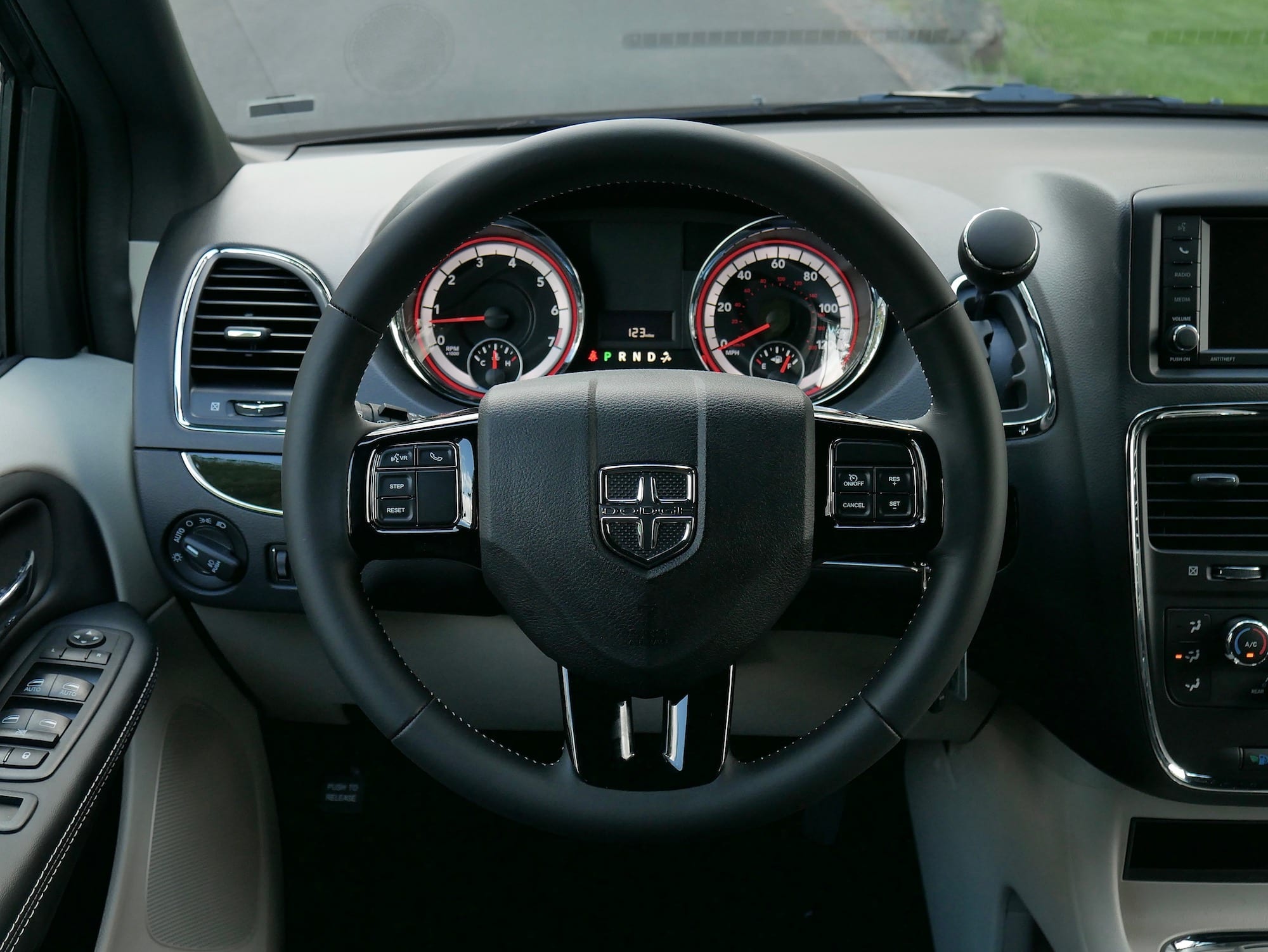 Judging by my comments above, you might expect I would recommend other minivans. The answer is yes if you have the money. If you’re on a tighter budget or don’t care about the technology in newer models, then the Grand Caravan does justify its price.

This vehicle comes in with a price tag of $27,040. That’s a reasonable sum for something so useful. That’s cheaper than all of the competition. It’s not a ton cheaper when you look at just the base models, but if you climb the ladder a bit, you’ll notice that the price difference becomes wider.

This means the Grand Caravan is a better deal at a higher trim level. If however, you were going to buy a low trim level, you might want to look at the Kia Sedona or the Chrysler Pacifica, which are both much newer designs but come at only a slightly higher price tag in the lower trim levels. 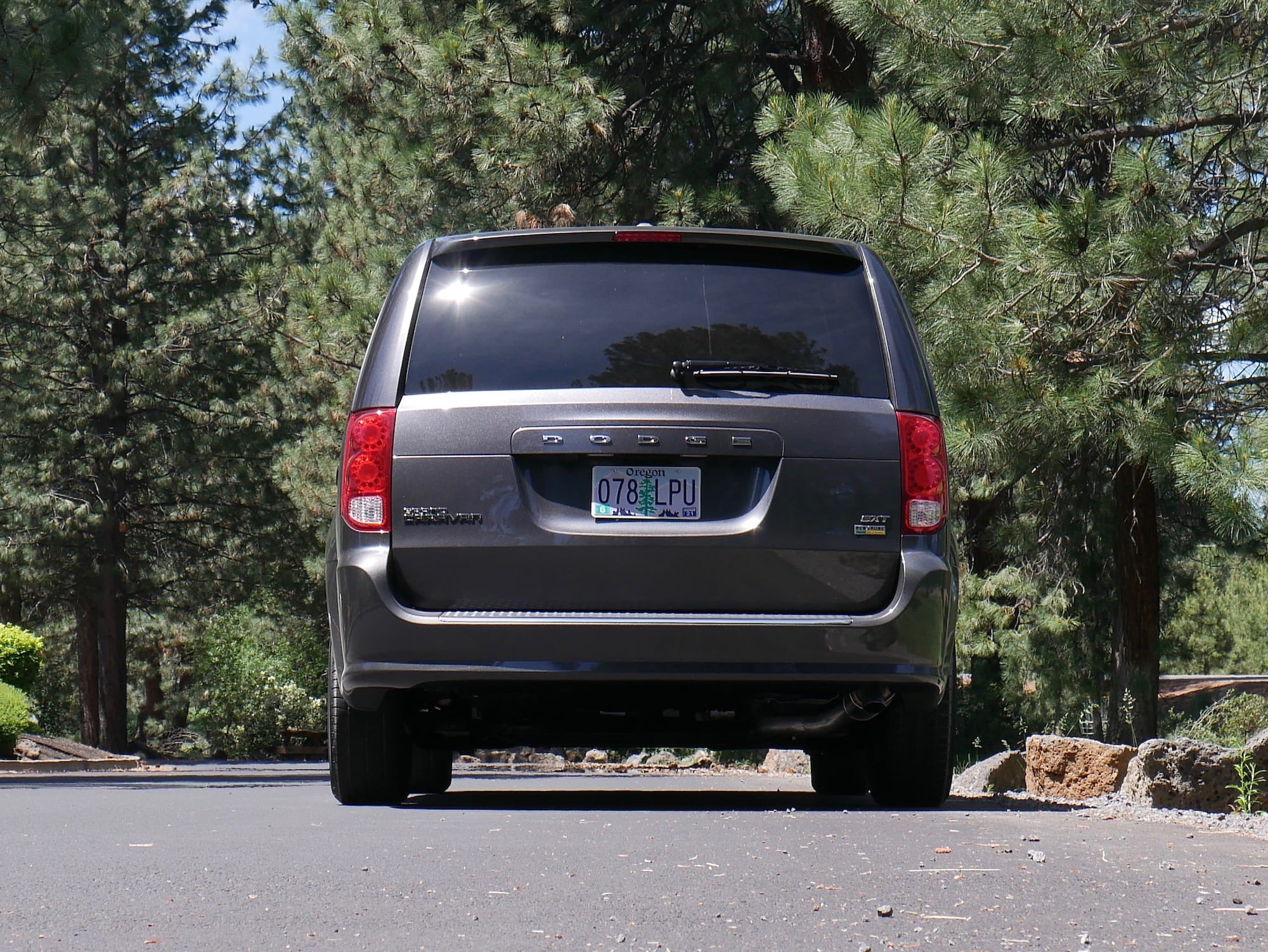 I’m not much of a minivan guy, but I came away from my time with the Grand Caravan appreciating the vehicle for what it is—a simple cargo and people mover. At that mission, it performs well.

It’s not the fanciest minivan out there, and you can get a newer design for only a little bit more money, but the Grand Caravan does have a place in the market.

That place is at the bottom of the minivan pricing ladder and at the top of the high-value spectrum. This recipe yields good sales results for the company. Dodge’s aging model still has some life left in it. It’s not a super special vehicle, but it is worth the money Dodge asks for it, and that’s why it’s still around and still selling.