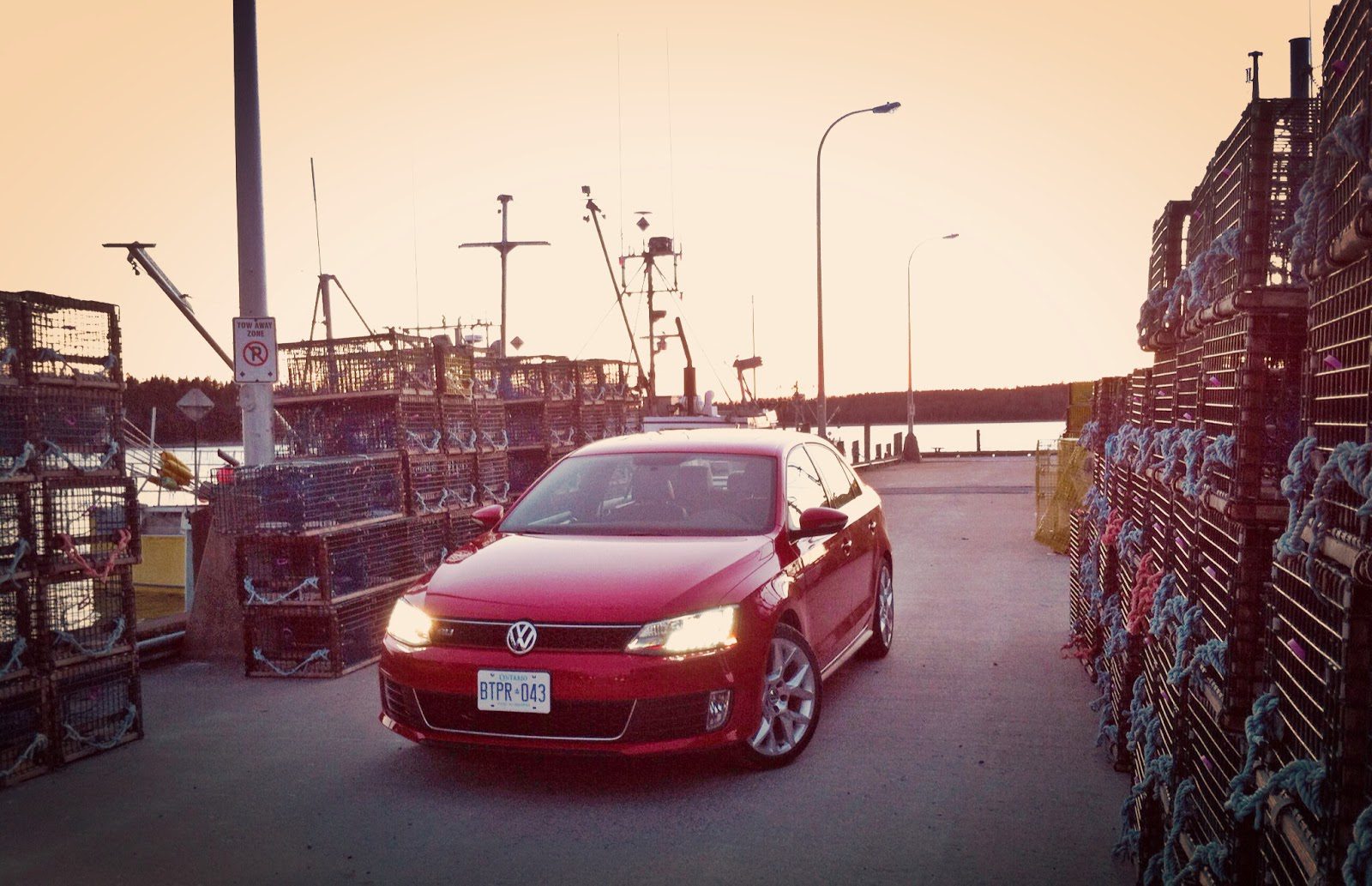 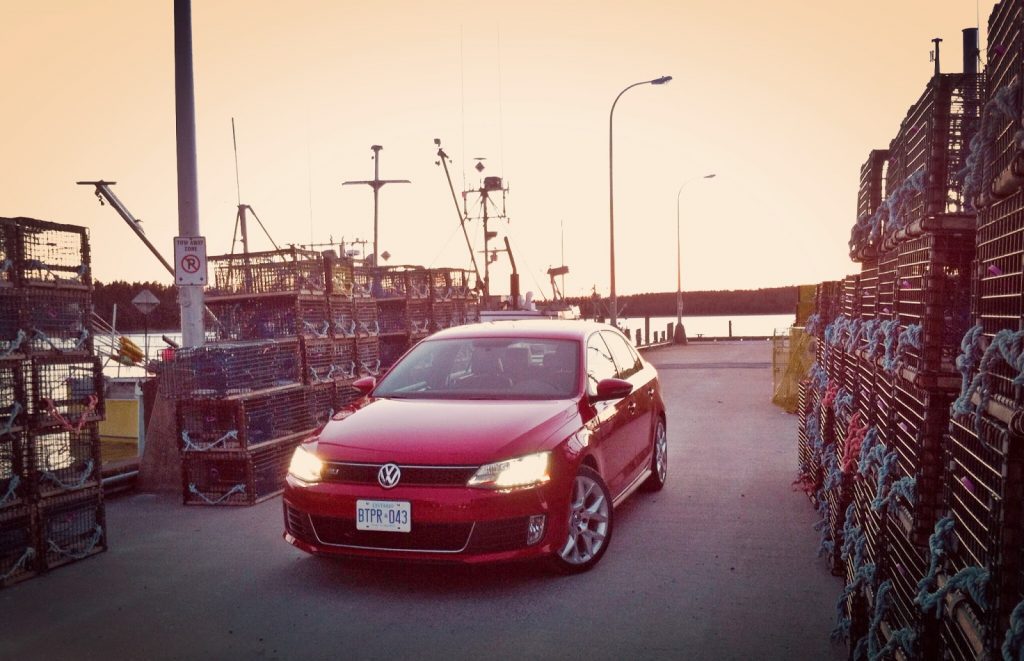 They could scarcely be more different.

There’s the whole 7-seat versus 5-seat thing; sliding doors versus front-hinged doors; the big V6 versus a small four-cylinder turbo. One is a Detroit-badged minivan built by what is now an Italian (Dutch?) company operating in Canada, across the river from Detroit. The other, the subject of this review after a week in GCBC’s safe keeping, is a Mexican-built, German-badged sedan.

Indeed, times have changed, but both vehicles have the capability of causing onlookers to wax nostalgic. I spent many of my formative years in the back of a Chrysler minivan. They were quite compact on the outside yet so vast inside. Power doors? Not a chance – none of the rear windows did anything more than vent.

This GLI, on the other hand, is yet another manifestation of what Volkswagen has always done best: surprisingly quick and practical small cars. Your parents drove a Caravan, and you perhaps recall it fondly, but you wished they’d had fewer kids so you could have been chauffeured in the back of a Golf GTI or a GTI with a trunk, the Jetta GLI. 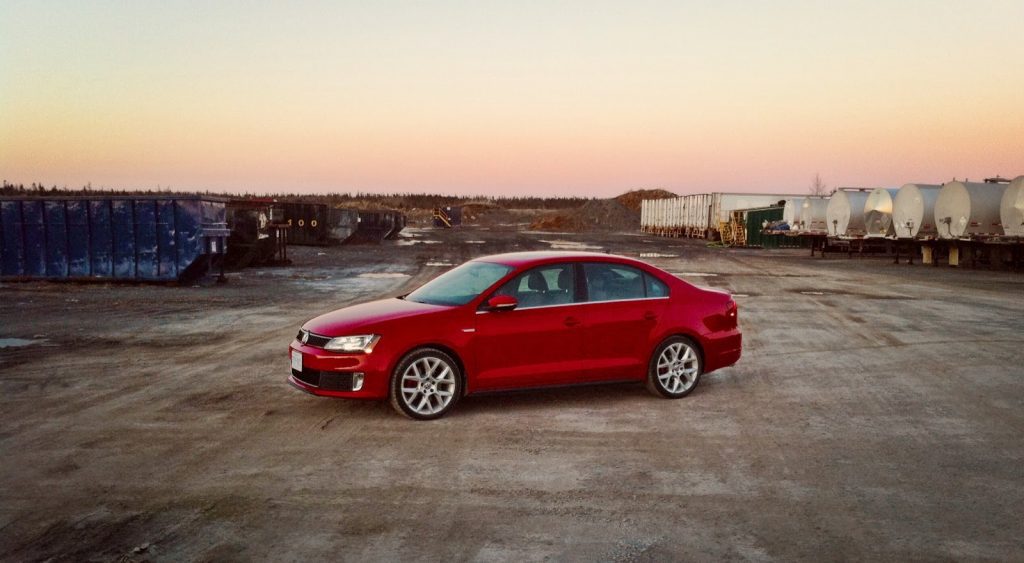 Minivans have come a long way. The 2014 Dodge Grand Caravan 30th Anniversary is a people-carrying behemoth with five seats that fold into the floor and 283 horsepower. Through the first two months of 2014, it’s also Canada’s third-best-selling vehicle.

Ignore comparisons between the car you see here and the 90-horsepower Jetta GLI of 1984, however, and forget (if you can) this car’s direct predecessor, the more Golf GTI-like fifth-generation Jetta GLI. 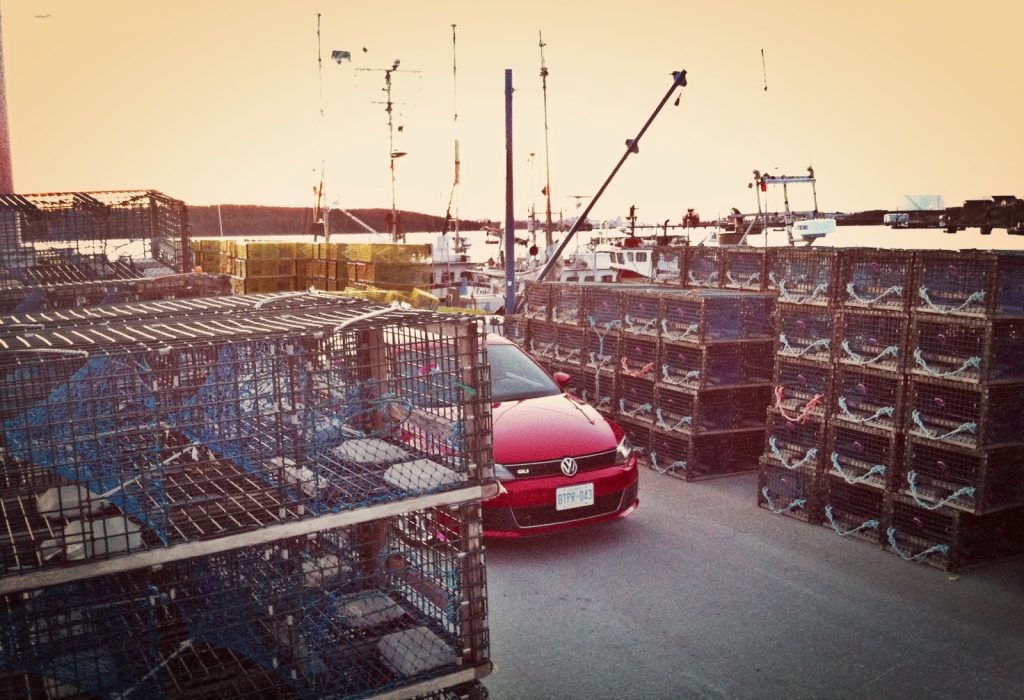 That’s by no means a simple commentary regarding its excellent on-road dynamics or the fact that it looks better than other Jettas. Inside, from the soft-touch plastic atop the dashboard to the finely-stitched leather wheel to the mode by which climate controls are turned, this is more a Volkswagen for Volkswagen lovers. When Volkswagen introduced this much less costly A6 Jetta for 2011, the biggest round of complaints were reserved not for its bland exterior but for its cabin’s material quality. That’s not a fair complaint in this GLI. (Neither was it a complaint that held buyers back, as Jetta volume rose to record levels.)

Passenger comfort is top-notch, as expected. These aren’t the lemon-squeezing Recaro seats of the Focus ST, nor is this car a proper competitor for the Ford. This is a car in which five individuals could take a long journey. Their stuff will fit in the vast, squared-off, 439-litre trunk, as well. LATCH anchors for our infant seat were all but impossible to properly secure, and it was bad enough for us to switch to a belt fitting. But space for a sub-midsize car is abundant, visibility is terrific, and rear passengers are never treated to harsh impacts from a rear beam axle in a car that’s been tuned too aggressively. (Like all sixth-gen GLIs and now all 2014 Jettas, this car features independent rear suspension.)

There are niggling issues inside. As in other Volkswagens, the speedometer’s numbers are too closely aligned, meaning there aren’t nearly enough millimetres of distance between 80 kmh and 100 kmh. Look twice.

Speaking of 1984, the infotainment unit isn’t complicated, but it sure doesn’t represent progress in the car/tech universe.

And though it’s a sensation generated by the optional exterior and nothing more than a subjective impression, this Tornado Red GLI with its Edition 30-specific Watkins Glen 18-inch wheels actually causes passers-by to do a double take, which defeats much of the Jetta GLI’s sleeper appeal. In black, with the GLI’s normal 17-inchers or the optional 18-inch Bathursts, a GLI flies way under the radar while still looking classy.

Aided by the always-smooth dual-clutch automatic transmission and despite small dose of exterior panache, the 2014 GLI has the capability to trick passengers into assuming this a fairly conventional Jetta, never a bad thing. The somewhat Subaru-like burble of the 210-horsepower 2.0L turbocharged four-cylinder is muted when not actively called upon. As mentioned, ride quality is on the comfortable side of firm. Plentiful torque, all 207 lb-ft, is available not far above idle, so moderately swift progress is made up on-ramps without alerting passengers to the thrills that can be found with a heavier right foot.

By modern standards, Volkswagen’s 2.0T doesn’t imbue performance cars with the kind of power they need in order to be considered fast cars, at least not at this output level. But modern standards – 252-bhp Focuses and 290-bhp Hyundai Santa Fes – have skewed our thinking. This car has more than enough power to get you into trouble, and in part because it’s so torquey, it feels a lot more like a car with 230-240 horsepower than one with 210. The 2.0T’s sound also inspires the driver to delve into the wide power band more often than necessary just to hear the braaaap. 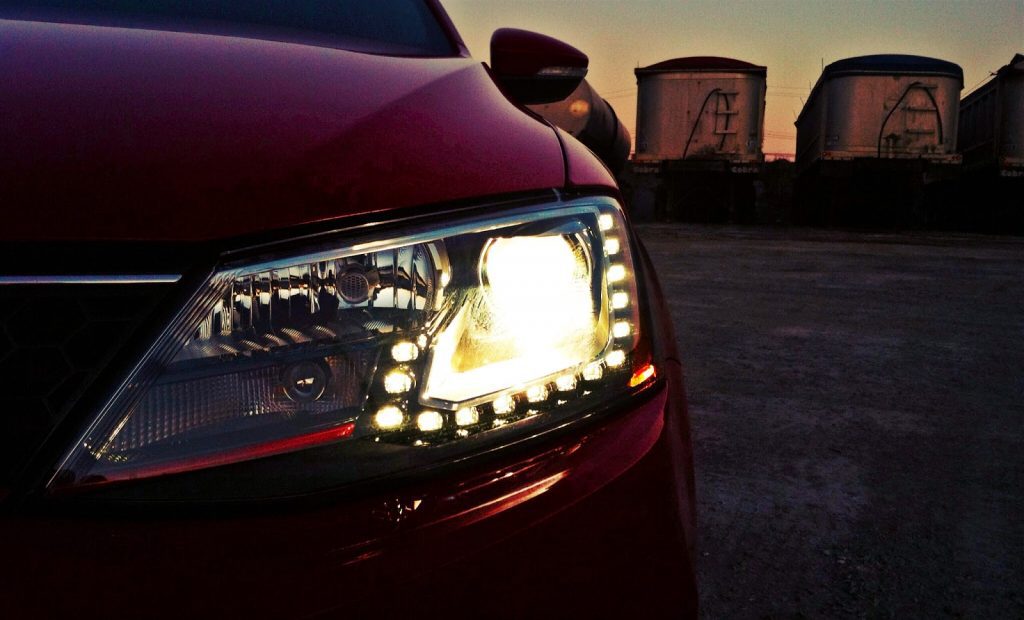 Nor does the 2014 Jetta GLI tackle corners like a Focus ST or the Golf R GCBC reviewed last winter. That’s not to say it won’t outhandle every non-performance-oriented compact and midsize car available, because it will, and it will do so with a level of engagement from the steering and seat cushion that’s missing in the non-Si Civic Coupe we’re testing this week. Yet more importantly, the GLI’s relatively high level of handling prowess is matched – exceeded, in fact – by its ability to cosset during a Sunday afternoon cruise around town with the grandparents and baby in the back seat.

While not catering to an enthusiast who wants an outright track monster with from-the-factory autocross potential, Volkswagen has perfectly tuned the 2014 Jetta GLI Edition 30’s suspension to satisfy enthusiasts with its all-around, everyday appeal. It’s a car that will accelerate to 100 kmh in a good bit less than seven seconds, but it’s also a car that consumed just 7.7 litres per 100 km (31 U.S. mpg) during a cold week of sometimes aggressive driving. It offers a measure of quietness and luxury for five occupants and their cargo, but the GLI is also a car that genuinely wants to be driven with purpose. Weight has been kept in check, and it has become an agile and typically solid German car with an appetite for Sunday evening blasts up the coast. 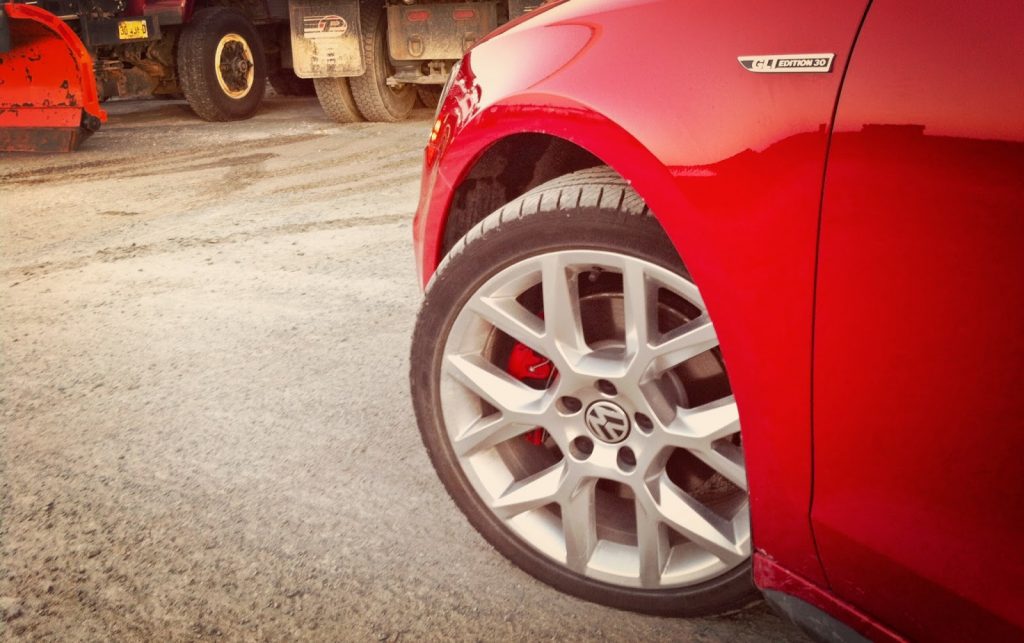 For striking such an impressive balance, Volkswagen wants to be handsomely rewarded. Our test car rang in at $35,640.

GLIs don’t need to be this expensive, of course, if you’re willing to sacrifice the Edition 30’s special bits, a technology package that includes an excellent Fender audio system, the direct-shift gearbox, and big wheels.

Nevertheless, weighing the merits of this specific car against some of its compatriots in the entry-level luxury arena, cars which compete at a similar price point, doesn’t generate an unfavourable result for the Jetta GLI Edition 30. With superior power, a heavy feature load, surprising efficiency, and extra rear seat space, it’s the winner on paper. And as badge snobbery causes so many to flock to the BMW 3-Series and Mercedes-Benz C-Class, a special edition Jetta actually ends up being the unique car.

Plus ça change, plus c’est la même chose, wrote Alphonse Karr. Except for, you know, minivans with DVD players coming out of the ceiling and vacuums extending forth from behind the third row. Except for that.