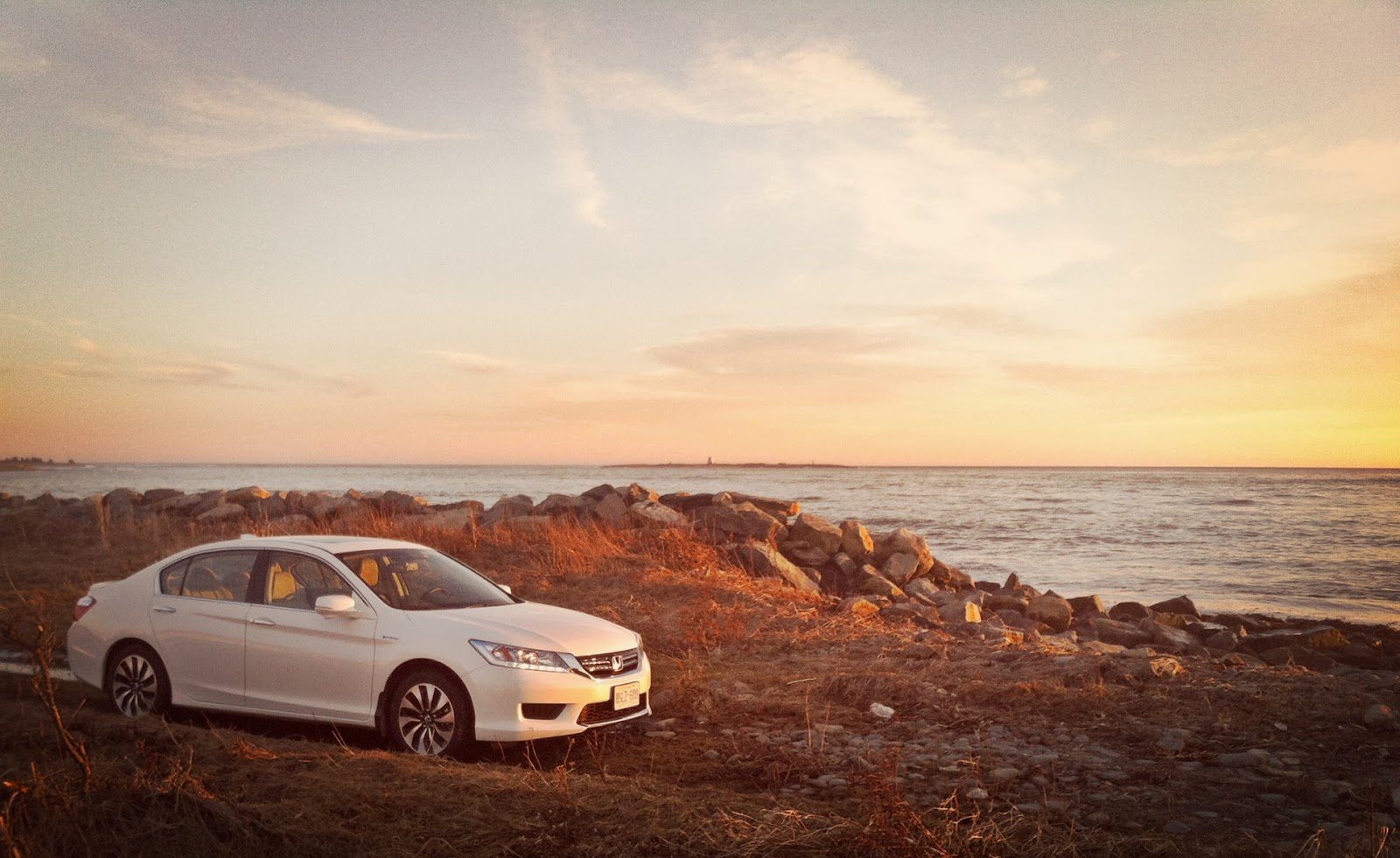 2014 Honda Accord Hybrid Review – So Normal And Yet So Weird Which Honda Accord Hybrid should we review?

The one Honda touts as an ultra-efficient 47-mpg sedan, or the one GoodCarBadCar tested last week in a variety of circumstances which travelled only 34 miles on a gallon of gasoline?

With spring-like temperatures prevailing and fewer than 4000 kilometres on our test car’s odometer, the Accord Hybrid that Honda Canada had delivered to GCBC Towers wasn’t operating in the most ideal situation, nor had stars aligned to automatically minimize its greenness. There was no polar vortex (also known as winter, according to Jian Ghomeshi) hampering the Accord’s battery, I didn’t drive the car aggressively, and the emphasis on city driving should only have helped this hybrid, although the car’s freshness had limited its lifetime efficiency to just 29 miles per gallon before it arrived in Eastern Passage, Nova Scotia.

I don’t believe hybrids should be forced to qualify themselves on fuel efficiency grounds, at least not on fuel efficiency grounds alone. (Then again, the performance credentials of the previous Accord Hybrid, and its lack of outright economy, played a role in its undoing.) Yet because the 2014 Honda Accord Hybrid is supposedly so outrageously economical, I can’t help but be swayed by its underperforming nature over the last seven days.

And yet again, I can’t help but think this 34-mpg performance was an anomaly. Reports from other auto reviewers, most notably warm-weather-based Edmunds, concluded that the break-even point was more forthcoming in the new Accord Hybrid than anticipated. Car & Driver’s 41-mpg result was down 14% from the Accord’s combined rating. TTAC’s Alex Dykes recorded 46 mpg, off the EPA’s rating by just 2%. 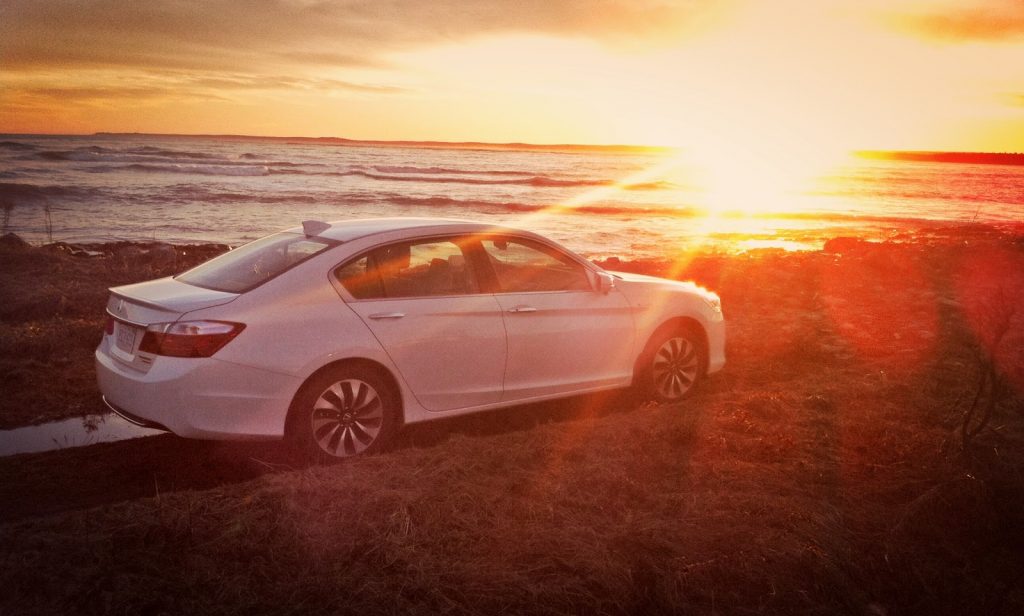 Whether the Honda Accord Hybrid receives an overwhelmingly positive verdict or a negative review shouldn’t boil down exclusively to fuel efficiency. In Canada, this top-end Touring trim Accord Hybrid is a $37,385 car. If saving money was the only goal, you’d be better served by a Honda Fit, a Honda Civic, an Accord LX, or perhaps even an Accord Hybrid without the Touring’s extra features. Just as – if not more – pertinent is the 2014 Accord Hybrid Touring’s knack for being a Honda, for being an Accord, for being a proper midsize family car, and for being a value at $37,375. Or for failing on all fronts.

While the verdict is out on how well the new Accord Hybrid fares at being an efficient hybrid, it is a prototypical Honda, maybe the best Accord, and a compelling midsize alternative. Even at 34 mpg, it was more efficient than GCBC’s previous test car, a similarly-priced Volkswagen Passat TDI, and clearly the better value on paper.

To live with, yes, the Honda/Acura dual-screen infotainment unit is fussy, excessive, and not at all intuitive. But it’s livable, and the rest of the Accord’s interior is blissfully comfortable and sensible. It’s not overly stylish by any means, but quality is high, both in terms of the pieces used and the way they’re put together.

Rear seat space is substantial; more substantial than it looks. Front seat comfort is spot on: seats are just cushy enough to not be firm and just firm enough to not be cushy. Finding the right position (aided by power seats) is just as easy as you’d expect in a Honda, where good visibility is taken for granted.

True, the blind spot monitoring system only monitors the right side, but it does it in a far better way (with a perfectly angled camera that displays its findings on the centre screen) than any other I’ve used, perfect for city drivers who fear cyclists and pedestrians.

On the road, the Hybrid hasn’t lost the Accord’s sharp steering or its ride and handling balance. A Mazda 6 owner (if there are any?) would find the ride soft; a Camry owner (since there are many) would find the Accord firm. Driven aggressively through a series of bends on rough roads, the Accord never reveals itself to be unsettled and never jars its occupants, a feat which can only be accomplished in part by the vast majority of its rivals, which either don’t enjoy tackling the twisties or can only do so in tandem with a stiff suspension that makes you pay for it later.

Surprisingly, I didn’t mind the Accord Hybrid’s non-linear output. How could I, what with the masses of readily available torque and the wonderful means by which multiple powerplants work together to thrust the Accord forward, well and properly, from high speeds to much higher speeds. 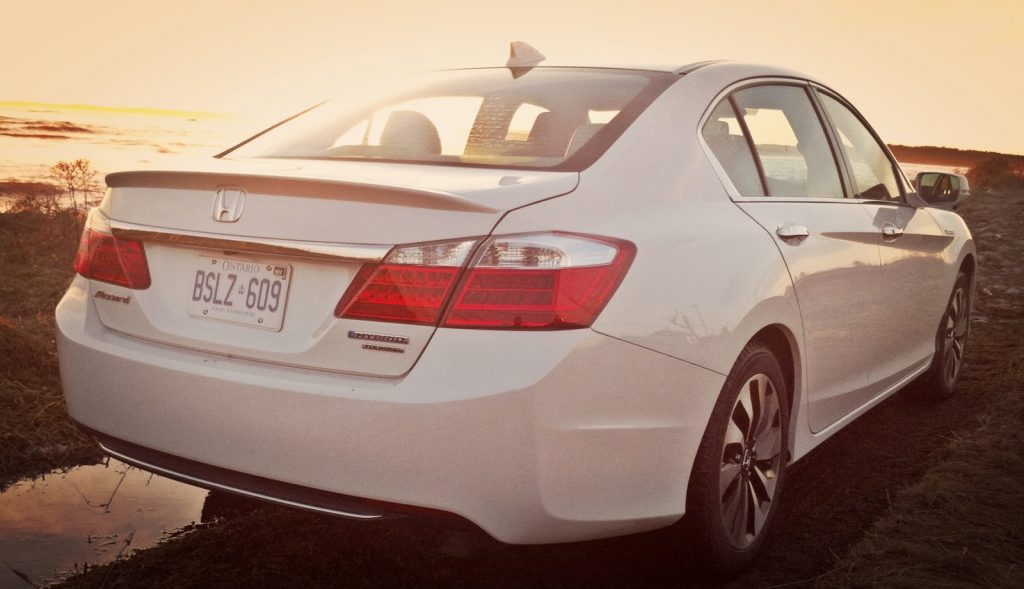 But I did mind the unpredictability of it all, the guessing game of, “Where will the revs go next?”, which sometimes seemed to have nothing to do with the angle of my foot on the throttle pedal. Maybe it’s because I don’t completely understand, not working in Honda R&D, how the Accord Hybrid doesn’t send its power through a conventional transmission, or, for that matter, an unconventional transmission. It might have something to do with the fact that I can’t comprehend the means by which the Accord Hybrid decides, “Now it’s time for EV mode,” and, “Now it’s time for everything to work together… at full volume!” Regardless, it’s weird.

It’s not so weird that I couldn’t adapt to the way this Honda shouts its intentions to onlookers by suggesting I’m rocketing away from an intersection when in fact I’m just rolling leisurely along, or vice versa. It’s not so weird that I can’t grasp that this is a very quick and a very efficient Accord, and even the slow and not-as-efficient Accords in my past have been very good cars, indeed.

I couldn’t look forward to owning a car with rear seats that don’t fold down, however. That lack of flexibility led me to institute a new test for every car visiting GCBC Towers: the ISTBTP – Interior Storage Tennis Ball Test Protocol, probably not SAE-approved – involves shoving as many tennis balls as possible into the centre console compartment and closing the lid without forcing it.

Hey, if the trunk can’t be expanded, which is very stupid, I need to put stuff some place, right? The Accord’s centre console, which doesn’t look that big, held 14 tennis balls. I think that’s a lot, because the only other car I’ve tested so far, a 2014 Toyota Corolla, consumed nine in its centre console. (We began testing gloveboxes in the Corolla, too – it swallows 38, enough to break the internet.) 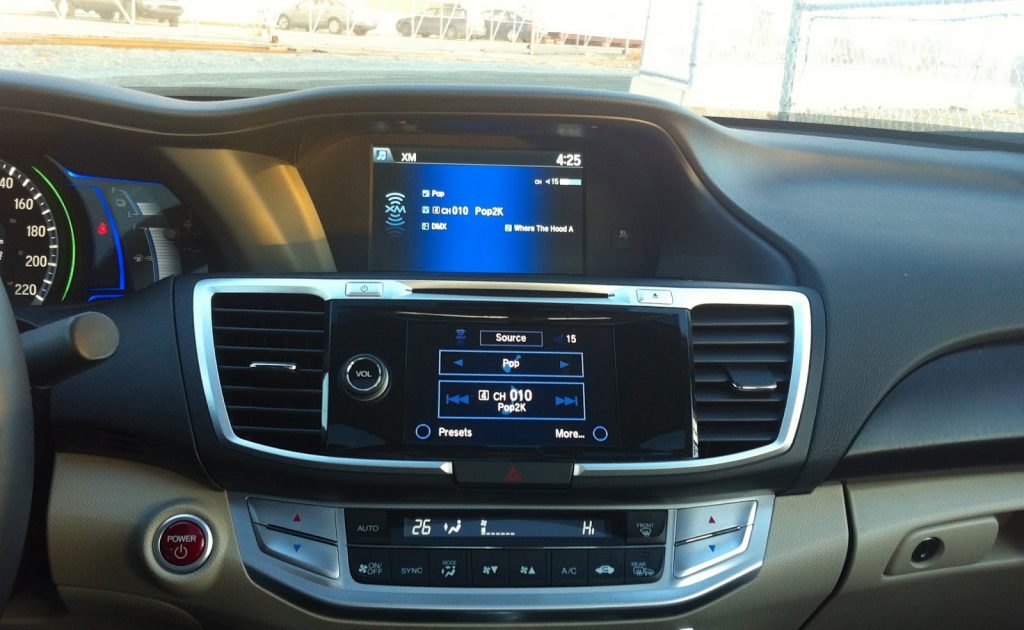 We started not knowing which review to write. So let’s end with the results from two different reviews.

Review number one: I quite like the Honda Accord Hybrid; I’ve even grown to really like its clean exterior design. But I’m disturbed by its inflexible cabin, perturbed by its infotainment unit, and befuddled by its poor – relative to its EPA ratings – real-world fuel mileage.

Review number two: Imagine how much I would have enjoyed the Accord Hybrid if I hadn’t spent 40% more on fuel than I should have.

Now you get to decide which review you just finished reading.