These people, they all come back from Giza pronouncing their incredulity. All those thousands of years ago, how could people build those massive pyramids with little more than their bare hands?

Well, they used to come back in disbelief. Sadly, they, the tourists, don’t actually go to Egypt anymore.
But seemingly everybody visits Wolfville, Nova Scotia, in the early days of autumn, particularly when those days are Saturdays and the temperature rises above 20º Celsius. As a result, the Evangeline Trail, which cuts straight through the middle of town, becomes a parking lot, and the instant fuel economy gauge in the 2014 GMC Sierra reads 39.9 L/100km, or 6 mpg.

Rather than forge ahead to one of the many roadside farm markets, we decided to veer off the beaten path to take an up-close look at the many kilometres of dikes which were built by Acadians along the Fundy shore some 300 years ago.

How up-close? We actually drove on top of the dikes, which were typically wide enough for one GMC Sierra and, perhaps, a bicycle. We were amazed at the scenery, the ingenuity, and the labour-intensive process; disturbed that the Acadians’ work was rewarded by Le Grand Dérangement.

Perhaps the dikes aren’t as jaw-droppingly impressive as Egypt’s pyramids, but in a region which features the highest tides in the world, these dikes continue to protect thousands of acres of farmland which literally puts food on our table.

As I struggle to build a gate for our otherwise fenced-in backyard; as I plumb the depths of my inadequacy while assembling an Ikea crib, I’m in awe of what human hands achieved in the distant past. And I identify with the feelings of a conventional car when it’s parked alongside a modern pickup truck, a truck like this all-new GMC Sierra. 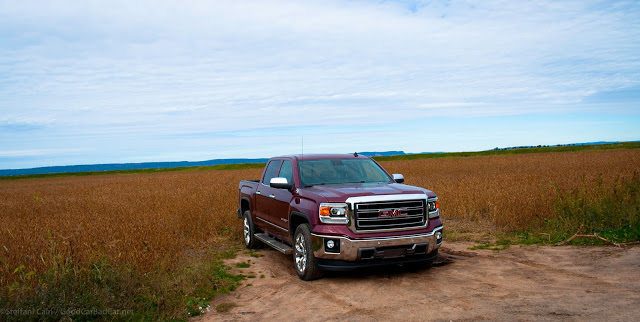 Trucks are increasingly accomplished in city and backroad driving. No, I couldn’t hustle the Sierra around the Avon Peninsula’s twisty roads like a Mazda MX-5, but the speed limit did seem too low, even perched this high off the ground. Besides the backup camera and excellent visibility from its square windows, in-town driving has been made more comfortable with predictable throttle response and positive brake feel. When you’re, say, performing a 90-degree uphill right-hander in downtown Halifax, there’s so much less side-to-side wallowing in the Sierra than you’ve come to expect from trucks.

Cars feel better than trucks on twisty roads and city streets, but trucks, including this all-new General Motors pickup line, have made great strides toward being car-like in the good ways.

Yet trucks have only grown more truck-like. The Sierra’s 5.3L V8 is torquier than it was. It is immensely capable off-road. Its structure is stiffer.

This Sierra is hushed inside, not just more hushed than the old Sierra or other trucks, but more hushed than most cars.
The advent of family pickups has created this crew cab variant with enough leg-stretching space for the lankiest among us but, more usefully, enough hip room for my three rear-seat-riding adults to excitedly say, “We’re not touching!”
That which cars do best, trucks also do in large measure. However, that which trucks do best, cars don’t really do at all, or they only do so in a very small measure. General Motors’ new truck platform, in large part due to the space and silence, exemplifies this pickup progress.

Driving through the roughest parts of Elderkin’s U-Pick, owners of the Volkswagen Golfs and Kia Souls and Honda Accords stared jealously as we serenely and effortlessly ventured up the hill toward the Honeycrisps and through the woods towards a tucked-away orchard of Cortlands. Could they have made it? Maybe, though probably not damage-free. Indeed, even the cars appeared emasculated. I think I saw grilles sadly droop. Low-profile tires tried to suck in extra air. Trunklids flew open as if to say, “We can carry more cargo… maybe.”

Regarding trucks, cars feel the way I do when I compare my modern methodology – “Is there a how-to video on YouTube for that?” – with the methods employed in ancient Egypt. Inadequate, inept, inferior.

No, we didn’t carry a load of mulch and we didn’t tow an RV to a camp site above The Lookoff. We’re city folk. We haul 20 pounds of apples, a couple pairs of rubber boots, and a cooler full of tuna sandwiches. We help friends move couches and throw the kids’ bicycles in the back so we can drive farther into the city for a jaunt through an urban park.

Anthropomorphism aside, the new Sierra isn’t perfect. Steering isn’t as sharp as what we enjoyed in the V6-engined Ram 1500. The rear axle rides a bit stiffly and can become skittish when, you know, you’re driving a bit too quickly beside the dikes. Some buttons below the touchscreen are as out of place in a $58,000 truck as I was at my wife’s workplace baby shower. 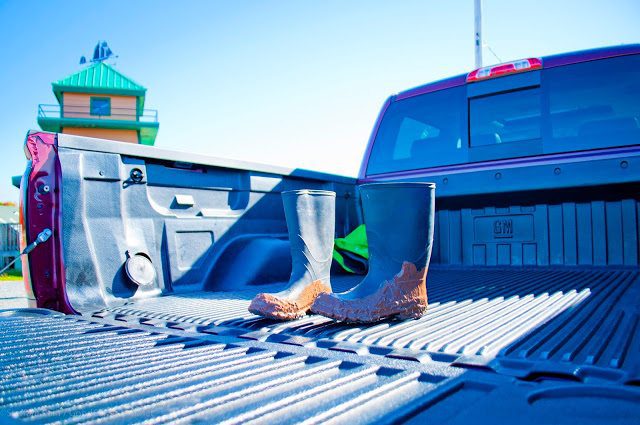 Thankfully, those brittle, crackly pieces are few in number – and thankfully, her coworkers welcomed the unborn child’s father into the fold – and this pickup otherwise does a passing impression of a genuine luxury vehicle. Features help: both front seats are heated and cooled, for example, and the Bose stereo pleased every passenger. So did the leather’s stitching and the regal presentation provided by abundant exterior chrome.

Perhaps most of all, luxury, as I define it, is most clearly seen in the spectacularly engineered damped tailgate that drew oohs and aahs from my mechanically-inclined friends. 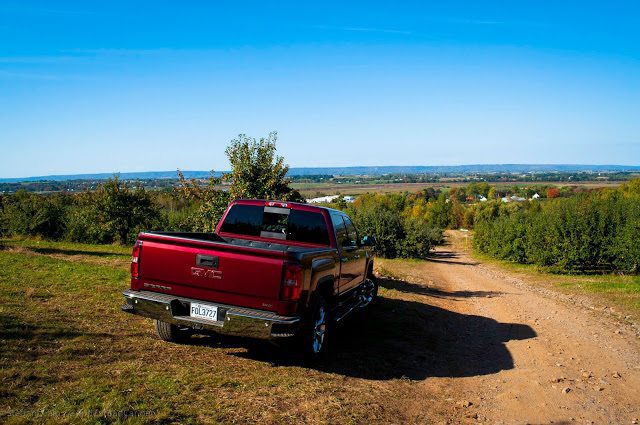 I was a little surprised that 355 horsepower didn’t feel more impactful compared with the Ram’s 3.6L V6. The 6-speed automatic transmission tends to hunt for the right gear and often falls uncomfortably into gear. If there was one reason to choose a competitor over the Sierra/Silverado twins, this 6-speed would be it. Expectations for truck transmissions are high now that Chrysler offers a seamless 8-speed in the Ram, and I’ll admit that I might not have noticed the GMC transmission’s faults had I not experienced the Ram 8-speed’s brilliance.

At $58,000, a pickup truck better be good. This Sierra stands out, however, not because of the features which drive its price up from the mid-$20s but because of its efficient V8 engine, its stout structure, and its masculine-but-not-controversial design. Sure, it looks a bit too much like the previous generation Sierra, but it’s not overdone like the 2014 Toyota Tundra or overtly aggressive like the Ram 1500, a truck which emphasizes styling that I adore but some despise.

Averaging more than 18 miles per gallon in a mix of city, highway, and busy Wolfville driving when I never actively attempted to conserve fuel should be considered a special deed. The Sierra also consistently garnered comments from passengers regarding its resounding solidity, something I’ve yet to encounter with any other test car.

Although it’s more technologically advanced than Egypt’s pyramids or Fundy’s dikes, the 2014 GMC Sierra likely won’t cause you to reflect in wonder. Nevertheless, one week in this truck did have me asking, “How’d they do that?”, not just about the tailgate or the fuel efficiency, but about the truck in general.
Now I just have to figure out how to adjust the recline function on my new office chair.