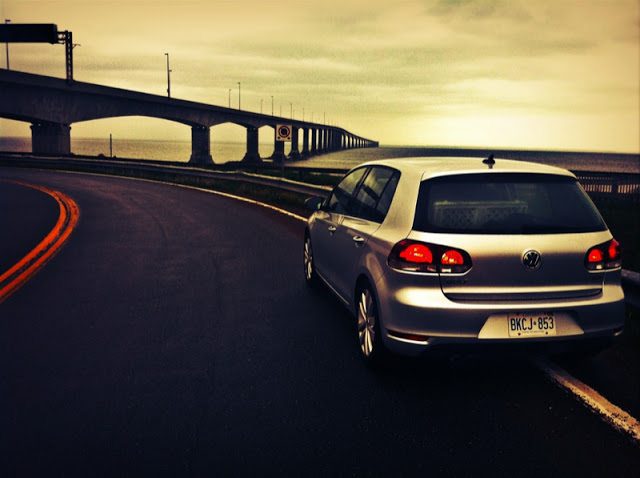 We were on a mission, the Mrs. and I. After keeping a secret for three months, we were about to reveal to her family – all together in one place for the first time in more than two years – that GoodCarBadCar will have a future after I kick the proverbial bucket.

Little does our unborn child know that this site, this great inheritance, will be his (or hers) when automotive sales figures are finally dominated by the battery-operated, self-driving successors to today’s cars.

To tell my in-laws, however, we had to get to Prince Edward Island, home to most of our ancestors. But this new-found with-child knowledge has inspired us to greater frugality, and the fear that last week’s manufacturer-supplied press car was actually going to be a manufacturer-supplied pickup truck had us wondering which was more important: gas for a Hemi V8, or the Baby Jogger stroller I’ve been eyeing at Fiddleheads in Dartmouth. It’s a three-wheeler, just like your favourite Morgan. 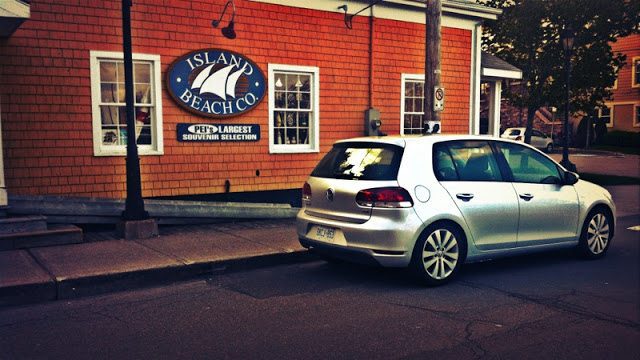 We needn’t have worried. GoodCarBadcar’s schedule was altered, and what landed in GCBC’s driveway couldn’t have been much more of a penny-pincher. Consuming diesel at a rate of just 5.8 litres per 100 kilometres, fuel costs were an afterthought on our trip to Prince Edward Island. And because of its special edition run-out trim, the 2013 Volkswagen Golf TDI that arrived had slightly special airs about it, too.

Miserly though the 2.0L, 140-horsepower turbocharged diesel may be – and it is, it always is – purchasing a Golf isn’t like purchasing a Jetta. With the 6-speed automatic, actually a direct shift dual-clutch gearbox, the 2013 Volkswagen Golf TDI Wolfsburg Edition rings in at $28,375. For two grand less, buyers of the hatchback version of Canada’s current best-selling car, the Hyundai Elantra, can buy a top-end SE Tech version with a rearview camera, cooled glove box, navigation, and leather seating, none of which can be had in the Wolfsburg Edition Golf.

Moreover, if you find yourself demanding nothing more than a diesel VeeDub, a Jetta Comfortline with the DSG costs $25,590. Price gaps nearing $3K go a long way to explaining why Volkswagen Canada sells 2.6 Jettas for every Golf.

Wolfsburg Editions aside, the price gap between Golfs and Jettas is quickly elucidated during a brief drive. They don’t feel like the same car, the Jetta no longer being a Golf with a trunk. Golfs feel lighter and consequently more agile; they steer with better linearity and feel; and inside, they feel like pricier tickets. Which they are. 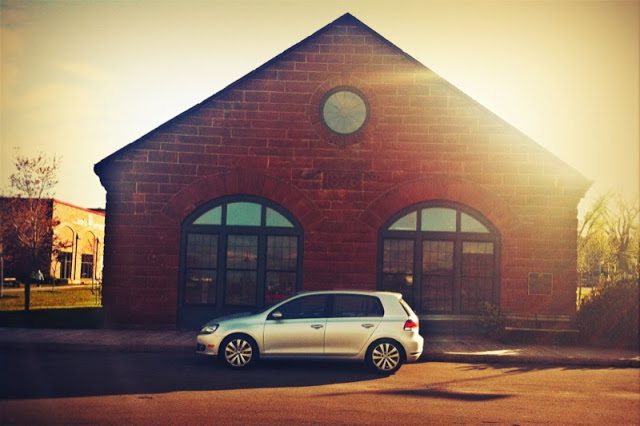 Ze German engineeeeeering comes at a price, and I don’t just mean the higher MSRP. The sport suspension in this Wolfsburg Edition Golf delivers a harsher ride than I’ve come to expect in Volkswagens. I tolerated it; my mother wouldn’t. For me, the firmness was made more obvious by a lack of padding at the top of the seatback, a complaint I suspect wouldn’t be lodged by the majority of drivers whose spines are less sensitive than mine. Overall, it’s hard to complain about seats that hug you about as tight as the grandmother who hasn’t seen you in a year. 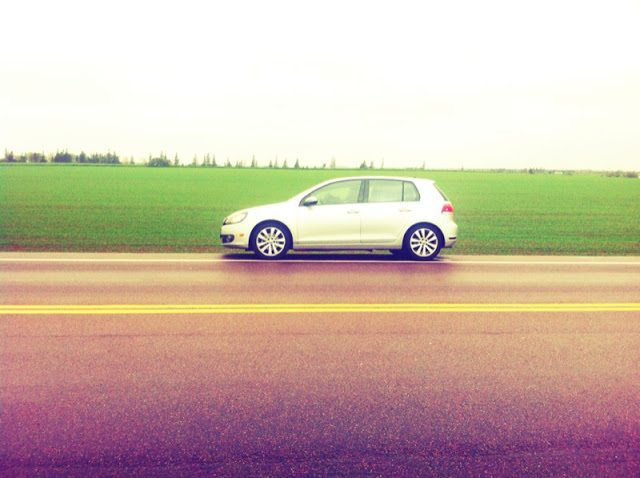 This journey, in particular, was dominated not by the fact that we were driving another example of Volkswagen’s Mk6 Golf even as Europeans begin to notice an influx of Mk7 Golfs on their roadways, nor by any regrets over the timing of the spectacular Golf R’s premature arrival in GCBC’s driveway, in the dead of winter, before we could make this trip to Prince Edward Island. No, this trip was all about two tremendously explicit, unambiguous, straightforward words: Golf diesel. 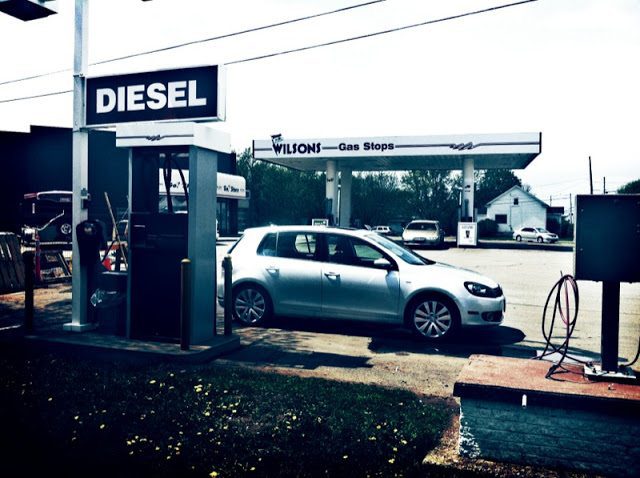 Both of the Golf’s two (birthed) human occupants have spent enough time in numerous generations of Volkswagen’s venerable hatchback to understand the depth of its flexibility. Usable rear seat space can be sacrificed for load-lugging capacity in a very nicely carpeted cargo area. (You’ll find the same impressive finish inside the door’s map pockets/cupholders.) 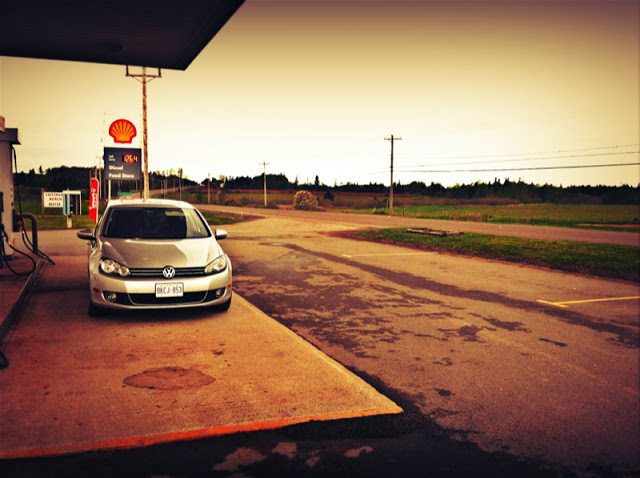 Not so surprising was the Golf’s ability to consume such small quantities of diesel fuel. You expect slow cars to consume less fuel, but the Golf TDI isn’t slow. Pickup from rest isn’t really, well… it really doesn’t exist. But passing power, an absolute necessity on the road through New Brunswick leading to the bridge, is plentiful. A modern diesel’s ability to push you back in your seat with gentle but undeniable force, with 236 lb-ft of torque in this case, is enjoyable in the real world in a way that high-end horsepower is in the rarest of daily circumstances. 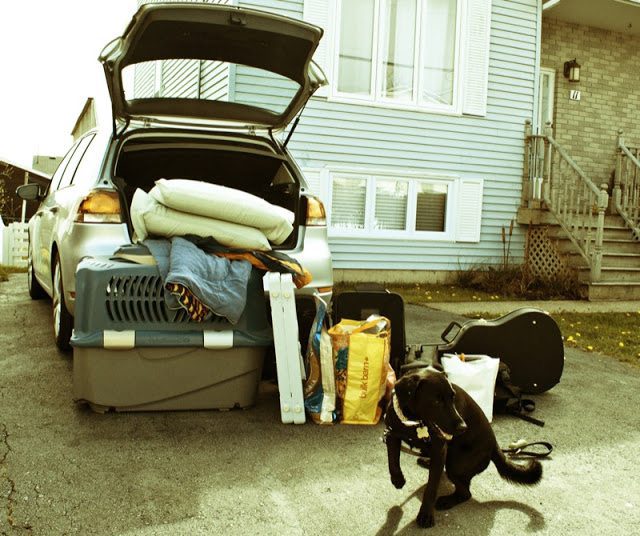 Before we left for The Island, I’d already driven the Golf Wolfsburg for quite some time in and around Halifax. In purely city driving, the Golf drank at a rate of just 6.1 litres per 100 kilometres. That’s 38.6 miles per gallon in U.S. terms, in a car which earned a rating of 30 mpg from the EPA. On highways with a posted limit of 110 kmh, consumption dropped to 5.7 litres per 100 km, or 41.3 mpg, just under the EPA’s 42 mpg highway rating, which doesn’t take into account 70 mph speeds.

Lower speeds on PEI’s highways, mixed in with a bit of city driving in the surprisingly heavily-trafficked Charlottetown metropolis and some air-con, brought consumption back down to 5.8 L/100km, or 40.6 mpg. The drive back to Nova Scotia resulted in a firming up of the consistency theme with another 5.7L/100km result. (All mileage was measured at the pump, as the on-board computer was too eager to report otherworldly figures.)

For buyers looking to save as much money as possible on their new car purchase, a diesel-powered Golf isn’t the way to go. You can buy new subcompacts for half the price of this car, and they’re really quite efficient. For buyers looking to spend a smidge under $30K, however, the savings generated by the roomy, fun, handsome, and very German Golf Wolfsburg TDI are appealing and undeniable.

It’s not perfect. The tires create too much roar, there’s lag at low revs, it’s not heavily-laden with features, it periodically sounds like an 18-wheeler, it doesn’t carry as much stuff as a wagon would, it’s a bit pricy, and it takes its time setting up a Bluetooth user. But it is lovable, just as Golfs have always been.

Sounds a lot like the description parents give for their newborns, eh? Loud, a bit slow at the start, not particularly useful, producers of strange sounds, not very strong, quite expensive, and not all that techy. But lovable nonetheless.