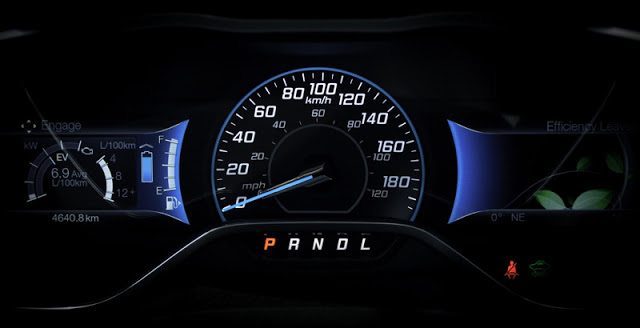 If you’ve just read GCBC’s review of the 2013 Ford C-Max Hybrid, you know that the newest Prius rival achieved EPA-matching fuel economy numbers while in our safe keeping. And you want to know why, unlike most every other auto reviewer who has driven a C-Max, the numbers achieved by GCBC in this silver, almost fully-loaded C-Max Hybrid were in line with what Ford (and thus the EPA) estimates.

How did I do it? By not trying, of course.
To be honest, for 41.5 kilometres (25.8 miles) during my first of four city mileage tests, I did try. I drove the C-Max to visit my parents on the other side of the city, and I drove like my late grandmother drove her Plymouth Reliant around Tatamagouche, a town you won’t find unless you really zoom in on your Google map of northern Nova Scotia.
During that drive, the C-Max Hybrid consumed 1.922 litres of fuel, equal to 5.11 L/100 km. That’s 46 miles per gallon in U.S. speak, 55.3 if you’re measuring in Imperial gallons. I paid $1.371 for both those litres.
From that point on, however, I drove as I normally do. I’m not a speed demon. I don’t flout the law. It’s city driving, right? You’re not out there bobbing and weaving and juking and jiving. But I do tend to accelerate in such a way as to eventually lead the flow of traffic, and it’s hard to get the C-Max’s regenerative brake coach to always give you a 99% score. My braking wasn’t as gradual as the coach wanted, and I typically scored in the mid-80s.
Read: GCBC’s 2013 Ford C-Max Hybrid SEL Review
I love spewing the line, “It’s not what you drive, it’s how you drive.” It’s true. But you know what else is true? It’s where you drive. And it is a little bit about what you drive. The Chevrolet Volt that’s visiting GCBC right now has more than 7000 km on it, and without trying, I squeaked out 65 kilometres of electric-only power yesterday. In a car rated at 61 kilometres.

The C-Max I drove had around 4500 kilometres (2800 miles) on it already. Given the nature of the drivers who’ve been in it before, those weren’t the kindest of 4500 kilometres, but that’s plenty of time for an engine to get a feel for life. It’s more than enough time for an engine to get to know its battery, to marry well with its fluids and its continuously variable transmission. There is very likely a big difference between one brand new C-Max, and the mileage it will achieve in the hands of a fancy car magazine writer, and the mileage of another identical C-Max with more miles under its belt.

Test #1: Every single kilometer was in the city, on both sides of the Halifax Harbour. It’s hilly. There was plenty of stopping and going but very little traffic. Speeds ranged up to about 60 kmh. I filled up the C-Max at the same pump at the beginning and end of the test. 41.5 kilometres, 1.922 litres, 5.11 L/100km, 46 miles per gallon.

Test #2: This test was a serious disappointment, but it offered more proof that a short sampling period, maybe even a 215-kilometre sampling period, isn’t tremendously useful. We were in and out of the C-Max taking pictures in cold, downtown Halifax. The vents were blowing, interior lights were often left on and exterior lights left blinking. There were no high speeds, but the short bursts of two or three kilometres were probably done with a measure of aggression and rolling stops and poor braking technique. We drove 41.5 kilometres, about 10 of which were done at a steady 60 kmh cruise, and used 3.143 litres. That’s 7.57 L/100 km, or 31.1 miles per gallon.

Test #3: This test was the longest, and it again took advantage of lots of stop-and-go motion, the kinds hybrids love, but with little traffic. There was a bit of “freeway” driving on Dartmouth’s circumferential highway. The temperature was warmer, quite a bit above 0ºC. 59.4 kilometres were driven, 2.486 litres of fuel were consumed. That’s an absurdly low 4.19 L/100 km, or 56.1 mpg. 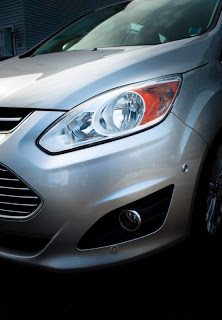 Test #4: With a little more driving on the circumferential, the C-Max enjoyed 85 kmh speeds for about 10 of this test’s 57 kilometres. Everything else was true city driving. It can be dangerous to glance down at the power meters often, but I didn’t need to: it was obvious from the lack of vibration that the C-Max was in EV mode for a huge part of this drive. 57 kilometres driven, only 2.002 litres consumed. That’s a ridiculously low 3.51 L/100 km, or 67 miles per gallon.

You know better than to come to conclusions based solely on four drives completed by one person in a city which may not be your own at a temperature you may rarely encounter. There was a bit of driving aside these four tests, as well. And the final tally of 215.5 kilometres on 10.837 litres of fuel equals 5.03 L/100 km, 46.8 miles per gallon on the U.S. scale, 56.2 Imperial mpg.

The C-Max told me that 108.1 kilometres of my time in the car was in EV mode. That would obviously be impossible for me to verify, but it can’t be far off. Highway time was limited, and skewed as well: much of it was at slow speeds in EV mode, not something that would happen if you were driving on the Pennsylvania Turnpike.

The numbers speak for themselves, and there are few conclusions which can be drawn aside from the fact that, unfortunately, “Your mileage will vary.”