Spending an extra $2205 on a loaded Buick Verano nets you a 2.0L turbocharged four-cylinder with 260 lb-ft of torque. That torque is produced early and often, from a low 2000 rpm. The base Verano’s naturally aspirated 2.4L doesn’t generate its comparatively paltry 171 pounds and feet of torques until the tach makes its way around to 4900 rpm.

The upgraded engine is of paramount importance in the Verano Turbo, and thus central to this test driven recap. Forget the Acura ILX, Audi A4, Chevrolet Cruze, and Buick’s own Regal. If you’ve got Verano on the brain, this powerplant rightly plays a major role in your thought processes, and the beaky Acura, relatively expensive Audi, commonplace Chevy, and suddenly pricey Regal fail to attract attention.

Don’t feel bad about knowing the engine’s specs off by heart. Compression ratio: 9.2:1. Actual displacement: 1998 cc. Horsepower: 250 at 5300 rpm. (Ahem… EPA fuel economy of 21 miles per gallon on the city and 30 mpg on the highway, 11.2 L/100km and 7.8 L/100km. GCBC’s Verano Turbo tester averaged 22.8 U.S. miles per gallon in mostly city driving, some of which involved heartfelt acceleration.) Regardless of its consumption, in such a mild-mannered car, the Verano Turbo’s 2.0L comes across as a mighty motor. 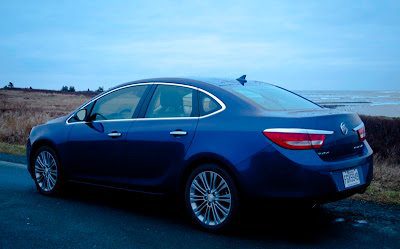 Buick is stuck in a funny place in the North American automotive landscape. Attempting to compete with premium players by undercutting the Germans and Japanese, Buick continues to carry the weight of baggage General Motors packed tightly less than a decade ago with cars like the Century and LeSabre. But does Buick represent cut-price luxury, or is a car like the Verano Turbo an expensive and very well-equipped competitor for Ford, Honda, and Volkswagen?

That’s a question only an individual consumer can answer. So like every potential Buick Verano Turbo buyer who is entranced by the sedan’s good looks, quiet interior, and authoritative engine, I found parallels not with the Acura ILX but with vegan cheesecakes and winter surfing locations.

In my youth, I enjoyed a medium-rare prime rib and old-fashioned sports like basketball and street hockey. Older and wiser now, I’ve expanded my palate and attempted to accept the X Games. When the husband of my wife’s cousins’ cousin (it’s a small world in the Maritimes) opened a cheesecakery in downtown Halifax, I knew I couldn’t tolerate the blow that massive quantities of cream cheese would deal to my gut after supper, so I stepped outside the box. Despite my upbringing – German cars, Liberal-voting suburbia, roast beef dinners, basketball hoop above the garage – the vegan peanut butter chocolate cheesecake at The Sweet Hereafter was otherworldly. I wasn’t supposed to like it, I didn’t want to like it, my mother would tell me not to even bother trying it, but I became an addict. 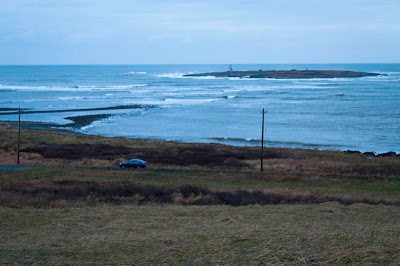 And while I’ve not expanded my athletic career to include surfing in the North Atlantic in December, I’ve explored the idea of skimboarding in the summer. GCBC Towers new location on the coast also provides us a chance to watch hypothermic accountants leave their day job after lunch to “get stoked” and catch “gnarly waves” at Minutes. Surely that’s not how they talk. It’s not how I talk. Besides, I’m supposed to be dunking on a 10-foot net by now, but I don’t even watch the NBA any more.

Yet now I enjoy accelerating in a Buick? Not just any Buick, but the smallest Buick? My mother drove a Buick… three decades ago. Like everyone else, she drives a Hyundai Elantra now. And based on what was going on at Buick P.E. (pre-Enclave), that comes as no shock.

To suggest that the engine is the only reason the new 2013 Verano Turbo provides a positive experience would be shallow and, in a way, demeaning. The car GM Canada sent my way for a week just before Christmas was enjoyable for a variety of reasons. Not surprisingly, driver comfort is at the top of the list. Aside from an abbreviated bottom cushion, the driver’s seat rates up there with Volvo’s typical top-notch chairs. The heated steering wheel, dual-zone climate control, swinging sound system, and easy control layout made a day of Christmas shopping around Dartmouth a pleasure.

Indeed, at all times, the instant torque wants to be made known, and I want to get to know it, too. But there is an overriding sense of serenity that stands in stark contrast to the accelerator pedal’s potency. It is very quiet in here, an is-the-engine-running kind of quiet; a we’re-doing-140-but-it-sounds-like-90 kind of quiet. Rough coastal roads that upset passengers in almost every other car go unnoticed. In this loaded $33,320 (CDN dollars) example, the navigation and backup camera assist in easing the mind while city lights brighten the interior via the sunroof. 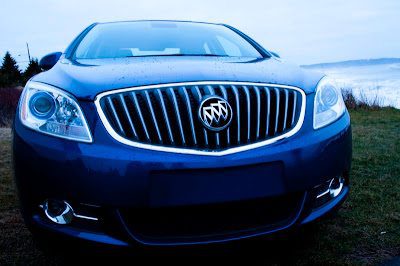 All this helped me forget about the offensive swathe of cheap black plastic that stretches across the right side of the dashboard. And the overwrought alumilike plastic. And the source button on the steering wheel that also acts as a next/previous track button. So help me Hannah, it never does what I want. And the two full-grown men in the back who would probably find a Cruze roomy in comparison. And the chrome strips which grew so much wider than the taillights. And even the Buick badge that was affixed to barges like the wood-panelled Roadmaster Wagon, which never mastered any road, and the Aztek-based Rendezvous, with which I hope never to rendezvous. Speaking of the Roadmaster, the Verano’s split A-pillar will hide one with no problem.

The turbocharged engine does nothing to erase the steering’s dead spot on centre. It’s vast. Some might find it hard to escape from the notion that powerful engines require track-like capabilities. This Buick surely has none, although so unpretentious is the Verano Turbo that it may just exceed your cornering expectations. Just don’t expect any feedback to help guide your way.

At $31,000, or $29Kish in the U.S., the Verano is sized awkwardly when stacked up against cars like the Volkswagen Passat and priced awkwardly when challenged by lesser small cars like the top-selling Honda Civic. If the Verano Turbo is a luxury car, as it’s obviously equipped, it’s awfully inexpensive luxury. For the customer who’s willing to look at it that way, this car is without peer. Fast, affordable, gorgeous, and luxurious?

Don’t assume that 250 horsepower a sport sedan makes. There are quicker cars, cars that complete the 0-60 mph task in five seconds, not six. There are certainly more efficient quick cars, too, none more famous than BMW’s 328i, which the Supreme Court has ruled, must be mentioned in every car review. It’s heavier (and a lot more expensive) than the Verano Turbo and features a 240-horsepower 2.0L turbo that’s rated at 23 mpg in the city and 33 on the highway.

As a subtle all-American hot rod and one of the best Q-cars available today, the 2013 Buick Verano Turbo is surprisingly and genuinely likeable, lacking any meaningful issues, free from any persistent annoyances, devoid of any substantial sacrifice. Of course, my Mazda-driving, BMW-loving friends don’t want to hear that. But they also refuse to try vegan cheesecake and still yearn for the return of the NHL.