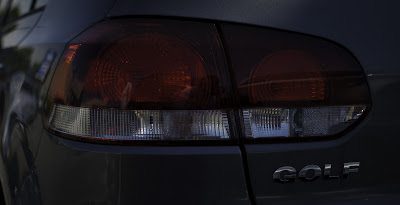 Volkswagen’s sixth-generation Golf is available in North America with three different engines, one of which is sold in two different states of tune. The most powerful, VW’s turbocharged Golf R, has garnered plenty of attention of late. The Golf R’s 2.0L turbo is detuned in the iconic Golf GTI. Impressive fuel efficiency and sublime torque can be enjoyed in the Golf TDI. GoodCarBadCar’s review of the Volkswagen Jetta concentrated on that same 2.0L turbodiesel.

And then there’s this car, the 170-horsepower 2.5L five-cylinder Golf. The regular Golf. The Golf that is most like other cars. The Golf that offers a distinctly lower monthly payment.
There is one significant issue with the gas-fired Golf. I was very conscious of this fact when I went to pick up our tester. While the oft-discussed TDI is rated by the EPA at 30 and 42 miles per gallon in the city and on the highway, the 2.5L, when equipped with a 6-speed automatic transmission, is rated at just 24/31. Not only does this compare unfavourably with its own diesel sibling but it comes up short of best sellers like the Honda Civic and Mazda 3 SkyActiv, both of which are rated by the EPA at 28/39 mpg.
If the Volkswagen Golf 2.5 is a relative guzzler of gasoline, and if the very same car can be had as a slow-drinking diesel, why are buyers at all willing to purchase or lease a Golf that doesn’t have a TDI engine under the hood? The initial answer to that question is obvious: in Canada, a 5-door Golf 2.5 Comfortline costs $2400 less than a 5-door Golf TDI Comfortline. In the U.S., trim lines don’t match up as directly, but buyers can expect to pay thousands more for the privilege of fuelling with diesel.
Indeed, there’s no denying the initial TDI-inflicted financial pain. Based on those Canadian prices, my local Volkswagen dealer makes it very clear that the price difference won’t be made up until the 80,000 kilometre mark.
We wanted to discover, however, if the 2.5L Golf is good enough to buy on its own merit. Let’s set aside the TDI’s long-term benefits and the 2.5’s short-term savings. Let’s temporarily ignore the TDI’s existence, if we can, and establish whether the conventional Golf is worth consideration. GoodCarBadCar’s review of the 2012 Volkswagen Golf 2.5L Comfortline Tiptronic starts after the jump. 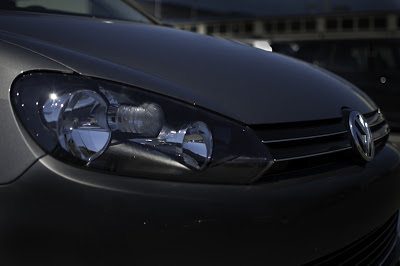 Characterless and seemingly lifeless at low revs, the Golf never feels rev-happy but it does feel quick. There’s no confusing the 2.5L’s 177 lb-ft of torque with the shove produced by the GTI’s turbo. Producing passing power while travelling in the 70-90 km/h range remains the five-cylinder’s favourite activity. The 6-speed doesn’t slot into gear like the Fiat 500’s sporting auto, nor does it smoothly slide into gear like the Chevrolet Cruze’s comfy auto, but shifts are sweet and not so quick as to be harsh. 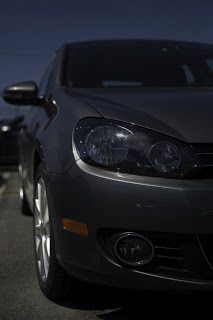 The Golf steers sweetly, and though we’re supposed to be ignoring the TDI, we have to acknowledge that the front wheels of this gas-fired model are much quicker to react and more communicative through the steering rack, as well. This isn’t a sporty car, but it enjoys being driven quickly, and it’s not hard to see why the Golf GTI, the car Volkswagen chose to make sporty, is so very good.

What sets the Golf apart from the Jetta and other small cars is the feeling of expense and class and charisma. Mostly expense. And it’s no wonder – the Golf is a pricey piece. In Canada, a basic 3-door costs $326 more than a very nicely equipped Hyundai Elantra GLS. Fitted with an automatic transmission, the Comfortline 5-door is $3030 more than an auto-equipped Mazda 3 Sport Skyactiv. And Volkswagen doesn’t even equip the Comfortline with Bluetooth or steering-wheel mounted controls unless you spend $1300 on an option package. The Golf’s sunroof costs $1400; the Mazda’s just $895.
Yet, even by the standards of what, at this approximate price point, provides leather-lined luxury and heated rear seats in a Hyundai Elantra Limited or slick-shifting pace in a Civic Si, the Golf feels like the more expensive automobile. These plastic and fabric choices would be appropriate in an Audi A4. Seat comfort is Volvoesque. Fortunately, the characterless engine is muted. There’s a semi-luxury ambience in the Golf Comfortline: “luxurious” because of the quality of what you can touch and see and savour; “semi” because of what isn’t there to touch and see and savour.
Personally, the idea of purchasing a Golf 2.5L when the TDI sits in greater numbers on the other side of the dealer lot would be difficult to reconcile. The actual diesel engine is, I’ll readily admit, more enjoyable to push. It’s also comforting to know that when not pushed, the TDI will possibly exceed its EPA ratings, whereas the petrol powerplant will struggle to match its ratings. That 80K mark seems a long way off, but immediately thereafter, the term “breaking even” disappears. You’ll start saving money.

In the meantime, a typical Canadian buyer’s payment on the TDI would be approximately $75 more each month. That difference is greater than the cost of a full tank of gas in the five-cylinder.

The math is an individual issue, something you’ll have to figure out with your own annual mileage. It became clear during my drive in a gas Golf that the attributes which make a Golf special are completely present here, just as they are in the TDI. These are spacious family cars with an image fit for any driveway in any neighbourhood, cars you’ll be happy to keep clean, drive swiftly, and call your own.
In terms of non-GTI VW hatches, the MKVI forms the basis for the best gas-powered model yet. The 2012 Volkswagen Golf 2.5 Comfortline isn’t the best value in the compact car class but it is certainly one of the best small cars on sale today. Its standing isn’t diminished by cheaper Japanese, American, and Korean sedans. No, the gas Golf is simply a stopping place on the route of VW consideration which leads to its nemesis, the Golf TDI, an adversary which rightfully garners additional attention, higher praise, and a greater number of thoughtful buyers.