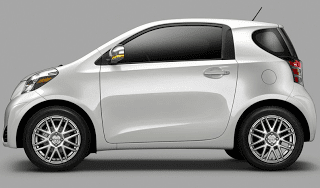 Fuel economy will play a major part in attracting buyers to the 2012 Scion iQ when the car is launched in the fall of 2011, but the EPA efficiency numbers aren’t as high as we all hoped. According to Scion.com where specs and on-sale dates are now available, the 2012 Scion iQ achieves 36 miles per gallon in the city and 37 miles per gallon on the highway in EPA testing.

What amounts to an average of 37 mpg for the 2012 Scion iQ isn’t bad. Indeed, it’s ever so slightly better than what smart achieves with the fortwo. But the makeup of the smart fortwo’s 36 mpg average results from a much lower city rating (33 mpg) and a higher highway rating (41 mpg). The 2012 Hyundai Accent, for more context, is rated at 30 mpg in the city and 40 mpg on the highway, for an official EPA average of 34 miles per gallon.

We’re also accustomed to ridiculously high numbers from Canada’s Office Of Energy Efficiency. When the OEE accidentally (incorrectly? prematurely?) posted numbers for the Scion iQ last year, and subsequently removed them, the 5.5 L/100km city rating and 4.6 L/100km highway rating compared quite favourably with the rating the OEE gives the smart fortwo: 5.9 L/100km and 4.8 L/100km. Since those smart L/100km numbers translate to a wildly optimistic 40/49 miles per U.S. gallon appraisal, it was obvious that those iQ figures were also awfully idealistic. But the 43/51 mpg results were substantially better than the smart’s on both counts.

Now we see official EPA fuel economy numbers for the 2012 Scion iQ that combine to be only a smidge better than the smart’s relatively humdrum numbers.

You can’t just up and assume that a potential iQ buyer will also consider the Chevrolet Cruze Eco for its 42 mpg highway figure. Fuel economy is far from the only issue here. The iQ is brilliant on so many levels, and early reports from AutoGuide, Inside Line, and Motor Trend will lead you to believe the iQ pleases in a variety of ways, ways in which no Cruze ever will.

Yep, it’s a unique car, this 94-horsepower, 2127-lb 2012 Scion iQ. Its most obvious rival, the smart fortwo, has been a failure in the United States. The iQ’s fuel economy foes are more fuel efficient in highway driving, even if the iQ is, on average, the most fuel efficient non-hybrid car on sale in America. On pricing and value grounds, another unique car sold in Chrysler dealers, the 2012 Fiat 500, has the iQ beat.

Granted, the iQ has something the smart doesn’t: a back seat. Moreover, not all driving is done on the highway, certainly not in the life of the typical iQ buyer. And contrary to popular belief, every North American new car buyer hasn’t fallen in love with the Cinquecento.

Finally, another admission from The Good Car Guy. Not only did GoodCarBadCar.net initially publish absurdly hopeful price estimates for the iQ (it’s going to cost $15,995), but this post will also tell you that the fuel economy estimate rose from 35/42 mpg in April to 37/45 mpg in November. Oops. Wrong again. Check out the 2012 Scion iQ’s Gallery of images below.