Not long after the Jeep began its brief foray into the Timberlea wilderness, I realized that I had not discovered a location challenging enough for the 2012 Wrangler Unlimited. At the same time, I also realized that no other vehicle I’ve driven in the last year could tackle this trail, a trail which didn’t have the potential for flustering the Jeep’s confidence or agitating the Jeep’s rhythm or disturbing its undercarriage.

Having swallowed only the smallest dose of caution, I had steadily travelled down a path that will some day become a main road in a new subdivision. Utterly lacking in surprises, the 2012 Jeep Wranger Unlimited Sport held me in air-conditioned comfort, soothing me with sounds from a fairly impressive 6-speaker audio system. Nothing happened. No skill was required. Nothing other than the Unlimited’s four tires came close to touching the ground beneath. It was Novak Djokovic repeatedly striking perfect cross-court backhands in practice, Steve Nash dropping free throw after free throw, a Ferrari 456 Italia unremittingly lapping Fiorano.

Hundreds of metres down the trail, however, the Jeep had only gone about proving what we already knew to be true: there’s nothing in this price range that’s as capable off-road as a Wrangler. Indeed, there are very few products in any price range more capable off-road than the Wrangler. Thus, in truth, the Jeep Wrangler Unlimited’s main competition might just be the regular-wheelbase Wrangler.

This amounts to nothing you haven’t heard before. Recognizing that fact, the Pentastar-engined Unlimited Sport was turned around and taken back toward paved paradise. At a higher rate of speed, naturally. It was at that point that a proper real-world test drive of the improved Wrangler began. Read on after the jump for GoodCarBadCar.net’s full review of the 2012 Jeep Wrangler Unlimited Sport.

It isn’t fair to compare the Jeep’s on-road mannerisms with the demeanor of vehicles like the Honda CR-V, Hyundai Santa Fe, or Ford Edge. It’s not fair to the other vehicles, either. The Jeep can go places the others don’t dream of discovering. It’ll also take more stuff on its way there. The Jeep Wrangler Unlimited has the largest cargo area of any exclusively-two-row SUV on sale today.

Let us then pay attention to a few unfortunate characteristics the Jeep will reveal to any test driver, traits which won’t be likely to make themselves known when driving CR-Vs, Santa Fes, or Edges. First, at highway speeds, it becomes patently obvious the Jeep Wrangler is shaped like a brick. If this vehicle were equipped with the sound deadening from a Lexus LS460 and the window seals from a Buick Enclave, it would still be noisy. The tires, for one thing, are humming away like a 1950s Hollywood actor who can’t sing but happens to be in a musical. The tires, nevertheless, only represent a small part of the problem.

Blame the air you breathe, tons of which hit the Wrangler’s square front end. Much of that air devotes itself to slowing the Wrangler Unlimited, a goal which goes unmet now that the Wrangler’s 3.6L V6 generates 285 horsepower. The remaining wind gusts just make noise, as air winds its way through nooks and crannies you’ll desperately wish didn’t exist. The wind begins to whistle in places you haven’t heard wind whistle before, most notably  emanating from the edges of the removable hard top.

This problem isn’t being overstated. For the Jeep faithful, the 2011 and 2012 Wranglers represent a leap forward in refinement. Noise, vibration, and harshness – at least to owners of old Jeeps – has been virtually eliminated. While the 2012 Wrangler Unlimited’s engine is distinctly smooth, wonderfully effective under full throttle, and relatively noiseless compared to the old 3.8L, drivers of conventional vehicles will inevitably return to their own cars, vehicles they’ll now consider sound proof chambers.

The second Wrangler Unlimited problem relates to the way it drinks. Though wildly more efficient than the 2011 Wrangler, and rightfully praised for that improvement, the Jeep Wrangler is still thirsty like a pickup truck. With a 5-speed automatic, a 2012 Jeep Wrangler Unlimited Sport just like the one I drove is officially rated at 16 miles per gallon in the city and 20 miles per gallon on the highway. (Natural Resources Canada calls it 13.2 L/100km in the city and 10 L/100km on the highway, scarcely believable equivalents of 18/24 mpg.) Yep, that’s better than the 13/19 mpg rating given to the Dodge Ram 4×4 Hemi V8, but there’s a couple of key differences. 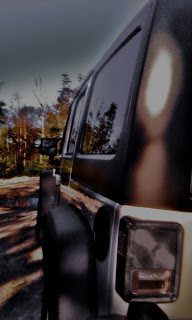 For starters, the Ram Hemi carries a freakin’ Hemi. So there’s that. Also, the Hemi makes its 390 horsepower at 5600 rpm and its 407 lb-ft of torque at 4000 rpm. That’s 105 extra horsepower at 800 fewer rpm and 147 more lb-ft of torque at 800 fewer rpm compared with the Wrangler’s V6. In other words, if you really want to enjoy the Jeep’s new-found power, you’ll frequently find yourself placing the throttle pedal closer to the floor. By doing so, mpg numbers will fall. It will fall hard and fast. The 16/20 mpg you were expecting will form part of a Christmas wish list. I’m pretty sure I actually watched the the needle move like the second hand on a clock, at least as fast as the minute hand.

To sum up the Wrangler’s problems, you move on to its handling. Not its ride and handling, just the steering/gripping/turning/coping-with-great-roads part. The long wheelbase contributes to the Wrangler’s comfortable, relaxed, loping feel that you used to get in a whole bunch of vehicles before the Nürburgring was used to develop off-roaders.

The Jeep’s handling, if that’s what you want to call it, isn’t so admirable. Using the term “handling” implies that the Jeep Wrangler Unlimited is in fact handling something. The steering, well, I think it’s connected to something. But on a twisty road on your first outing in a Wrangler, boys, you’ll be convinced that the wheel is sending messages through a government bureacracy. That takes time, yo. And this group of civil servants doesn’t seem to like Jeep Wrangler drivers. They put up enough red tape to attract the bulls of Pamplona.

Eventually, just as you’re sending the fourth message through the wheel (assuming they didn’t receive the first three facsimiles), just as the Wrangler Unlimited feels as though it’s going to scrub the gravel shoulder, all becomes well again. Stable and straightened; level and loping. At least until the next corner. Which you can see already. And it’s a bit bumpy, half in the shadows of tall trees, half in the brightness of early evening sun, more than a little off-camber.

So you return to the city, the urban playground, the Jeep Wrangler Unlimited’s second-favourite place. It seems strange for a vehicle which was originally developed for war, but the Jeep’s omnidirectional visibility, the comfortable chair-like posture its seats afford, its natural top-down state, and even its squirtable power combine to make traversing city streets a breeze. The Wrangler Unlimited really isn’t all that large: 5.5 inches narrower than a Dodge Ram 1500 Quad Cab, 3.4 inches shorter than a Chevrolet Equinox, 1.9 inches lower than a Honda Pilot. Let’s not forget, everybody feels cool in a Jeep, even the people who will never actually look cool.

Don’t attempt to convince yourself that the purchase of a 2012 Jeep Wrangler Unlimited doesn’t come without sacrifice. Poking holes in that theory is as easy as popping your annoying nephew’s balloon. Also, don’t convince yourself that those sacrifices aren’t worth it. Jeep offers a Wrangler Unlimited that’s fun, stylish, capable, and affordable; a package so unique that rival automakers don’t even bother conceptualizing alternatives. The Jeep Wrangler is the alternative, the antithesis of every other vehicle on sale. 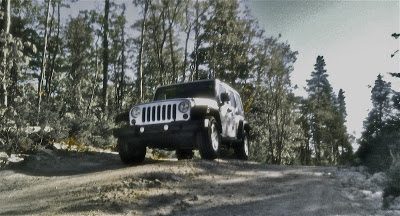 Windows were cranked. Doors were locked manually. Wind whistled. Gas was guzzled. Corners were not carved. Rear seat passengers, had there been any, wouldn’t have had nearly as much space as you’d expect given the vast cargo dimensions – 86.8 cubic feet with the seats down.

Yet, believe it or not, in the types of daily driving undertaken by those who operate under the GoodCarBadCar.net umbrella, the 2012 Jeep Wrangler Unlimited would excel. But that’s not with this is about. Jeeps, real Jeeps, are perfect and even necessary for some new vehicle buyers but woefully inadequate for others. Only you can ascertain that information.

If you can make the sacrifices, if you need to make the sacrifices, if this vehicle is adequate, if it isn’t too over the top, then the 2012 Jeep Wrangler Unlimited is easily the best and most tempting Wrangler ever. That fact is borne out by the huge sales figures being racked up by Jeep both in the United States and in Canada. A comfortable convertible that will take you anywhere in any season is hard to argue with, even if you do need to peform hand contortions in order to unlock the rear doors.