GoodCarBadCar.net’s official reaction to Volkswagen’s Times Square debut of the 2011 Jetta is actually fairly favourable. Much of the style analysis you’ll read below won’t convey that fact, but remember, every car should be judged based on the price for which it’s sold. The segment(s) in which the 2011 Volkswagen Jetta will compete come October aren’t exactly chock full of handsome sedans. That the Jetta is somewhat bland and rather unexciting on the design front means little in light of vehicles like the *yawn* Toyota Corolla and the dated Honda Civic.

While we’re at it, let’s get another couple things out of the way before we dive head-long into the style analysis. The 2011 Volkswagen Jetta looks like a perfect fit for a SportWagen derivative. As you know, once the 2010 Volkswagen Jetta received proper front-end treatment, The Good Car Guy couldn’t help but throw the Jetta TDI SportWagen into The Good 12 v3.0, the highest of honours on GoodCarBadCar.net. This new Jetta appears slightly boxier, a little more square and Volvo-like. The clean front-end and slab sides could work very well when forming the squared-off rear of a wagon.

However, it’s still an awfully good thing Volkswagen was able to announce a huge price drop for the 2011 Jetta. Without a price cut disappointment over Volkswagen’s complete lack of imagination would have run rampant. Have you ever seen disappointment run rampant? It ain’t a pretty sight. Nevertheless, Volkswagen has cut the U.S. base price of the Jetta by almost 10%. At $16,000, the 2011 Volkswagen Jetta is only a few hundred dollars more than a current Honda Civic or Toyota Corolla; more than $11,000 less than the current Volkswagen Passat. By chopping the price and stretching the car, it appears as though Volkswagen has stopped playing the role of awkward middle man (priced like an Accord while competing with the Civic) and pulled a Hyundai – priced like a Civic while acting as a viable competitor for the Accord.

Yet the looks aren’t up to snuff, particularly when compared with the 2012 Ford Focus or the next Hyundai Elantra. Find more on the Jetta’s style and loads of 2011 Jetta pictures in the Gallery after the jump.

Seen from the front, the 2011 Volkswagen Jetta is clean and crisp. “Clean and Crisp” is the friendly way of saying, “Nothing grabs my attention; nothing offends me.” It’s not as though the 2011 Jetta’s headlights are pure rectangles, there’s just so much running horizontally that one thinks that deep inside the Jetta you’d find clenched teeth; a mind filled with angst over the desire for a little plastic surgery. Fortunately there’s no excess chrome or anything that could annoy: just an overarching sense of width. 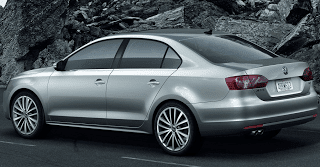 Now to the rear. Although this view isn’t perfect, you can’t help but see the Audi connection. The 2011 Jetta’s growth is so much more pronounced in pictures than in reality – the car has only grown 3.54 inches in length. The end result has the Jetta carrying off a bargain Audi A8 look from the rear, not a bad thing I suppose. From the outside-upper edge of one taillight to another is a pretty little arc under which the iconic VW logo rests. Note the reflectors above the exaust pipes over which light is trapped. That trapped light is a result of a crease across the lower part of the rear bumper. An identical crease is also seen a few inches higher. If these lines were less distinct the 2011 Jetta’s rump would seem gigantic. Sadly, the lower crease is carried forward along the side of the car too strongly….

Which leads us to the 2011 Jetta’s profile. This is where the 2011 Jetta is most easily labelled “clean and crisp” while also being the view on which criticisms of blandness can find a comfortable home. In fact, if there’s a place where the 2011 Volkswagen Jetta looks an awful lot like the 2010 Volkswagen Jetta, it’d be the profile view. It’s all subjective, of course, but the profile view is where the previous Jetta was a complete letdown from the 1999 Jetta. See, in 1999, the Jetta was bland at the front and boring at the rear but really rather gorgeous from the side. Simple, yes, but in a dramatic way. This 2011 Jetta has the 2010’s gentle rise which provides a disturbing lesson in front-wheel drive proportions. Plenty of rear-wheel drive cars feature a gentle rise toward the rear of the beltline and trunklid, but it can be carried off because of the position of the front wheels. Volkswagen’s 1999 Jetta made the huge front overhang tolerable because it was confident in its own flanks. Volkswagen’s 2011 Jetta has moved away from the 2010 Jetta’s blaa for sure, but not quite enough for my tastes.

Opening the door to find a cabin like this would be exciting for the owner of a $16,000 car. Strip away some of the luxury fittings (and the four handsome wheels) to spot a car that would actually sell for $16,000, we can assume. We expect a lot from a VW/Audi interior these days and Volkswagen has pulled it off nicely, whether this is an example of a $16,000 Jetta or a $21,000 Jetta. There’s an all-of-one-piece sense to the 2011 Jetta’s interior, as though the dashboard and instrument panel and glovebox all grew naturally out of a solid chunk of…. whatever interiors are made out of. This Jetta’s interior looks like it belongs in a more expensive car, and not just because of the beige leather or navigation system. This is a mature interior: classy, straightforward, and united. Everything fits with everything else.

Now back to that price cut. If a U.S. drop of approximately 9.7% is anything to go by, Canadians can expect the price of a new Jetta to go from 2010’s $22,175 to around $20,024. It seems obvious that Volkswagen would strive to get the car under the $20K barrier to about $19,900 or make optional equipment that is otherwise standard in the U.S. That way the 2011 Volkswagen Jetta could be closer to the $15,990 Honda Civic (a car which is barely jacked up for Canadian customers) or the $15,460 Toyota Corolla, a car which features a base price only $10 more than its U.S. equivalent.