Volkswagen, as people’s carish as they might be, have always been a bit… out there. To their credit, a rear-engine car that looked like a bug was a fair success. I acknowledge that adding a turbo and supercharger to the same engine has worked out well.

And so it would be foolhardy to suggest that VW would never consider building the GTI W12-650. If I say they’ll never put the car into production, and then they build 25, I’ll get rude emails.

This car is out there. Somewhere out there. Very far away from here. It is likely one of the coolest Volkswagens ever beheld – certainly one of the most visually striking. Volkswagen Rabbit/Golf GTI’s traditionally come with a 4-cylinder engine. The current production GTI has a small four with a turbocharger to create around 197 bhp and more than 200 lb ft of torque. The R32 is a four-wheel drive Golf/Rabbit with a V6 engine that does indeed go faster, but also carries more weight.

Wondering how all this transpired? For starters, the engine is where the kids normally sit and the driven wheels are now the two rear most, rather than the front axle. It is safe to assume that just about everything you can’t see underneath the body of this car is very different from a garden-variety GTI. Even what is visible has been changed indelibly. A gaping mouth; massive fenders; scoops ahead of the rear wheels – everything more aggressive and pronounced.

Verifiable top-speed numbers haven’t been tested for yet, but Volkswagen says the W12-650 is safe for 202 mph. Theoretics say that you could travel 7,800 km in a day, without fuel stops and regular diesel Golfs hogging the passing lane.

This isn’t the first time a middle-sector automaker has gone crazy with their bread-and-butter hatchback. Up un

til recently Renault sold the Clio V6. Renault’s Clio is a tiny little car, and its performance editions are widely regarded as the best hot hatchbacks you can buy – if you live outside of North America. The typical Renaultsport Clio 172 was not enough for some of the crazier French engineers, so they converted the Clio chassis to rear-wheel drive, put a V6 where the rear seats were, and sold the car for about five years in two slightly different forms. Renault did the 5 Turbo back in the 80’s as well.

Before MG Rover was sold to Chinese manufacture Nanjing, they converted the 75/ZT from the typical front-drive, four/six cylinder into a rear-wheel drive V8. Taking a Ford Mustang engine and slotting it where the engine originally rested, but switching the drivetrain to power the rear wheels created a pretty decent car. It was nothing near as crazy or extreme as what enthusiasts had hoped for.

Volkswagen has stepped it up a notch. Double, even triple the number of cylinders. Triple the power. One reason for making such a wild concept car include Martin Winterkorn’s desire to revive the image of the brand. Another reason could well be, “We just wanted to have fun.” 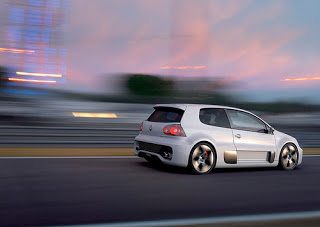