Corvette evolution never ceases to amaze. Overlook technological revolution, without ignoring it altogether, but steadily improve the breed by tweaking and tuning. Every few years give us a major overhaul, but without breaking away from the past.

Give us overhead valve engines of massive displacement even as others offer tidy six cylinders and V8’s that rev to the moon. Stick with a balsa wood floor when all around is new material. But, make that V8 of your own rev higher than an 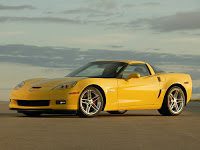 y human thought possible and mix in some magnesium and carbonfibre when you can.

Show the Europeans that amazing performance does not necessitate out-of-reach pricing. But… do go ahead and make the car more and more expensive. Stick with the annoying skip-shift manual, but eventually (fiiiiiinally) offer a 6-speed automatic for the pretenders.

But most of all, when all vehicle engineers seem to be forced to concentrate on fuel economy, give us an increasingly more powerful sportscar that can, and will, return high-20’s on the MPG scale. Increasingly powerful? Oh yes.

The 2008 Corvette makes gains of 30 horsepower (to 430) and 24 lb-ft of torque (to 424) by using a 0.2 litre larger engine. There is no replacement for displacement. Want some more noise? Opt for the dual-mode exhaust and you gain six more horses with the better breathing.

Check out CorvetteGuys.com and
their large inventory of Z06 Wheels

Interestingly, the new Corvette’s power level still does not look impressive when put shown as horsepower per litre. At 70 bhp/litre for that free-breathing ’08 and 72/litre for the Z06, the Vette can’t compete with the old M3 which produced over 100 horses for every litre of displacement. Granted, the new hi-po Mustang, Shelby GT500, doesn’t touch the old or new M3 either. And that’s with the aid of a supercharger.

What doth it matter? The Vette is constantly improving in every way.