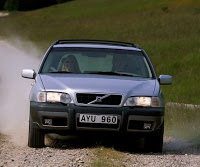 Expect Volvo’s sport-utility wagon to fill up the pages of GoodCarBadCar.net over the next week or so. Volvo Canada is to be placing an XC70’s key in the hands of The Good Car Guy and a place underneath GoodCarBadCar Towers will be filled by the large wagon. You can read about the XC70 all week by checking back at GoodCarBadCar or by bookmarking this XC70 label.

Volvo and wagons: like BMW and sport sedans, Ferrari and front-engine V12s, Sweden and inexpensive contemporary furniture. Late last decade, Volvo followed Subaru’s lead into a segment that made so little sense to so many people but was the perfect antidote to lumbering SUV dynamics and excessive fuel consumption. The original Volvo V70 XC was frequently labeled as the Cross Country and possessed few direct competitors. Audi brought the A6 Allroad in at the top end and the Outback dealt below.
(Check out AutoEnergy’s fuel efficiency comparison of the new XC70 and the turbocharged Outback)
Modern EPA ratings place the first-generation Cross Country at 16/22 in city/highway miles per gallon ratings. Time has moved on as time tends to do. 190 horsepower and a 4-speed automatic don’t speak luxury anymore.
For North America, Volvo used 2001 as an XC70 rebirth. Much improved in structural integrity, the Volvo was – of course – safer. A slight power increase (to 197) was furthered by a 5-speed automatic. Many of the second-generation XC70’s colour choices manifested its SUV-like enhancements more definitively.  Fuel economy improved by about 1 mile per gallon. The Good Car Guy spent large amounts of time in an XC70 and discovered a truly livable car. Pleasing to drive; but not fun. Supremely comfortable to ride in; never anything but that. Cavernous carrying capacity did not make itself known in the on-road experience.

Speaking of fuel economy, the story isn’t quite as nice on the third-generation XC70. On the other hand, power is up, and for 2009, available power is way up with the T6. Volvo has given the XC70’s tranny six speeds which, with 235 or 281 horsepower, is more than enough for easy travel.