Be doubtful of the fact that Volkswagen isn’t pleased, deep inside the heart of the company, that images of the upcoming Scirocco were leaked ahead of its auto show debut at Geneva.  These sorts of things contribute to the hype a car generates and simply provides more chit-chat on automotive forums.  How can this hurt?

VW designers have stayed remarkably true to the IROC concept from last year but obviously lost overt show car elements like the massive wheels and the bellicose front end.  It’d be nice to see this image in another shade, but there’s no denying that even in a silvery-white; the Scirocco is in impactful design .
Alas, Volkswagen of America doesn’t like what the Scirocco would do to GTI sales.
The Good Car Guy whined, but six weeks later news was still bad. On that front, nothing has changed.  Let’s hope it does. First words out of the mouth of The Good Car Girl when she saw the pics: “I’d buy that.” 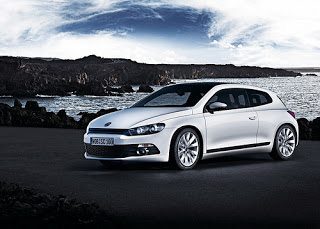