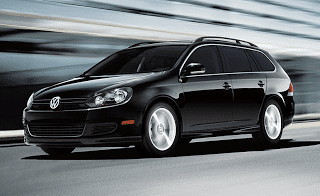 Just before The Good 12 Supersize v2.0 begins, another wagon creeps into The Good 12 v3.0. Along with the BMW 3-Series Touring, Cadillac CTS Sport Wagon, and Toyota Venza is this, the Volkswagen Jetta SportWagen TDI. On the heels of vastly improved front fascia styling and small but meaningful changes underneath its skin, the new Jetta SportWagen TDI is definitely worth consideration as a new car purchase in 2010.

Don’t fool yourself into believing that, as a turbodiesel, this Jetta SportWagen TDI is going to save you bucketloads of money. On the surface, Volkswagen doesn’t really sell value anymore. First, you pay a healthy sum for the vehicle. Then you pay a little extra for wagonized utility. Okay, now fork over some more hard-earned cash for the diesel option. We’re not in Honda Civic territory now, are we?
In fact, we’re not even close. This ignores one of the biggest reasons-for-buying people discover on a Volkswagen test drive: feel. While it’s true that Volkswagen wants an awful lot for this car, you’ll feel like you’re driving something worth an awful lot. Knobs, switches, buttons, and materials all feel as though they came from a much more expensive vehicle. The lack of vibration through the pedals are more reminiscent of the class above than the class below. Besides, people in those little cars with their alleged 30 mpg ratings have to stop for gas sometimes. In the Jetta SportWagen TDI, pulling over for a fill-up occurs little more than every 400 miles or so…. in city driving.
There’s much more to the Volkswagen Jetta SportWagen TDI than the TDI engine. Every review of this VeeDub doesn’t need to be limited to two topics of discussion: efficiency and emissions. Diesel-burning Jettas are fun to drive; 236 lb-ft of torque makes sure of that. Jetta SportWagens provide the atmosphere of a luxury car without the luxury car price and without a handful of luxury car accouterments. On the plus side, Volkswagen’s Jetta SportWagen TDI happens to burn only a little fuel and does so with the planet’s hygiene in mind.
—–
Engines: 140 horsepower; 236 lb-ft of torque from a turbodiesel 2.0L inline-four
Base USD Price: $25,060
City Mileage: 30 mpg
49th Parallel: What’s with the naming conundrum? The 2010 wagonized version of Volkswagen’s small car rides on the sixth-generation platform of the Volkswagen Golf. Plans are afoot for the Jetta, still a Golf MkV car, to fill a lower-priced role as a smaller car in the near future. It appears as though Volkswagen Canada decided to market the new wagon as the newer, better car that it is, seeing as how it rides on improved fifth-gen Golf architecture. No longer a Jetta in Canada, the wagon is now the Golf it’s kinda-sorta always been. Volkswagen of America stayed the course.
CLICK HERE FOR THE GOOD 12 v3.0 PART XI
CLICK HERE FOR THE GOOD 12 SUPERSIZE v2.0 PART I