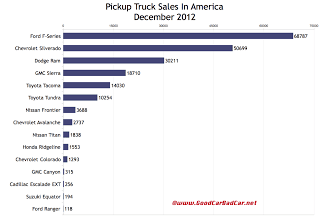 America’s acquired a truckload of pickup trucks in December, as the six most popular all posted year-over-year gains. Eight of the top ten trucks sold more often in December 2012 than in December of 2011.

Of course the F-Series was America’s top seller. And of course GM took this one last opportunity in 2012 to use its twin powers to outsell the F-Series, by 622 units.