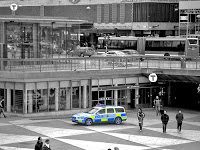 UPDATE YOURSELF WITH THE LATEST CAR TALK

As North American law enforcement loves the cheap and

tough Ford Crown Victoria, so Europe (especially the UK) loves its Volvo V70. Volvo has just debuted its new cop car iteration based on the very new civilian V70. So much cooler than any Crown Vic. See GCBC’s take on what cops should be driving by clicking here. …….

Chevrolet sells two different vehicles named Aveo in Canada and the USA. And I don’t mean sedan and hatchback; although its true that both configurations are significant. But in reality, the sedan which is presently offered to North American customers is light-years ahead of the hatchback in terms of tech and engineering, not to mention exterior design. For Europe (and hopefully for us), a new Aveo hatchback was just introduced. The Korean-based product is features a much more aggressive Chevrolet face……
Kia wishes to further enhance its image, and the thrust toward sportiness will never be believed until a vehicle in sporty configuration debuts. At the forefront of Kia’s design team is Peter Schreyer, once an Audi designer. He has been tasked with producing a stylish sporty coupe to build a foundation for sportier versions of Kia’s mainstream automobiles. Says he: “I believe this concept car could be a ‘landmark’ vehicle in Kia’s history and I wanted it to appeal to the widest possible audience. This design is not the result of self-indulgent design excess. It incorporates a host of elements that will become the new face of Kia right across our product range….” So far, only the profile of the sports cars appearance has been shown, but the whole car should be revealed at the Frankfurt auto show….

Chery, one of China’s best-known automotive brands, is extending its reach into Iran. Up until recently, Chery was simply a partne

r of Chrysler and Fiat; but now it can be spoken of in association with Kerman Khodro and Iran Khodro. A subsidiary of Iran Khodro already builds old Peugeots and a Suzuki 4×4. In this $370 million deal are players Chery (30%), Iran Khodro (49%) and a Canadian group named Solitac, who’ll posses 21% of the group. One of Chery’s cars will be built at a plant in northern Iran owned by this agglomeration. Another Chery has a 4-month waiting list at present. The Chinese company also builds cars in Malaysia, Uruguay, and Egypt and builds cars for Chrysler and Fiat in China…..

Toyota’s 8.7% stake in Subaru owner Fuji Heavy Industries may soon pay off for consumers. The two companies have a joint initiative to build a small and inexpensive sports car. Featuring Subaru hardware like a boxer engine and all-wheel drive, the sports car would still, most likely, wear a Toyota badge in Japan…..
Finally, J.D. Power’s dependability study shows Lexus in a tie for first. With whom, might you ask? That’d be Buick. In fact, Cadillac; Mercury; and Honda rounded out the top five. Land Rover was the bottom-feeder. Remember, this study looks at 3-year old cars and the problems they’ve faced. Buick and Lexus were tied at 145 problems per 100 vehicles. Land Rover nearly hit 400 per 100. Oddly, two Oldsmobile’s led their respective classes – minivan Silhouette and the SUV Bravada. Oldsmobile’s death was announced when the Bravada debuted. The three Buick’s which topped their categories are all out of production: Century, Park Avenue, and Rainier.