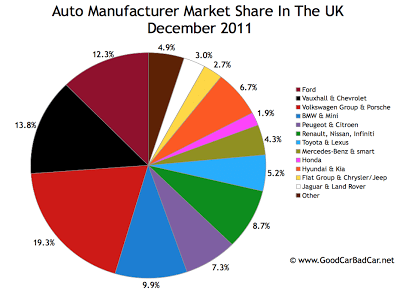 Home
Top Level Reports
Brand Marketshare
Brits acquired slightly less than 120,000 new cars in December 2011, down 1.8% from December 2010. Ford surrendered its normal top spot amongst automakers to Vauxhall, sales of which tumbled 5%. Year end numbers have Ford out in front by more than 30,000 units.

The best-selling premium brand in the United Kingdom in December was BMW. Fending off a surging Audi couldn’t have been easy, but the blue and white propeller-badged German brand beat the four rings by 1225 sales. Audi topped Mercedes-Benz by 1495 sales.

Honda, the global whipping boy after a 2011 which never went its way, finished December in 18th spot, behind Land Rover, Skoda, and Mini. That’s not a good thing. Honda sales were down 41% in the UK in December.

In the key two-player battles, Hyundai easily beat Kia. The same could not be said for Hyundai in November. Aston Martin topped Bentley by two cars in the battle of British execu-cars. As for VW underlings, Skoda beat Seat. Among the French, Peugeot nipped Renault; Citroen was third in that group.