June of 2007 will be forever remembered as a real doozy for General Motors, quite awful for Ford Motor Company, and not nearly as terrible for Chrysler. All three had disappointing months in sales, although Chrysler had comparably ‘good’ news.

Previously named ‘The Big Three’, Detroit’s automakers struggled with higher fuel prices than June of ’06 which causes an inevitable drop in large SUV and truck sales. (A bigger problem than the drop in sales of the large trucks and SUV’s is the fact that those are the worst vehicle categories in which GM and Ford can suffer declines. They offer the largest profit margins and support ‘car’ R&D.) For the purposes of full disclosure, do remember April’s post regarding Detroit’s desire to free themselves of fleet sales dependence.

One General Motors spokeperson also suggested that last June’s huge 72-hour sell-off could make this June look worse than it really was. Attempts have also been made to manumit the Chevrolet Silverado and GMC Sierra from heavy incentives. At the same time, Toyota increased incentives, such as 60-month zero percent financing. Silverado and Sierra sales dropped 20 percent – June over June. That sucks. These are GM’s new full-size pickups, the prime of their product lines. GM laid about $3,600 on the hood of their two trucks, whereas Toyota had $5,000 on the Tundra.

Saturn’s Outlook and its crossover brethren, the GMC Acadia and good-looking Buick Enclave, are apparentl 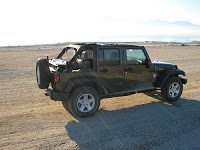 y selling faster than the factories can build them. Overall, General Motors were 21.3% lower in June of 2007 when compared with June of 2006.

Ford was pushed to the ground, but not kicked nearly as hard. Sales were down 8.1%, which George Pipas attributed solely to their reduction in sales to rental companies. Chrysler’s car sales went up 55% but plummeting truck sales negated any possible gains. Ironically, Chrysler suggests the jump was caused by their emphasis on fuel efficiency in ad campaigns. The reverse seems to be true as well – the obvious awkwardness of emphasizing its truck’s inefficiency. However, Jeep sales rose 19% June over June. The new four-door Wrangler is a big help. Inefficient or not.

Japan’s big three produced and sold vehicles at a furious rate this June. Nissan sales were up 22.7%; Honda sold at an 11.5% higher rate; and Toyota realized a 10.2% increase. Honda’s Civic, Fit, and CR-V sold especially well in June. That would be their two smallest cars and their small sport-ute. Sales of America’s favourite car, the Toyota Camry, were up by a dozen and a half points.