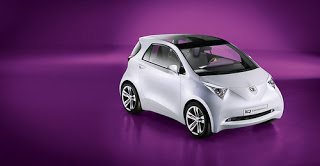 In Volkswagen’s homeland of Germany, Toyota crashed the launch of the up! with the iQ. Two oddly named vehicles; two vehicles destined for success – if produced. Toyota says the iQ will seat four in a 3+1 shape, but the fourth seat can be switched around to better hold cargo. This car is 30 inches shorter than Toyota’s own Yaris. GoodCarBadCar’s test drive of the Yaris is coming soon, but our experience with the Yaris proved to be a spacious one. Chop off 30 inches and I’m not so sure the rear passenger compartment has as strong a chance. We’ll see.

The [longhand] intelligence Quotient is Toyota’s “intelligent solution to urban transport”. Sounds like a smart fortwo attack. It’s not nearly as curious or conspiratorial as you might think. The Frankfurt show has been full of hybrid talk and other high efficiency technology (see GCBC’s take on that here) and there’s nothing better than small cars to create large efficiency. intelligent Quotient’s interior is very creative and eclectic. The exterior one-ups Volkswagen’s up! on contemporaneity and urban chicness. The up! may prove to be a more lasting design; perhaps like the iconic Beetle.