With the advent of the Ford Explorer, sport-utility vehicles became everyday family transportation. Sure, others had come before. Jeep, Land Rover, and GMC were already in existence as purveyors of trucks and SUVs only. Others, including Ford, sold some form of a closed-in truck. But the Explorer made the sector. SUVs have been compared and contrasted with it ever since, regardless of its competitiveness.

However, the strength of the American SUV market is meeting its match on two fronts: fuel prices and environmental social conscience. During the first three months of 2008, sport-ute sales have tumbled. Oh sure, the totals are still huge, but the percentage drops are frightening for those companies that pay their workers (and CEO bonuses) with the profits from large SUVs.
He who argues that hundreds of thousands of SUVs sold so far this year indicates stability is likely the same person who thinks the lowering casualties in Iraq means the still populous middle-aged Iraqi male population isn’t exposed to dangerous circumstances. Here are a handful of SUVs facing quickly fading sales. And yeah… I know this is more of a Bottom 5 than a Top 5. Live with it.
—– 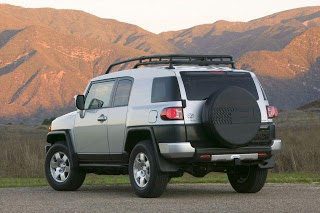 #5 – TOYOTA FJ CRUISER: -38.5%
A relatively low base price and eye-catching angles can’t propel this unique Toyota over the persisting trend. The FJ Cruiser’s brick-like shape doesn’t aid fuel thriftiness, with a city mpg number of just 15. Ouch. During January, February, and March, the FJ still posted better sales figures than any of the other members on this list.

This does NOT go to show that the profiency of cylinder shutdown systems is lacking. The Jeep’s fuel economy isn’t good. The cylinder shutoff can’t overcome that. Nonetheless, one would assume that a 30mpg Commander would struggle to sell. It’s ugly and discontinued.

Although the Outlander’s drop isn’t as severe as the Kia already mentioned, the 44% fall compared with last year’s first quarter does put the Mitsu’s sales total lower than the Kia’s. Mitsubishi can’t rightly blame the small SUV market share free-fall. The percentage drop for the Outlander is 15 points worse than the sector it competes in.

The Sorento sits on an ageing platform and performs with LR3-like mileage. Nail. Coffin.

Though the Land Rover’s drop only equals a couple thousands fewer units sold over three months, this puts the LR3 on pace for just 5,208 sales over the course of the year. Even the six-cylinder LR3’s mileage is shameful; just 16mpg in the city. The Good Car Guy’s drive of the LR3 revealed a terrific vehicle, but with quality problems, poor fuel mileage, and an expensive base MSRP. This Land Rover is in for a rough ride.