The automotive marketplace isn’t a popularity contest. Oops, actually…. it is.

Within the hallowed halls of GoodCarBadCar Towers – halls that don’t actually exist, mind you – labels compete for readership. Not surprisingly, looking back to the first day of summer up until this moment, labels that appear inside readers’ Firefox, Explorer, Safari, or Chrome browser most frequently relate directly to that which is good and bad. Below you’ll see the most popular. Click their titles to go to the page.
—–
#1 – THE GOOD 12: Released just before Christmas in 2007, The Good 12 is The Good Car Guy’s list of the twelve cars real people should be driving in the real world for 2008.
#2 – THE BAD 8: Released just after Christmas in 2007, The Bad 8 is The Good Car Guy’s list of the eight cars people shouldn’t be driving in 2008; and that goes for fake people and fake worlds, too.
#3 – XC70: In August, Volvo of Canada generously loaned The Good Car Guy a Volvo XC70 T6. He drove it much and wrote about it even more.
#4 – 0-60: Each month The Good Car Guy tracks the acceleration test results and laptimes from two major American outlets (Car & Driver and Motor Trend) as well as British mag evo. Those results are printed in 0-60.
#5 – DRIVEN: Every single test car that passes through GoodCarBadCar is reviewed in Driven, such as the Volvo XC70 already mentioned.
#6 – RECALL: Attempts to stay on top of recalls drives The Good Car Guy nuts. The job is never complete and different statistics appear all over the web. NHTSA recalls affecting personal vehicles of the recent past are in this section. 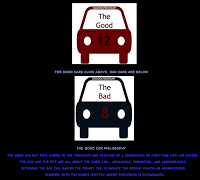 #7 – SKODA: What’s more interesting, that Skoda beat out all other automakers for GCBC popularity this summer or that it ironically placed one spot ahead of the iconic Chevrolet Camaro? The Czech manufacturer, a Volkswagen underling, makes some nice cars, many of which frequent these pages.
#8 – CAMARO: Typically, The Good Car Guy cedes individual model names to the manufacter. Sometimes, labels form for cars like the XC70 or new Camaro. Hot car.
#9 – RACING: Though this space is usually filled with Formula 1-related stuff, other racing talk seeps in sometimes. This is where online viewers from all over the world come to find out where they can view F1 races online. Last Sunday, they viewed the Belgian Grand Prix live at GoodCarBadCar.net.
#10 – TOP 5: Obviously, the Top 5 label holds lists of Top 5s. It could be the best vehicles for prominent Olympic athletes or the most-leased vehicles or the makers of the most dependable powertrains.
And who is this Good Car Guy? Find out here or by clicking on the link on the right-hand column.