North America isn’t the only continent where Toyota is criticized for building boring – but better – cars that happen to be rather successful. When you first heard about the Scion tC, you might’ve also heard the odd mention of the Toyota Avensis. Parts were shared, architecture crossed the pond. There’s a new Avensis in Europe, and while always a little more interesting than the last, this isn’t a visual stunner.

Built in Britain, the Avensis will, as expected, feature engines that Toyota says will, “that are both more powerful and emit less CO2.” The car won’t go on sale until the beginning of 2009. For details on the current Avensis and to remain slightly bored, have a look at the British Toyota site.
Meanwhile, Toyota also wants buyers to latch onto a more interesting vehicle in early ’09. The Urban Cruiser will compete in a segment that, in Europe at least, has doubled in size since 2002. Toyota likes to refer to it as an urban all-roader. CO2 emissions should be somewhere under 140g/km. That’s good. Perhaps the sale of a Scion xD 4×4 in America would help Toyota seize buyers who are drifting from SUVs but want…. an SUV.

Spanish automaker Seat, a subsidiary of the world’s third biggest automotive conglomerate Volkswagen, has released images of its 180 horsepower twin-turbocharged Ibiza Cupra. Cupra is the Seat equivalent of BMW’s M or, more likely, Chevrolet’s SS. In size terms, the Ibiza is a Toyota Yaris competitor. In performance terms, this juiciest Ibiza takes it to a corporate cousin or two (Volkswagen Polo GTI for one) while ride quality is likely – I only said likely – about as stiff as John McCain at his vice-presidential introduction rally.
Seat equips the Ibiza Cupra with a direct-shift gearbox. The tiny 1.4L engine should be a boon to eco-savers who still want fun-to-drive cars. Read more about the Ibiza at their UK site. 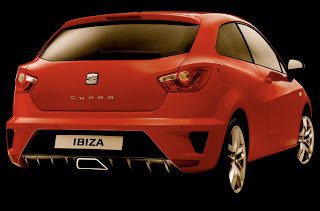