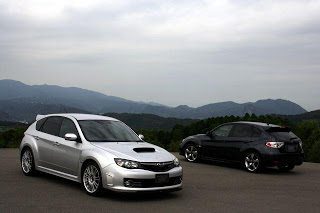 Subaru’s latest Impreza is likely the best Impreza yet. It may well appeal to a larger cross-section of consumers than did any Impreza before it. Yet it still managed to meet with harsh criticism, regardless of the market into which it was delving. The Brits bemoaned what they thought was going to be the lack of a proper WRX, North Americans derided its dull styling, and everybody united to declare its carryover powertrains as insufficient.

Behold, the Subaru Impreza WRX STi. Japanese STi’s still battle with a rally-derived and turbocharged 2.0L flat four, which now produces a heady 304 horsepower and 311 lb-ft of torque. The last STi to cross the Pacific to North America was a sedan, powere

d by 2.5 litres of horizontally opposed cylinders; four of them, turbocharged. 293 horsepower and a similar torque figure propelled the old STi to great heights.

The latest STi must still battle its old foe, Mitsubishi’s Evolution. The Evo is Lancer-based. Considering the growth and maturity evident in both the base Lancer and base Impreza, expect more refinement and comfort in the Evolution and STi during this generation’s tenure. Fortunately, the STi manages to continue its manifesation of all things boy-racer and aggressive. Be ye thankful. A soft STi is as welcome as a boy-racer Cadillac.