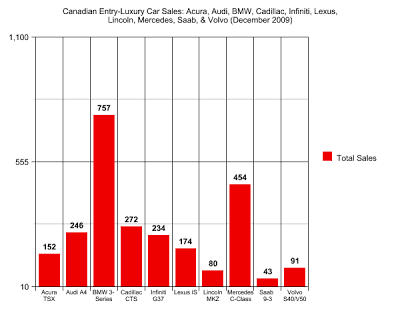 Home
All Vehicle Rankings
Entry Luxury Car Sales
BMW 3-Series sales weren’t nearly as high in December as they were in November, but the 3-Series still managed to say to its rivals, “Get up on outta’ here”. Combined sales of the Volvo S40 and V50 failed to top 100. The same could be said of the Saab 9-3 and Lincoln MKZ. Were the Japanese trio (Acura TSX, Infiniti G37, Lexus IS) to join forces, the BMW 3-Series still would’ve been the better seller in December…. by a couple hundred units.
Viewing the Graph below must be discouraging for BMW’s rival automakers. Infiniti and Audi know they have class-competitive products, yet the Canadian consumership isn’t beating down their doors. Month after month of Sales Stats posts are released on GoodCarBadCar.net, and the BMW 3-Series never fails to sell better than the opposition.