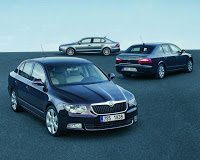 Volkswagen-owned and Czech Republic-based, Skoda has passed the first test of its reborn life (credibility) and is on its way to becoming a power player among Europe’s mainstream car brands. Funky designs like the Roomster and innovative solutions such as the trunk/hatch of the new Superb are part of what makes Skoda more than just a cheap Volkswagen alternative.

Skoda sales were 19.4% higher last month than in February of 2007. Combined January and February sales were 17.8% higher than during the first two months of last year; at 105,179. Thank its home market, Germany, and the ever-emerging consumership of Russia. Czechs bought 4,780 Skodas in February; Germany registered over 8,000; and Russians registered just over 3,000.
See all Skoda-related posts with a click right up on in here
Skoda’s 58,838 monthly sales just a few months earlier in October were considered a massive jump. It was indeed a 15% increase over the same period of the previous year. Skoda was smart to delve into the Chinese market and sold 27,000 cars there last year in a 12 month period in which they sold 630,000 cars worldwide. With months like February under their belt, expect the head honchos to be very pleased when those six figures are easily eclipsed.
In the Czech Republic, Ford and Volkswagen compete for second place while Skoda takes one third of the market share.