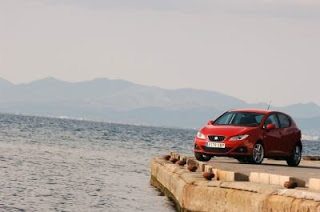 Well, one of those awards may well be the CCoty from the Netherlands. Yes, the Dutch like their compact cars, and apparently they like them with Spanish flair. Beating out Ford’s excellent new Fiesta, the Mazda 2, a beautiful Alfa Romeo known as the Mito, Dacia’s Sandero and the not-at-all-widely acclaimed Chevrolet Aveo, Seat’s 2009 Ibiza becomes the Compact Car of the Year in the Netherlands.
(Read all Seat-related GCBC posts here)

Say the deciders: “The Ibiza is one step ahead of its rivals, and the difference can also be seen in the interior, where passenger compartment comfort is second to none.”
For those not aware of Seat’s background, the Spanish automaker is a Volkswagen subsidiary. The Ibiza is about one size down on the Volkswagen Rabbit that we receive in North America, sharing architecture with the VW Polo and Skoda Fabia. The Ibiza in this CCoty contest was an 85-bhp 1.4L model. Obviously diesels are a popular choice, and horsepower can be as high as 180 in the Cupra model. Three and five doors are available.
Up one rung from the Ibiza is the Leon. The handsome Alteo and awkward Toledo seem to attack a similar market. The Alhambra is basically the same vehicle as Volkswagen Sharan and the Ford Galaxy. The Seat Exeo will be at the top of the rung. With the introduction of the new Audi A4, the Exeo is basically the older A4 reincarnated as a Spaniard instead of a German.