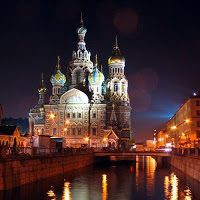 Oh, America moans and groans and protests when Vladimir Putin exercizes far-reaching authority in Russia. True, Russia isn’t a big fan of American fighter jets escorting planes away from Alaska and back toward Russia. Admittedly, there have been some tension-filled issues between the two powers over the last 10; 20…. OK, 50 years.

But a new Russia is emerging. A Russia with McDonald’s, soaring wealth, vast oil production, and Toyota Camry manufacturing?
This is starting to sound like middle America. Hey, after all, what’s more American than a Big Mac spilling its contents on the cloth seats of an ’01 Camry?

Russians pay for their Camry privileges. The advent of St. Petersburg Toyota production will bring prices down 9% but the Russian Camry will still sticker around the equivalent of $33,000 USD. The northwestern Russian plant won’t build more than 20,000 Camrys at first. As in America, expect heady acceleration toward 200,000 per annum.